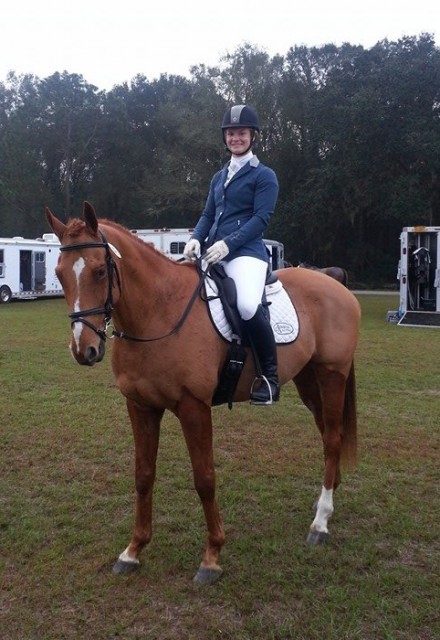 EN last caught up with Leah Lang-Gluscic and her superstar ride, AP Prime, on our EN’s Got Talent series last year. To recap, Leah took a leap of faith and quit her job in the finance industry three years ago to become a full-time professional eventer, and she hasn’t looked back. She now has a thriving business and is spending the winter months in Ocala this year. Leah had a stellar 2013 season with AP Prime and now has a few younger horses coming out to stretch their legs early this season. Leah was kind enough to update us on her whirlwind year last year and her plans for 2014. 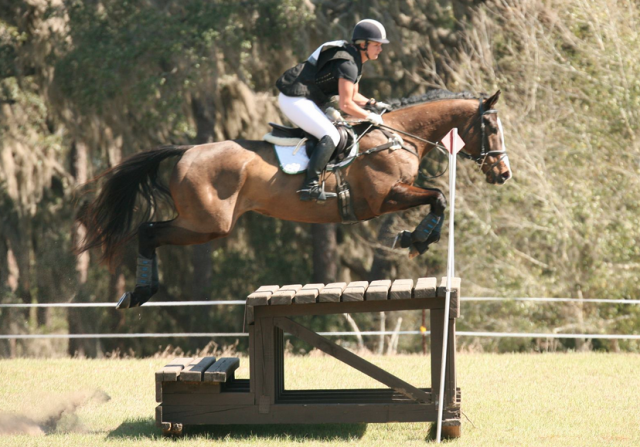 AP Prime, an OTTB Leah has produced herself, capped off a successful 2013 season with a top 20 placing in the CCI2* at Fair Hill. One of only 10 horses to run a double-clear cross country, Leah was extremely proud of how far AP had come. “At Fair Hill, he skipped around cross country like it was absolutely nothing because he is such a machine. He’s very naturally fit; he left the vet box after cross country before two other horses that had come in before him.” Leah said.

“Jon [Holling] was warming us up for show jumping the next day and warned me that I might have to ride a bit harder than I normally do, and he was absolutely wild,” Leah said. “I should have taken him for a gallop before show jumping!” Leah said that AP’s usual competition schedule allowed for about one run a month, and this year he will kick off with one run at Intermediate followed by a move up to Advanced at Red Hills, if all goes according to plan.

Leah has been working hard on dressage with Peter Gray during the off season in the hopes of helping AP through some tension that has held some scores off the table previously. As far as the move up to Advanced is concerned, Leah couldn’t be more excited. “I don’t think he will even notice that he’s moved up, to be honest,” Leah said. “But maybe he will just be a bit more rideable when it comes time to show jump.” 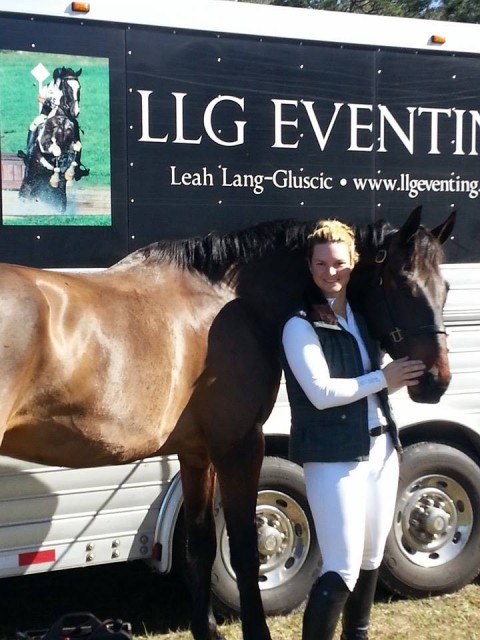 Leah has also been able to take on a few sales projects as the 2014 season kicks off. “They are all so nice and great quality that whenever a couple of them sell, I will probably keep what is left for myself,” Leah said A Novel Romance, “Pogo”, is one of Leah’s young horses who competed at the Ocala Horse Properties Horse Trials this past weekend. Pogo is a 5-year old Hanoverian/Thoroughbred gelding who began his season at Novice. “Pogo was uncharacteristically naughty during dressage at Ocala, but even at his worst, he still scored a 34.” Pogo will likely move up to Training this year after a few more runs at Novice. You can check out Pogo’s performance on cross country in the video below.

Of Course Carter is another one of Leah’s sales horses that came out to play this weekend. Carter is a 6-year old Thoroughbred gelding who shares AP Indy bloodlines with AP Prime. “He is a slightly better mover than AP and is very scopey,” Leah said. “He went double clear on cross country and will probably be ready for Training after one more run at Novice.” Carter finished up third in the Open Novice at Ocala this weekend, and you can check out his dressage test by clicking here.

Like many of her peers, Leah had nothing but good things to say about the first competition of the new season at Ocala. Even with a torrential downpour on Saturday night, the event went off without a hitch. Leah was impressed with the caliber of the Jay Hambly cross-country course as well. “It was a really good track. A lot of early season Novice courses are slightly bigger Beginner Novice courses, but this one had a half coffin and a baby sunken road. For two horses looking to move up, it was a really good run for both of them,” Leah said.

One of the reasons why Leah has been able to cultivate such a successful environment in Ocala is her “working student extraordinaire” Patrick Zinck. Patrick is a one-syar rider who came to Leah from Tudor Oaks Farm in Barrington, Ill. “He has totally changed my business and what I am able to do,” Leah said. “Normally, I go to a horse trial and do everything on my own and am exhausted by end of the day. I go with him and hardly feel like I went to a horse trial. Everything is so productive. This weekend, I was able to go to the show and come home and ride the rest of the horses before the end of the day. So it’s been a real treat.”

After going pro three years ago, it looks like Leah is well on her way to accomplishing her goals. With established competition horses like AP Prime and plenty of young horses in her arsenal, Leah has all of the makings of a force to be reckoned with in the coming seasons. Best of luck to Leah and LLG Eventing as the 2014 season gets into full swing.