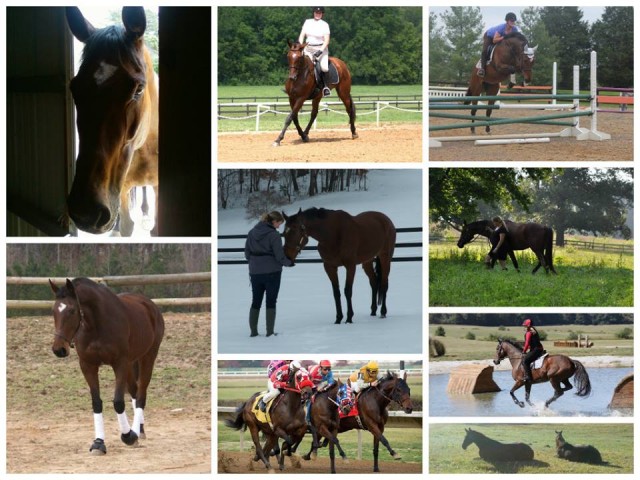 For about two weeks, I’ve been trying to figure out how to write about my mare without just telling a sad story about losing a horse. As I have considered all the things I am thankful for during this time of year, my time with her keeps coming to mind. As many horse girls do, I sort of have two sets of friends: my horse friends and my non-horsey friends. When I posted on Facebook about having to euthanize my mare due to a catastrophic knee fracture, my horse friends immediately knew and truly understood what a hard decision it was and the sadness I felt.

They called and texted and cried with me and sent me pictures that they had of her and brought champagne to the house and watched movies with me in pajamas to take my mind off of such a bad day. My non-horsey friends said sweet things and asked carefully worded questions about what had happened and compared losing her to losing their dogs. I know that they meant well and that dogs are such an important part of our families, but if you aren’t a horse person and if you have never had to make the decision to put a horse down, then I think you just don’t get it. Unless you’ve really known a horse, you can’t understand.

As I answered their texts and tried to explain why I was avoiding everyone and being anti-social (I prefer to grieve privately), I realized how lucky I was to even know this depth of sadness, because this depth of sadness meant that I had also felt such an incredible amount of happiness.

My time with Jazz began in a very transitional time in my life. I had graduated from college, moved to a suburb of Atlanta, gotten a great job, gotten engaged, and was in the process of planning a wedding and buying a house while also going back to school for nursing. While everything seemed to be exactly as it should of been, I was under a great deal of stress. Looking back five years later, I wasn’t ready for much of those life changes, and beginning and ending my day at the barn with my big bay mare was perhaps what saved me from a nervous breakdown and gave me the strength and courage to make the life that I really wanted. That horse and my dogs were EVERYTHING to me, and turns out, being at the barn with Jazz was the only time I truly felt like myself.

Jazz and I never had an incredible amount of success in the show ring, but it didn’t matter. Most of the time, I would save what should have been grocery money to be able to buy hay, so showing wasn’t really in the budget anyway. She also wasn’t ever really that easy to ride. After 67 starts on the track, she was a bit set in her ways, wasn’t EVER going to stand still at the mounting block and didn’t much care for the stretchy trot, regardless of the methods used to coax her. If you were smart, you wouldn’t get on without lunging her, and you learned very quickly to pick your battles VERY carefully.

She was a 7-year-old pro ride who mostly acted like a 3 year old under saddle, measured 16.3 and 3/4 hands and had quite the independent spirit. But I loved her for everything that she was and wasn’t. She was athletic as heck and beautifully put together. She was one of those horses that people would see in a warm up and just walk right up and ask about her. She was incredibly beautiful and could look right through you with an air of class and wisdom. She wasn’t much for affection and could never be called a “packer,” and if you hauled on her mouth, she would teach you a thing or two about being a polite rider. She nickered at me twice while I had her, but those were perhaps the two most important nickers I’ve ever heard.

Never in my life have I felt a gallop like hers, and I probably won’t ever again. Working all winter when I first got her over poles and tiny gymnastics was so incredibly worth it the first time we jumped a full course. She was a great jumper, and she never said “no” to giving something a try. She would prick her ears and visibly hunt when I took her out with hounds, and she would swim across a river or patiently walk on a hack, making a spooky horse feel more comfortable.

I could list the experiences we had and how special she was to me all day long, but the point is, sometimes I forget that there are so many people that never get the chance to know a horse and love a horse at all, much less with the intricacy that I knew her. How lucky we are to get to know these amazing animals at all. My non-horsey friends often think that they are all the same or that they are somehow dumb or emotionless. Nothing is more inaccurate. Horses are the only thing I can think of that bring me such pure happiness. There are just so many people that will never get to know that happiness — just simple, basic joy.

I always hope that there is something in the life of my non-horsey friends that makes them as happy as horses make me. I know a life with horses isn’t for everyone. But between us, I think getting to know a horse is one of the biggest gifts I’ve ever known, and I’m so far unconvinced that there can be anything better. So even though I hate the way her life ended, and I hate the way it makes me feel right now when I think about the details that were uniquely hers — her ears, her smell, her sweet eye, her feet, her piercing whinny, her mannerisms and the rhythm with which she always ate her breakfast — I know that even though my eyes fill up with tears and my throat tightens at these little memories, I’m incredibly thankful to have them.

If your family is like mine, we all say something we are thankful for just before our meal together. I know when it’s my turn, I won’t be able to tell them how I really feel this year, but I’m glad I got to share it with you, the ones who really get it. So today, hug your horses, eat turkey and be thankful for the time we get with these incredible animals.