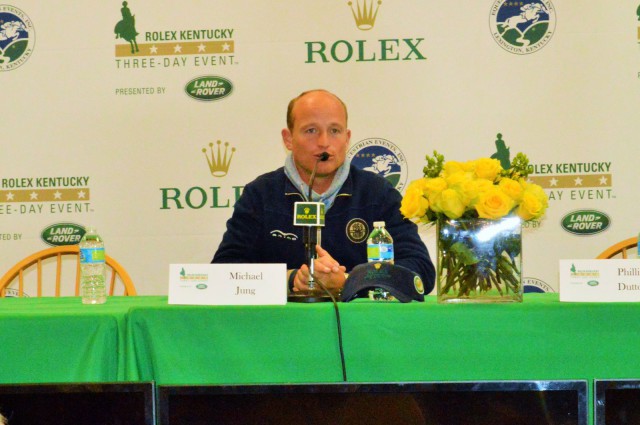 Day 1 dressage, man. That’s a tough leaderboard to be sitting atop.

You’ve done all you can do — and you pretty much owned it — but you can’t go basking too hard in your glory because there’s no telling no telling what tomorrow will bring.

So what’s the appropriate response? When you earn a perhaps-permanent, perhaps-fleeting moment in the sun, do you step back and admire your tan in the mirror… or do you slather sunscreen all over that pale pokerface you’ve perfected the art of wearing?

Laine Ashker laid down the test of a lifetime to earn herself a seat between two of the world’s most decorated eventers. Currently sitting in second on a 44.2 with Anthony Patch, she was radiating “happy” across the room full of journalists.

“I feel amazing,” Laine enthused. ” It’s a little bit like a dream come true. This is my eighth Rolex, I believe, and my first time in the press conference so this is pretty awesome. There’s a first time for everything! I’m extremely elated with Al’s performance and it seemed to sort of all come together today.”

We picked up on that when we saw her getting a little teary-eyed exiting the ring. One tongue-in-cheek reporter asked, “Was that an allergy?”

Laine confirmed that they were, in fact, tears of joy: “I was a little emotional. I try not to let my highs get too high and my lows get to low, but it’s been a long time coming.”

You go get yours, girl.

His Own Harshest Critic

“I was pleased-ish,” he explains. While Fernhill Fugitive’s test was, he admitted, “about the best test he’s ever done,” he’s still kicking himself about his other ride.

“Fernhill Cubalawn started off great and I think I just went for it a bit too much,” he said. “The pressure of that got to him a little bit and he lost it in the canter so I think I could have done a little bit better job there.”

We’re disappointed in you, Philllip. JK! At least he’s got another chance at straight 10s tomorrow. “As for Mighty Nice, I hope he beats them tomorrow,” he says. “He’s working well and there are a lot of good horses going tomorrow so I think it’s shaping up to be an exciting competition.”

When your goal is to beat yourself, and you’re already in the top three, you’re probably on the right track.

Speaking of beating oneself, Michael Jung has a hard act to follow tomorrow. His morning ride today on fischerRocana FST soared well ahead of the pack on the wings of a 39.3.

When a reporter point-blank asked him which of his horses he thought would end up on top, Michael did what any good horse dad would do: refused to play favorites.

After praising his mare for a “calm and quiet” test, he stood his neutral ground. “Today she is the leader but tomorrow we will see,” he said. “Sam is in very good form but you never know.”

The last time Michael competed stateside was in 2010 when he won WEG Gold here at the Park. Will Ze Terminator repeat history here this weekend, perhaps even pack a one-two punch?

“We will see,” he repeated. A cool cucumber, indeed.