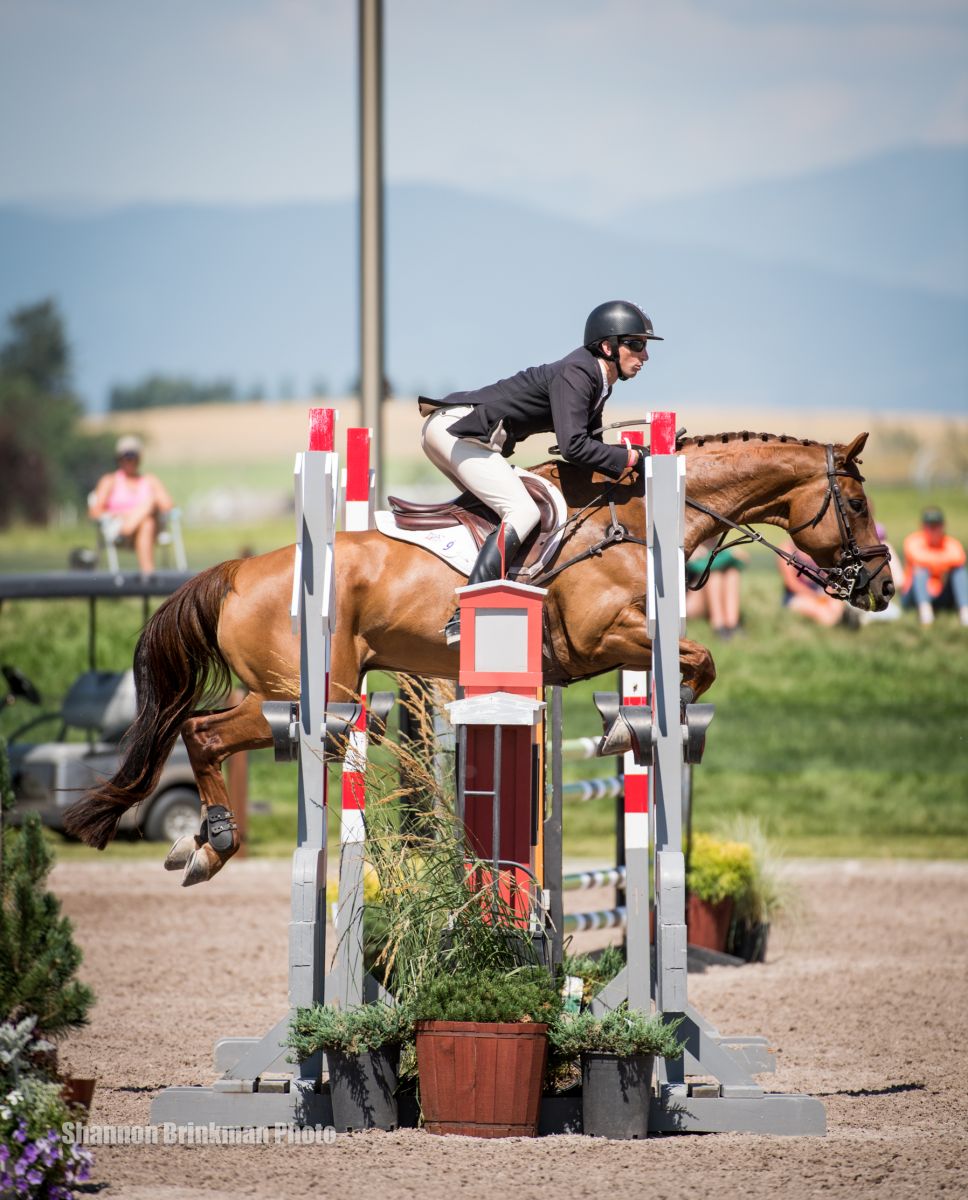 Asked to choose a word to describe the newly-crowned CCI4*-L winner of The Event at Rebecca Farm, what pops immediately to mind is “eager”. One just has to steal a glimpse of the eight-year-old Canadian-bred Nemesis (Novalis 46 – Maesy), partner of James Alliston since his yearling days, to see that expression: ears pricked, eyes bright, a hungry, hunting look on the face.

It’s certainly the feeling you want to ride, and that eagerness has translated into multiple successes for a gelding only seeing his first full Advanced season here in 2022.

In April, James tossed Nemesis, whom he and his wife, Helen, purchased sight unseen from breeder Danielle Burgess out of British Colombia, on the trailer for a trek to Kentucky from the Alliston Equestrian base in Northern California. The aim was the Lexington 4*-S, held in conjunction with the Land Rover Kentucky Three-Day Event, but James didn’t hold high expectations for what would be a definitive step up for the horse. 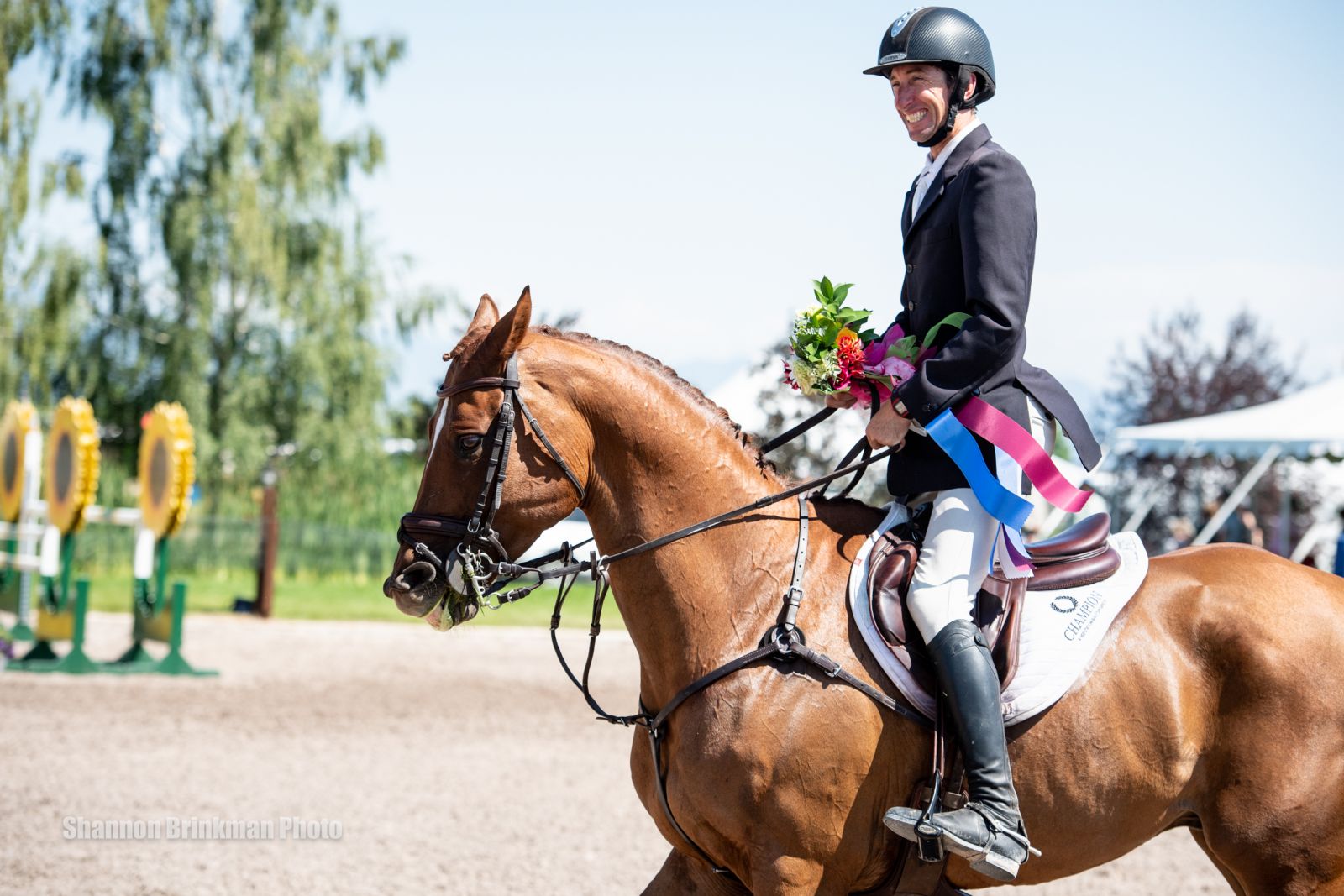 The pair wound up third — James looking pleasantly surprised to find himself in the press room, stuffed Chinch in hand — at Kentucky, and Nemesis had officially announced his arrival to the big leagues.

This weekend, the gelding once again rose to the occasion and showed a maturity beyond his years, creeping up the leaderboard to eventually seal the win in his first 4*-L this afternoon in Montana (he seems to like this venue: he also won the 3*-L here last year). In total, the pair added just two seconds of time to their dressage mark, jumping a fault-free round around a testing Chris Barnard show jumping track to end their weekend on a 33.7.

“I’ve always just loved him from the start,” he commented. “He just has an intelligence about everything he does…he’s always had that, from the get go. I think I always could feel the quality he had. We’re excited to have him, I think he can do anything.”

As for what’s next? Well, James noted in the post-competition press conference, it’s important to remember that the gelding is just eight this year. So there’s no rush — James said he’ll likely plan to do at least another 4*-L before thinking about what’s next. Given the impressive stature of Nemesis’ success as an Advanced horse thus far, it’s not difficult to imagine a future 5* in the cards. 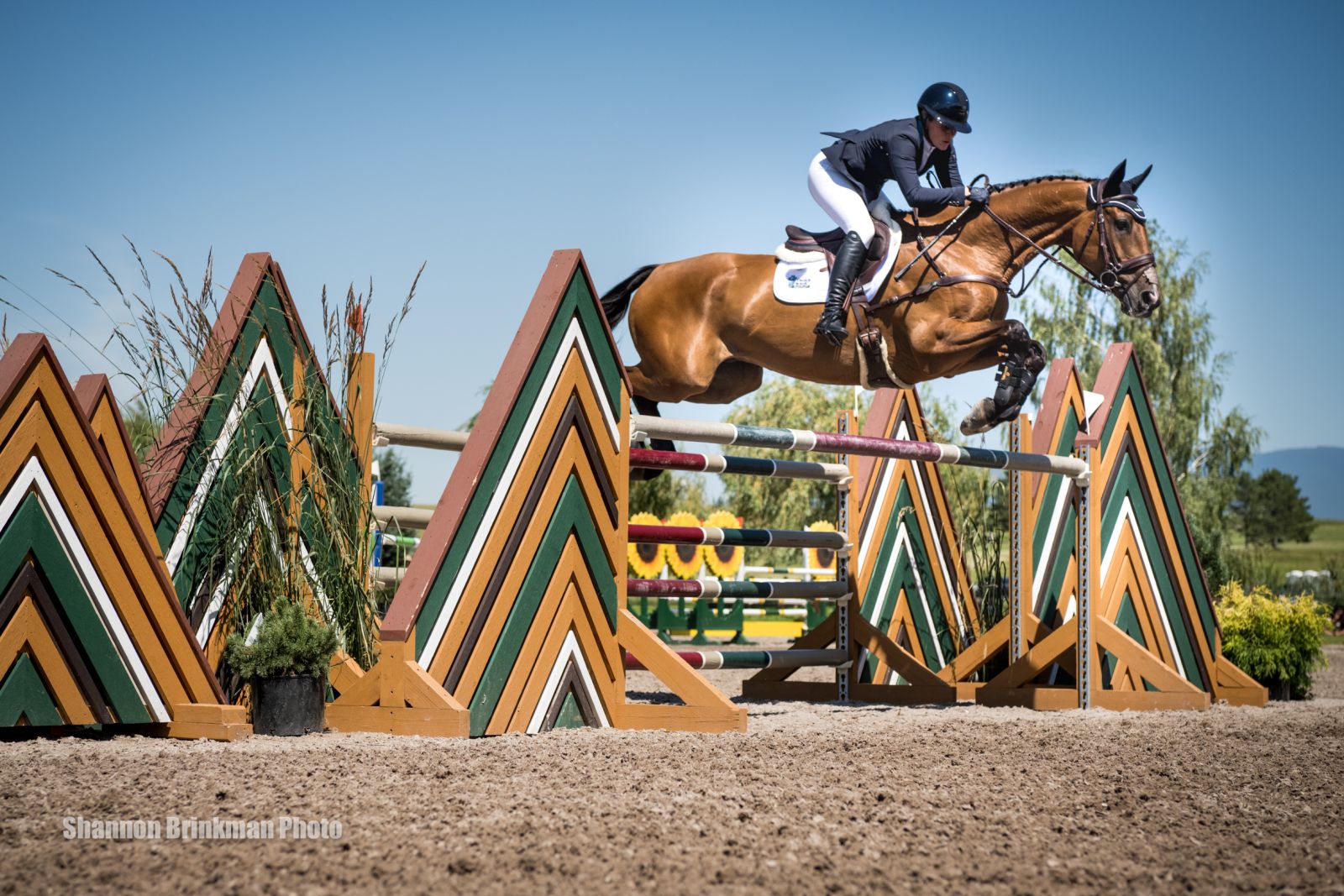 Alyssa Phillips and Oskar inch forward to a 5* debut after another solid 4* outing this weekend. Photo by Shannon Brinkman Photography.

A gutting rail at the final fence today would squeeze the win from Alyssa Phillips‘ hands, as she and Oskar got a shade too close to the front rail, sending it toppling and the pair into second place on the weekend.

This was the second 4*-L for the pair who won the inaugural Lexington 4*-S in 2021, going on to then finish second in their 4*-L debut at New Jersey that May. Now, Alyssa says she feels the pieces firmly coming together after making the difficult-to-catch time on cross country yesterday and jumping a nearly-clear round today. “I thought he jumped really well today,” Alyssa explained. “That was probably one of the best rounds we’ve jumped. For him to make the time yesterday and then jump as well as he did today show really big promise for the future. Now we’re just kind of doing it together.”

Third in what was a 4*-L debut for both horse and rider were Colorado-based Dani Sussman with the 11-year-old Argentinian Sport Horse gelding, Jos Bravio (Jos Fapillon – Remonta Guinea II, by Chiasso), owned by Dani as well as Carol Mavrakis. It’s been a life-long goal of Dani’s to compete in this headlining division at Rebecca Farm, so to finish in such good standing is the cherry on top.

“It’s been a life dream to ride at the four-star here,” Dani reflected. “I come every year and I’ve been fighting for this. It’s a little bit surreal.”

“This little horse is incredible,” Dani said, noting the gelding’s unorthodox jumping style. “He is an amazing competitor; he is all business all the time, and he’s just so fun to ride.”

Liz Halliday-Sharp can count on one hand how many times she’s jumped a full show jumping course with her newest partner, Debbie Palmer and Ocala Horse Properties‘ Miks Master C (Mighty Magic – Qui Luma CF, by Flyinge Quite Easy 958), but enthusiasm and experience were enough to cement a second consecutive FEI win for this pair, this time in the 4*-S on a final score of 30.7. This also marks a second consecutive victory in this very division for the 10-year-old U.S.-bred Swedish Warmblood, who won here in 2021 with former rider Maya Black.

“He’s probably one of the best horses I’ve ever sat on,” Liz remarked, even drawing comparisons to her 5* partner, Deniro Z (who is reportedly going to be just fine but sustained a heel bruise on cross country yesterday, prompting Liz to withdraw him before show jumping). “Maya produced him beautifully, so props to her for that, and a little bit has been trying to make him my own and make our partnership work and just figure him out, really.” 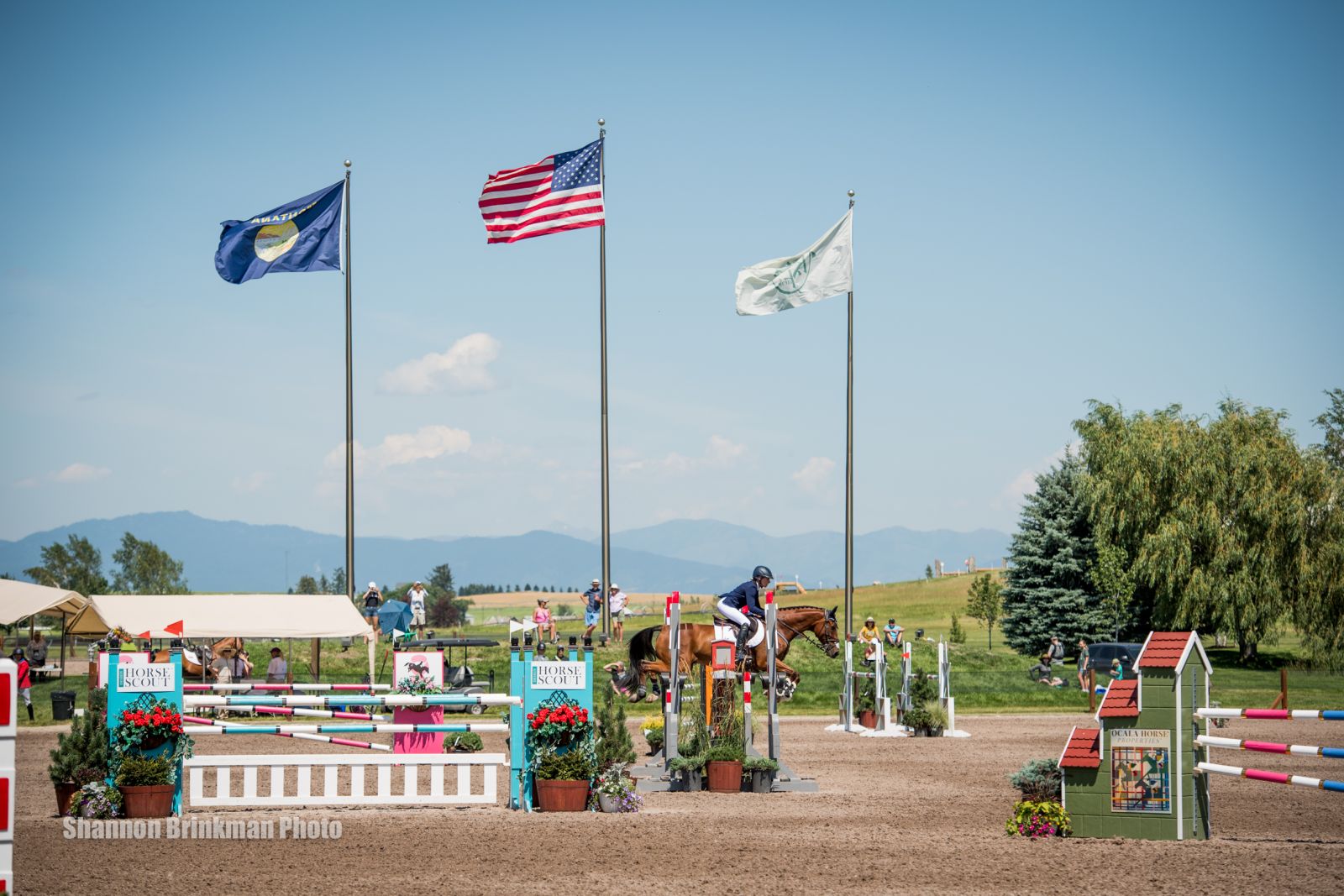 Liz Halliday-Sharp caps off another successful trip to Montana with a win in the 4*-S aboard Miks Master C. Photo by Shannon Brinkman Photography.

Liz observed that she had yet to find the best bit set-up for the gelding, noting that she felt she hadn’t quite found the right tools for the jumping phases this weekend. Nonetheless, she said, this weekend gives her a good feeling for the future — wins are what we work for, but we also work to get to know our horses better and to learn new information on how to be their best partner with each outing. “I’m just so grateful to Debbie and Ocala Horse Properties for helping bring him on board,” Liz continued. “Sometimes the universe brings horses your way, and I think this is one of those occasions, so this is one step towards the future so I just need to ride him better.”

Second and third on the 4*-S podium is Tamie Smith — who may or may not be obsessively refreshing her phone these days as we await notification of World Championships team selection — with Julie Guariglia’s Solaguayre California second (34.7) and Ruth Bley’s Danito third (37.8).

Tamie noted that the 11-year-old Solaguayre California (Casparo – Solaguayre Calandria, by Casall) came out on the greener side this spring, explaining that she felt the efforts at Boekelo’s 4*-L last fall may have affected her. “So I just took a little bit of a step back and chilled, took her around some easy courses,” Tamie said. She knew the first water — a big drop into the water similar to a question that undid the pair at Carolina International this spring — would be a solid indicator of where the sporty mare’s confidence lay. But the mare jumped in looking more seasoned than ever and like she fully understood the task at hand.

“She was just super,” Tamie said. “She answered everything great. She felt like a real professional all weekend.” 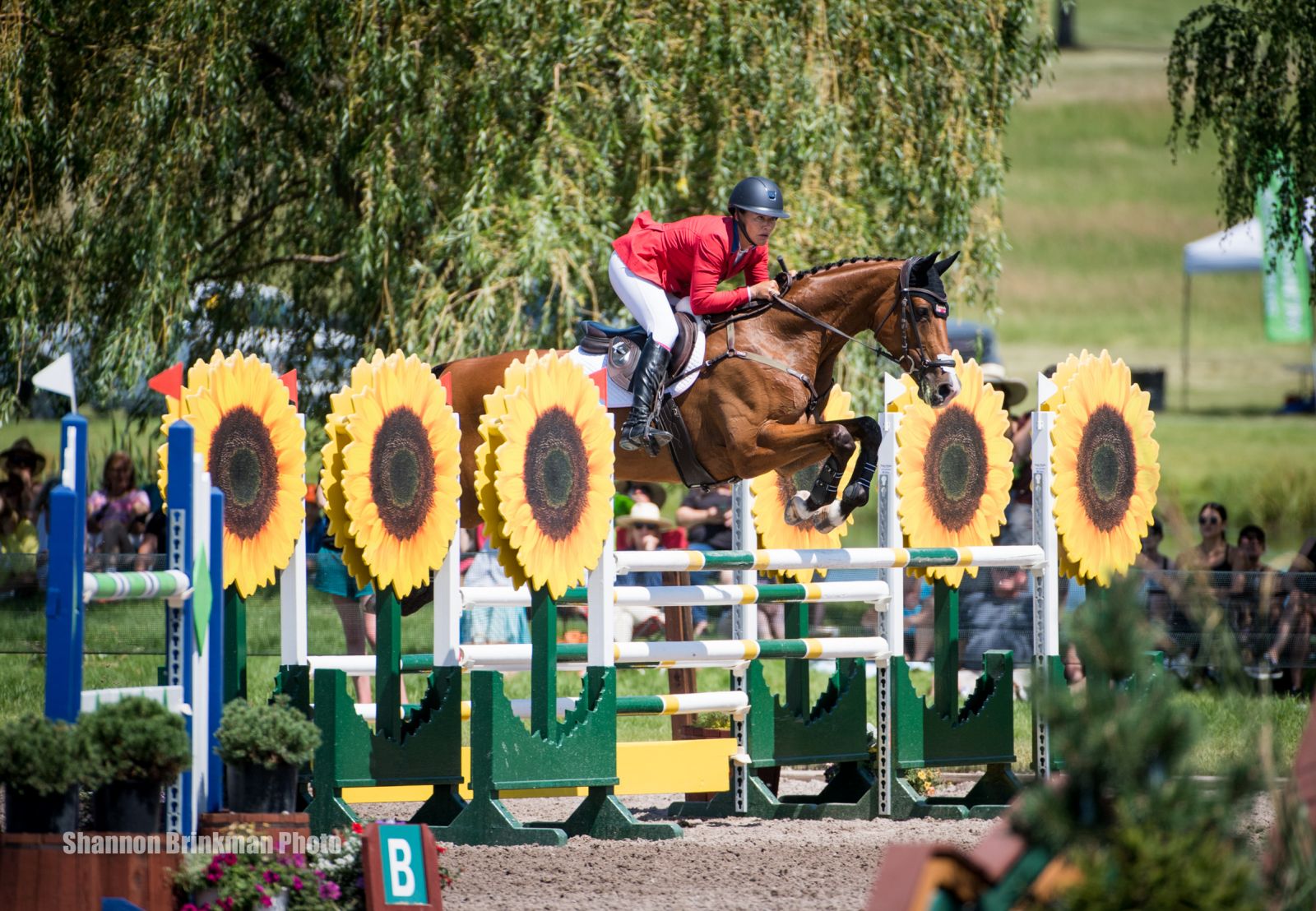 How does the saying go? Get a mare on your side and they’ll do just about anything for you? This seems to aptly apply to “California”. “She’s a spicy thing, man,” Tamie described. “She’s just such an opinionated thing, but she always goes in the ring and she always shows up and she always performs, and so I just keep being tortured on a daily basis because she is super talented and she tries — she knows when it’s showtime.” If that quote doesn’t sum up life with those #supermares we love (some of us more than others), I don’t know what does.

Everyone’s favorite “Cheeto Puff” Danito (Dancier – Wie Musik, by Wolkenstein II) made a successful return to competition at this level, notching a podium finish and feeling every bit of the five-star horse Tamie hopes he’ll soon be. After a freak accident in the cross-ties inflicted a wither injury on the 13-year-old Hanoverian gelding over the winter, Danito was given some unplanned time off. As a result, this weekend was his first competition back since finishing 10th at Boekelo in October.

“It was a bold move to put him in the four-star. I have to admit it, I pulled into the venue and went ‘ooh, did I make the right decision?'” Tamie said, expressing thanks to longtime friend and owner Ruth Bley for her continued trust in Tamie and her horse sense. “I’m glad that I did; I trusted that the training was there and he knows his job. And it was really nice to see him solidify that.”

“Something happens and you feel crushed about it,” Tamie said. “But he’s come back stronger and he feels like a five-star horse now. I’m excited about how well he handled everything.”

Looking to the other FEI divisions which also crowned winners this afternoon, the 3*-L belonged to Liz Halliday-Sharp with another relatively new partner, the eight-year-old Irish Sport Horse gelding Cooley Nutcracker (Tolant R- Ballyshan Cleopatra, by Cobra), who is owned by Ocala Horse Properties, Renee Lane, Deborah Halliday, and Liz. This weekend marks a fifth finish in the top two since joining Liz’s program, and they finish this one on a score of 29.4. 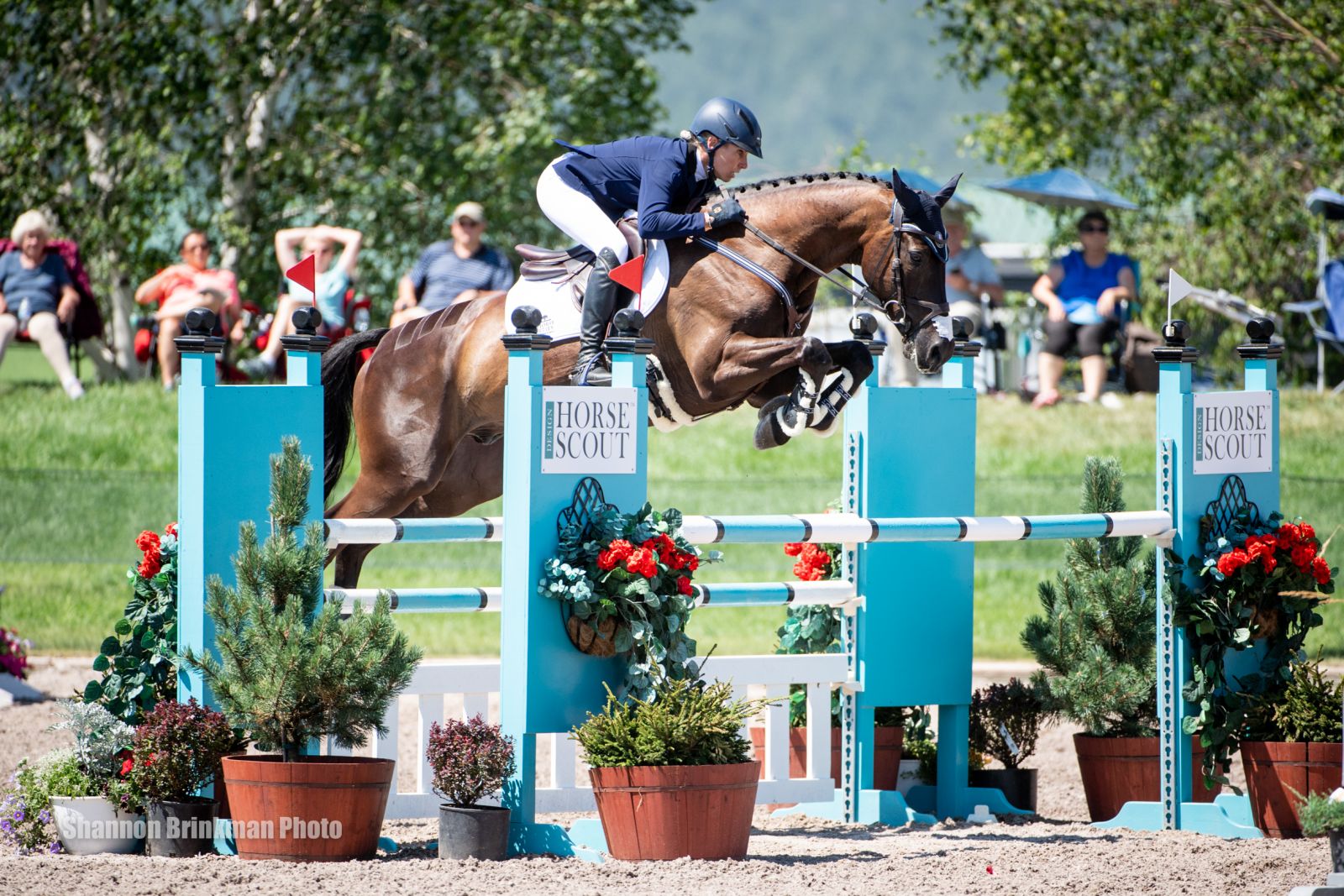 Canada’s Kerry Groot and her own 13-year-old Oldenburg gelding Borasco (Bravo – Fanja, by First Class) made a steady climb through the ranks this weekend to eventually capture the 3*-S win. It’s a first FEI win for Kerry, who ended the weekend with a double clear show jumping effort and a final score of 43.9. 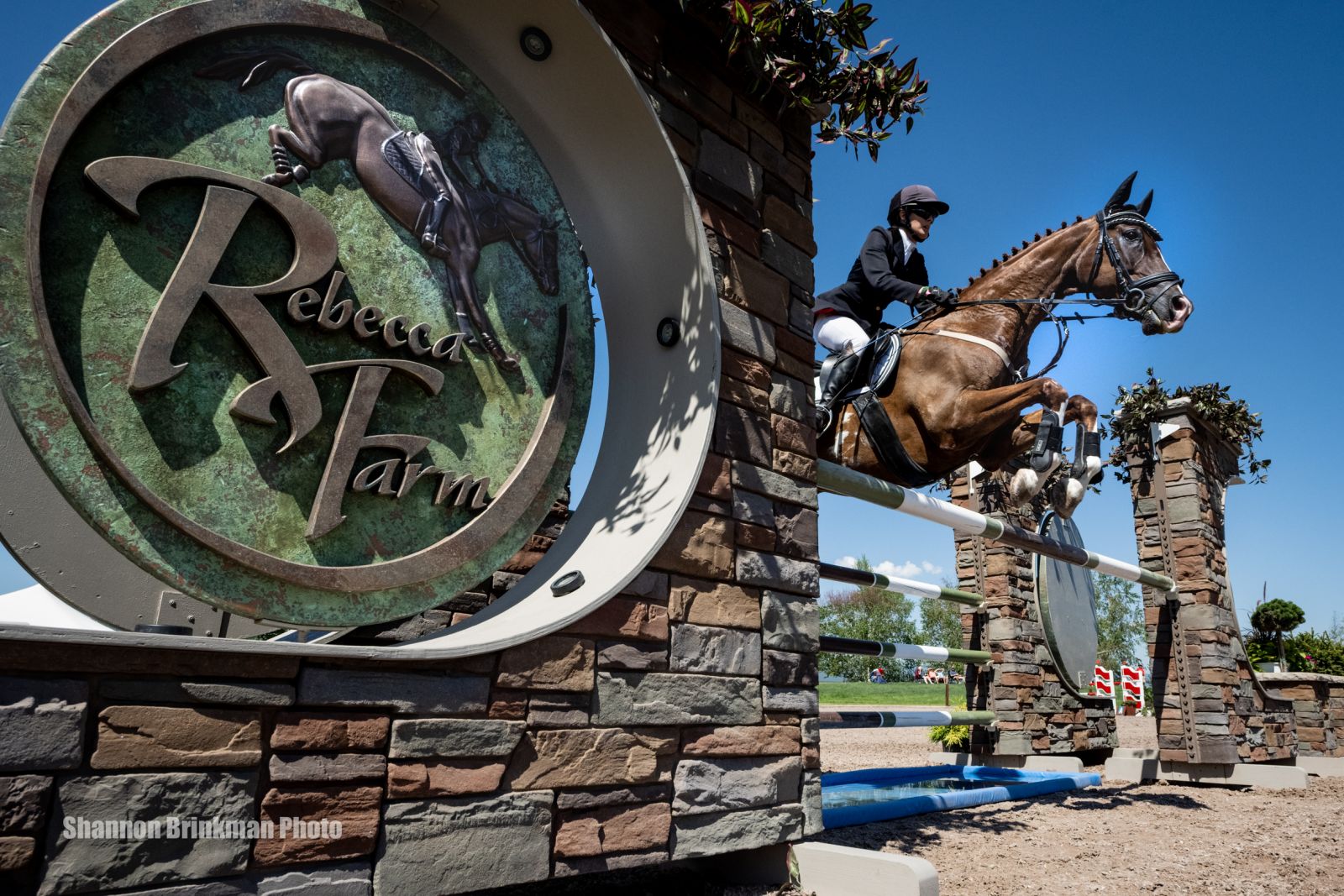 Chris Talley was another rider to make the trek to Montana with the help of a Rebecca Broussard Rebecca Farm Travel Grant, and he takes home a win in the 2*-L with the six-year-old Loughtown Cici ZA (CC Captain Clover – Castledawn Diamond Clover, by White Clover). The Irish mare made her eventing debut with Chris last year, qualifying for and finishing in the top-15 of the East Coast Young Event Horse Championships for 5-Year-Olds at Maryland last fall and caps off her second FEI event with a win on her dressage score of 31.2. 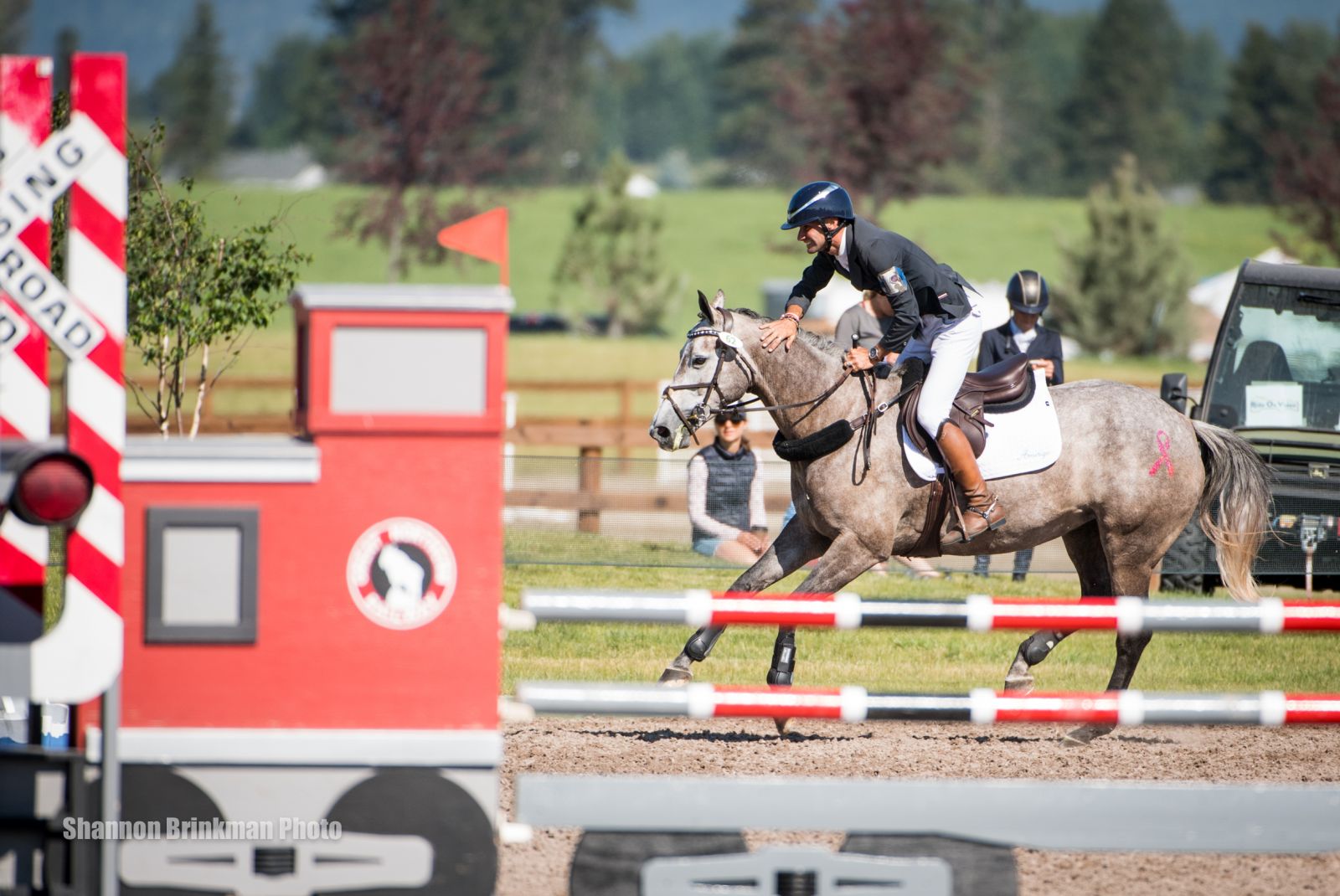 As always, a week in Montana is never a disappointment and as we cap off another year of coverage, both from on the ground and remotely, we’d like to express our gratitude to the Broussard family, who share their incredible venue with our community in service of the sport. The meticulous care of the ground (which received multiple compliments throughout the weekend, especially for this notoriously hot and dry time of year), the attention to detail for the horses and hot weather, and the spirit of camaraderie were just a few details that made this weekend remarkable. If you’ve not made it out to Rebecca Farm, I promise it’s a worthy stop on your bucket list.

We’ll update this article with more photos from Shannon Brinkman, this weekend’s official photographer (you can support her and order your photos here and your competition video from Ride On Video here), so watch this space. We’ll also have a couple of follow-up stories coming your way this week — including the score of who scoredd a 13.6 in the Novice dressage this weekend — from our awesome eyes on the ground, Erin Tomson. In the meantime, enjoy a few social snaps from the final day in Big Sky Country and as always, Go Eventing!