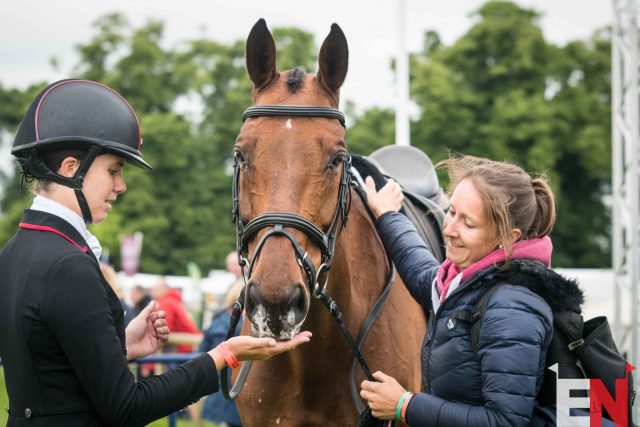 Another day packed to the rafters with dressage tests dawned on Bramham today, with yesterday’s high standards proving a worthy challenge to Friday’s competitors.

Wow – how cool is that 🤩😍🙈 19,4 points for Chipmunk FRH in our dressage at @bramhamhorse today and in the lead after day 1 🤭 obviously very very happy with him, he did make my job today very easy 🤷🏼‍♀️❤️ one day to relax now and then one proper xc test on Saturday 🙈🤞🏼 #dressage #dude #enjoythemoment #onephasedown #ontothenext 📸 thanks to @adamfanthorpe . . . . . @hannoveraner.verband @g.passier @samshield_ger_aut @neue_schule_bits

Despite the continental stronghold, British riders made promising moves on the top ten, with Pippa Funnell producing a quality test aboard Billy Walk On for a score of 26 and fourth place and holding eighth with MGH Grafton Street, while William Fox-Pitt and Oratorio sit in sixth place with a 26.7, just behind Kiwi Andrew Nicholson and Swallow Springs in fifth place. 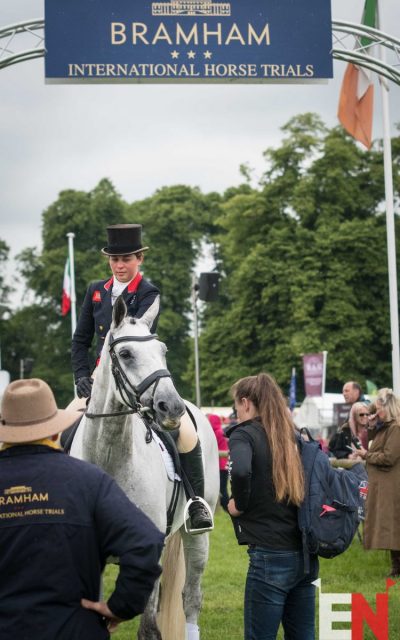 Kitty King and Vendredi Biats worked through some moments of spookiness to score 27 and sit in seventh place: “I think I’m just going to have to work him near more cameras,” she laughed.

Julia Krajewski maintains her hold on the senior CCI3* section at Bramham.

KING TAKES THE THRONE IN CCIU253*

Focus. By the incredibly talented @williamcareyphotography .

In the under-25 CCI3* section, Caroline Martin and Danger Mouse‘s lead was narrowly usurped by Britain’s Emily King, who rode her stalwart chestnut Dargun to a score of 25.5. Owned by Jane del Missier, ‘Dre’, as he’s known at home, has been produced from the 2* level by Emily. The pair have completed seven three-stars together, with their highest placing coming at Belton CIC3* in April, where they finished 18th. Dre’s score today is a personal best at the level for the horse, and the culmination of three seasons spent training the naturally relaxed horse to engage and perform at his best. The ten-year-old gelding is still relatively green at the level, with just two fault-free cross country rounds in his seven completions, but Emily, who finished fourth in her CCI4* debut with Brookleigh in 2015 with Brookleigh, is looking forward to tackling tomorrow’s cross-country course, wherein we may well see the ongoing education of Dre pay off further.

As it turns out, Dr Dre holds a commanding place in the inspirational GIF market.

Caroline Martin holds onto second place with Danger Mouse (26), while her second mount, The Apprentice, posted a 28.2 to slot into fifth place. This sits them within a tightly-packed selection of scores in the top ten – just one second on tomorrow’s cross country separates fourth and seventh place, promising a tremendous reshuffle on a course which will demand exceptional stamina from both horse and rider. 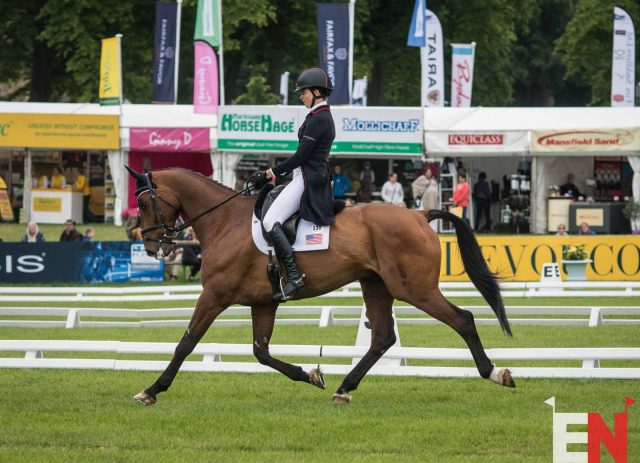 Caroline Martin and The Apprentice round out the top five. Photo by Tilly Berendt.

“Overall, the horse really performed, and he really handled the atmosphere – he was in front of my leg and he listened every step of the way,” says Caroline. “I was a little disappointed with the trot work; I felt that he got a little bit stuck. When I went to do my medium trot he was a bit spooky, so I figured I’d hold onto him a bit and get through the test, and then he relaxed.”

Caroline took over the ride on The Apprentice from Buck Davidson at the beginning of last season, and her test in this class last year earned the pair a 32.6 in only their fifth international together.

“The test today was way better, because last year I really didn’t know the horse, and it was our first time in a really big atmosphere. I’ve been getting to know him better, and I’m putting my buttons on him now. Buck and I are very different riders and I think that last year, Dirk got confused, which is why we ended up having our only run-out – I didn’t realise then how strong he can get.” 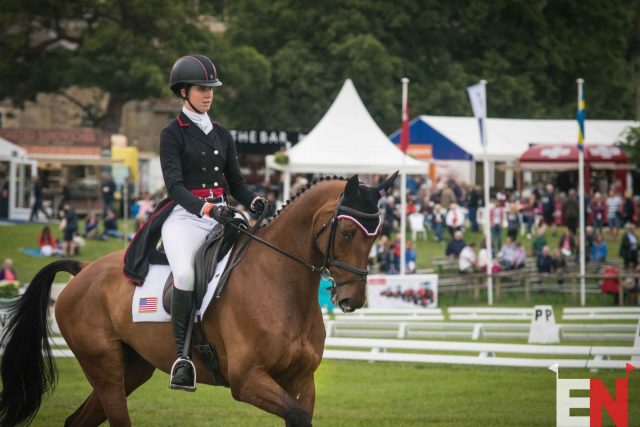 Caroline Martin adds another horse to the top five with The Apprentice. Photo by Tilly Berendt.

“I felt that the course really suited him last year, but actually, the reason that I brought him here was because I broke my foot and so didn’t run him at Kentucky. He’s the sort of horse who needs you to be 110% on your game, and so Leslie Law and I decided to reroute him here. It works really well in the schedule for me, and it’s really a good three-and-a-half star.”

Despite having prior experience with The Apprentice here, Caroline is happy with the drawn order, which makes her the under-25 pathfinder with Danger Mouse.

“When people say it’s important to produce your horses to the upper levels, it really is true – I know Danger Mouse so well. I feel honoured riding The Apprentice, but producing them from scratch helps a lot.” 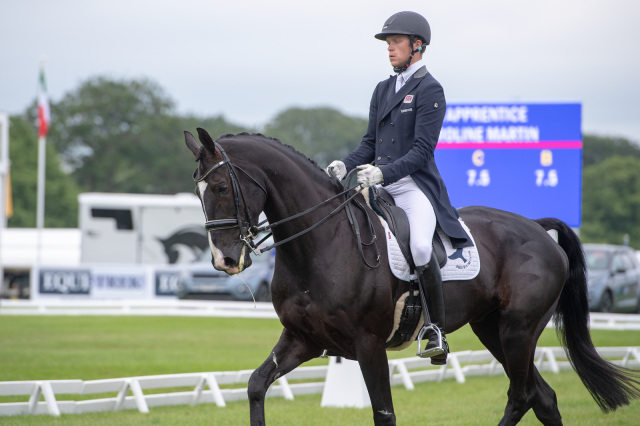 Caroline and Hallie will go cross-country tomorrow at the following times:

The top ten at the conclusion of dressage in the under-25 CCI3* section at Bramham.

The British contingent hold a strong majority in the CIC3*, with the top three unchanged today. The relatively inexperienced No Excuse (24.4) remains atop the leaderboard with Ros Canter, although, Ros explains, “realistically, the time might be a bit too tight for him on the cross-country this year – but he’s an exciting horse for the future.” 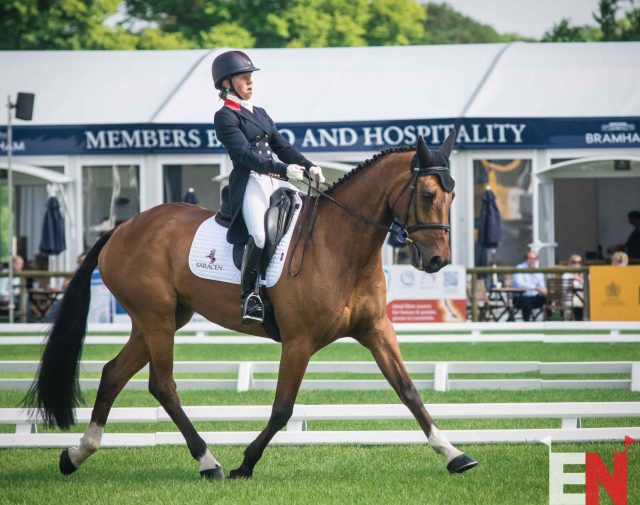 Ros Canter and No Excuse top the CIC3* after dressage. Photo by Tilly Berendt.

The infamously swift Izzy Taylor holds second place on 24.5 aboard last year’s Blenheim ERM CIC3* winner Be Touchable, who was produced through to the Intermediate level by his owner, Sophie Dodds, before her university studies prompted a change of rider in 2015. The twelve-year-old Dutch-bred gelding has demonstrated an incredibly consistent streak, finishing first or second in each of his five international runs – each at the CIC3* level – since mid-2016. Unlike No Excuse, Be Touchable is quantifiably experienced at this level, with three years of mileage, with three FODs and an average of only 2.4 time penalties from five three-star completions. 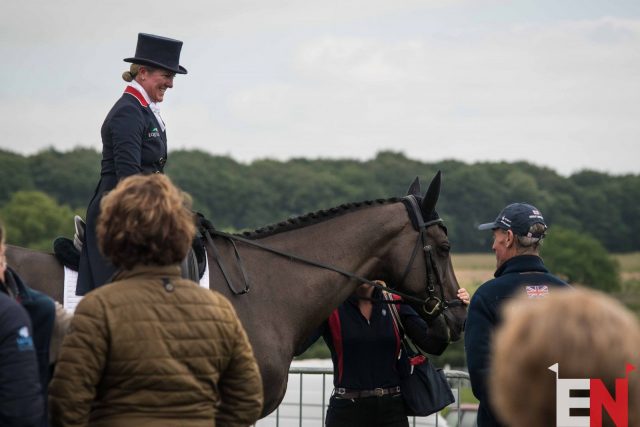 Local favourite Nicola Wilson and her European bronze medallist Bulana remain in third place on 25 going forward into tomorrow’s competition. Now twelve, the striking mare missed out on the win in her CCI4* debut at Luhmuehlen last year by just over half a penalty point, before finishing best of the British, and part of the gold medal-winning team at Strzegom later in the season. Bramham will serve as the final prep for another attempt at the Luhmuehlen title later this month.

Far from being an afterthought to the CCI3*, the CIC3* is well-stocked with top names and top horses, including four-star winners and longtime contenders. Fernhill Pimms, rerouting from Badminton, is one such horse, and further down in the top ten, the French contingent bring forward 2017 Pau winners Gwendolen Fer and Romantic Love (7th) and Thibaut Vallette and Qing du Briot ENE HN (9th). The section will move forward to showjumping tomorrow, before tackling Ian Stark‘s testing track on Sunday.

The top ten after dressage in Bramham’s CIC3* section.

Bramham is roundly named the toughest three-star in the world, with its unforgiving undulations and difficult questions testing competitors from the beginning through to the very end of the long course. To take a closer look at the CCI3* track, check out the preview here. Now, imagine coming across them on the steep inclines and declines of the Yorkshire hills and dales, with maximum dimensions as far as the eye can see, and course designer Ian Stark‘s devilishly clever eye for light-to-dark-to-light-again questions, and you’ll be getting close to seeing what life is like at Bramham. It’s not playtime here, kids – Bramham really does mean business, and the 5927m, 10:24 minute CCI3* course will test every skill our riders and horses have. You can follow along at home, too – BETV will be livestreaming the entirety of tomorrow’s cross-country action.

We’ll be bringing you a full report from all three sections tomorrow, but in the meantime, we’ll be dusting off our hiking boots and planning a trek to the top of the highest hill, EN flag held aloft. See you on the other side, intrepid explorers.