The $1 Horse Club is EN’s newest series. Do you know of a horse that was sold for $1 and went on to achieve greatness in eventing? From serious upper-level horses to first-time eventing horses and young rider dream-makers to perfectly behaved lower-level packers, we want to tell their stories. Tip me at [email protected]. 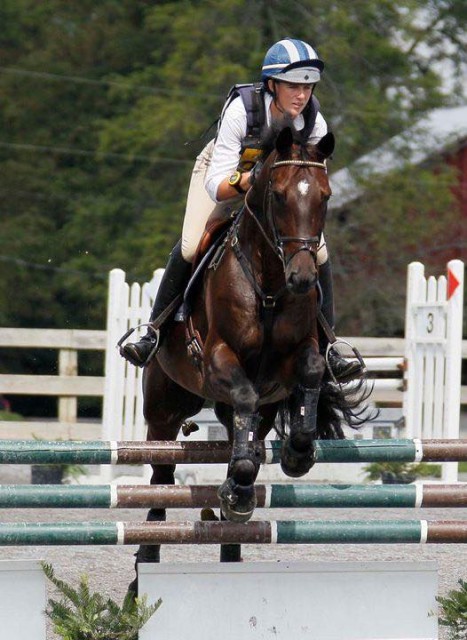 No matter how much success she enjoys, even 2014 USEA Leading Lady Rider Lauren Kieffer is not immune to the lure of the $1 horse. In 2011, Lauren had a few upper-level horses, but was mostly focusing on bringing her crew of talented young horses along. She wasn’t technically in the market for a new horse of her own, but the fun and the challenge of an Oldenburg gelding named Ron Reagan piqued her interest.

That spring, Michael Ziebarth was taking lessons on Ron with Karen O’Connor and not having much luck of staying in the saddle at the Novice level. Even though the gelding stood at 16.2 hands, he had the brain of a mischievous pony and was fond of spinning his rider into the dirt and stopping at fences unless the distance was perfect. The partnership had made it through six Novice events, but they just weren’t clicking.

One day, Karen walked into the barn and informed Lauren that she was the proud new owner of the naughty gelding. Surprised and intrigued, Lauren found to her delight that she instantly got along with Ron. “He’s a cheeky guy, but he’s incredibly smart, and his misbehavior wasn’t mean spirited,” Lauren said. “He just thought it was funny! He’s like a pony.”

Lauren and Ron began competing in the summer of 2011, winning their first few runs at Novice and Training level, and quickly moved up to Preliminary. With dressage scores in the low 30s and clean jumping rounds in both phases, they enjoyed great success together. In November 2011, Lauren and Ron won the Ocala Training Three-Day Event on their dressage score of 28.4. 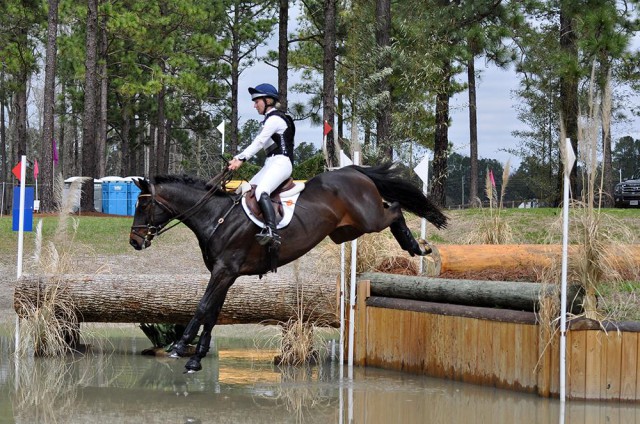 Jess Brumfield and Ron Reagan jump into the water at Carolina International this spring. Photo by Leslie Threlkeld.

Ron didn’t experience any major training obstacles on his way to competitive glory, aside from the occasional pony moment. His only issue is that he does not, to this day, tolerate a bad distance, which does not make him amateur friendly. However, Lauren has learned to appreciate this characteristic, as it allows her and other riders to practice their accuracy to fences.

In 2012, Ron placed third in the Ocala CCI* and finished his summer season by moving up to the Intermediate level at Millbrook, finishing with a clear cross country trip with time penalties added. The following year, Lauren made the decision to hand the reins over to her assistant rider, Jess Brumfield. It was time that Ron used his talents to teach another rider about accuracy to fences!

Jess and Ron started their partnership at the Novice level in the fall of 2013, but within two months had moved back up to the Preliminary level. Since then, they have completed 13 Preliminary competitions and two CIC* events, most recently finishing third at the Stuart CIC*.

Ron’s previous owner, Michael, is not sore about Lauren’s success, but quite the opposite. He is delighted to find that Ron has found a great home and keeps in touch constantly with Lauren and Jess. “He has a home forever with me,” Lauren said. “He’s such a character to have around and a really fun horse to ride. We nicknamed him the ‘One Dollar Wonder’!”

“I genuinely believe every horse is capable of being very successful in some way or another and being able to find their niche is always very gratifying. Not every horse is an amateur horse, and not every horse is a world-beater, but they can all have a job they’re good at. Sometimes it just takes some trial and error to figure it out.”