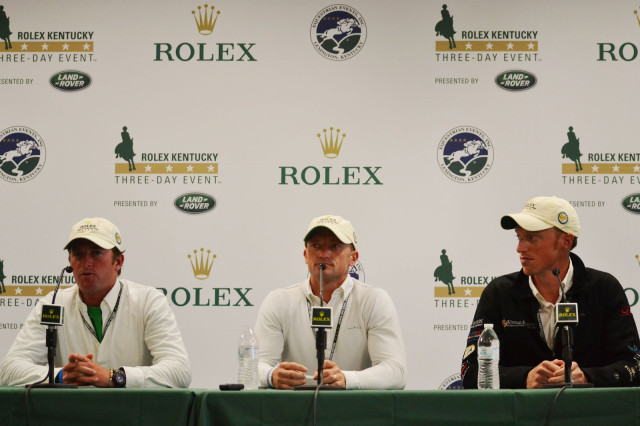 If you could put a microphone and a live audience in front of any three guys at Rolex, this trio — Michael Pollard, Will Faudree and Doug Payne, sitting in 1st-3rd respectively — would rank among the most entertaining. After a few moments of obligatory thanking owners/sponsors and beating themselves up over less-than-perfect lead changes, things got real.

Here’s a sampling of the rider banter that had the journalists in the room LOLing:

On why Mensa’s dressage is in top form:

Michael: I have Nathalie at home telling me it’s bad all the time so that helps. She keeps it very honest — if you don’t want her opinion, don’t ask. I think Nat and I have worked very well together and we do a lot of video and stuff. [Will mutters under his breath, “We don’t want to hear about the videos you make together,” to which Michael responds, “Jealous!”]

On the last thing they did before they went in the ring:

Michael: Panicked. Had a good panic and then went in the ring.

Will: Dropped my whip… He’s typically a very lazy horse and he always knows when the whip is dropped so I try to do it at the last second possible. He is quite unaffected by the atmosphere and unaffected by his surroundings — I have to flail around on him like a pony clubber to keep him going.

On their strategy for cross-country:

Michael: To jump them all in order without having a stop…

Will: …and real fast.

On the advantages of going cross-country early in the morning:

Will: I’ll be really glad that I can go have mimosas with Doug at about 11:45.

On Michael’s opinion of this year’s course:

Michael: When you come to a four-star you hear people say, oh it’s harder, or it’s a little bit softer this year, but they always look big to me.

Doug: Doesn’t everything look big to you?

It was probably a good thing the moderator cut the riders off when they did because the conversation was deteriorating with each passing moment.

In all seriousness, though, it was great to see Michael enjoying such a happy afternoon. On the way to Lexington I was listening to an interview with him on the Eventing Radio Show and he was talking about how he really just wanted to do right by Mensa this weekend. Michael explained that the horse, now 16 years old, is in the twilight of his career and deserves to have a good four-star result in his crown. They pair is off to a cracking start, currently sitting atop the leaderboard on a score of 49.5.

“Thursday, well the dressage day in general, you certainly can’t win it but you can lose it and I just wanted to have a good start, so I think that we managed that today,” he explained. “I’m sure that tomorrow there will be some great combinations and I’m probably not likely to stay in the lead but at least I think it’s a competitive start. That’s really what I wanted and hopefully we’ll continue from here.”

Asked about the cross-country Michael responded, “It’s a four-star so it’s going to be hard for everyone, but I’m riding a very good horse and I feel good about our preparations so it’s just a matter of treating it like any other event and doing my best.”

Will is hot on Michael’s trail with a score of 49.8 and Doug rounds out the top three on a 51.2. It will be Doug’s last press conference of the weekend, unfortunately; he’ll be bowing out after the dressage in favor of the Saumur CCI3* in France next month for which he received a Land Rover competition grant. Nonetheless, Doug was glad to get Tali out in a ring with some atmosphere. “He’ll be better for today’s competition,” he said.