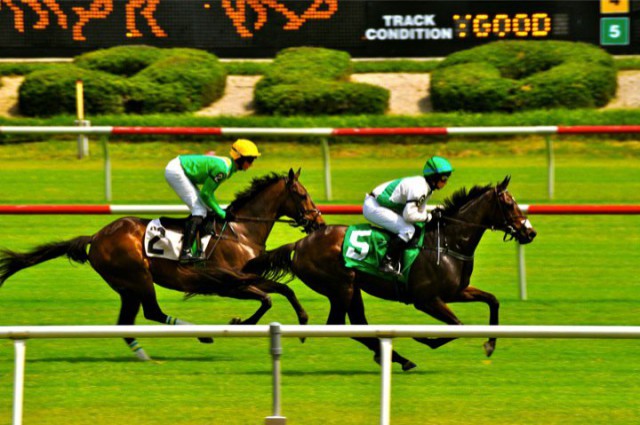 In honor of Kentucky Derby Day, I thought we would take some time to look at the extraordinary animal that gives us goosebumps in more than a few ways: the Thoroughbred. Widely regarded as one of the best sport horse breeds in the world, and certainly valued in Eventing, the Thoroughbred is unique in it’s ability to run efficiently and effectively. This is, in no small part, due to the selective breeding process that comes from the racing industry that has existed for hundreds of years, and is why we have such great gallopers today.

So how in the world does an animal the size of a cow run at speeds of up to 45 miles per hour? First off, this horse is full of slow twitch muscles, which are incredibly efficient at using oxygen to generate fuel (or ATP) for continuous, extended muscle contractions over a long period of time. The Thoroughbred has almost twice as many slow twitch muscles as your average sprinting horse, such as a Quarter Horse, meaning they can accelerate even in the homestretch, and even at the end of a CCI4* course.

What about those little stick legs that propel them at such high speeds? We all know what an extended leg looks like during peak galloping position, and at some times it can look like the fetlock is almost touching the ground. Tendons on a horse are twenty to thirty times stronger than steel string, meaning it can compress and expand to store energy and use it to propel the horse forward with astonishing strength. Unfortunately, the Thoroughbred limb, which is the secret to it’s success, is also often the reason for it’s downfall due to our breeding selection that focuses solely on speed and not as much on longevity or physical durability.

Just like any super athlete, the horse has to have the capability to deliver as much oxygen to it’s muscles as possible, and they are perfectly designed to do just that. Horses have eighteen ribs (as opposed to the human twelve) which gives them an enormous chest cavity to host their equally huge set of lungs. How big are the lungs, you say? Look at your horse, and measure from about the front of his chest just about to his hip bone. Horse lung capacity is roughly 55 liters (14 gallons), and at a gallop they fill their lungs approximately 140 times per minute. To put that in perspective, in order to run a two mile race like the Ascot Gold Cup, those horses will breath approximately 10,000 liters of air in those scarce two minutes, which is as much air as we humans breath in an entire day.

Even better, when a horse is galloping, each intake of breath is synchronized with each stride, hence why we prefer horses that have big strides and cover the ground easier, as they are also easier on their own respiratory systems. The muscles that control the breathing and the muscles that control the swing of the legs work together, using it’s own motion to draw oxygen in and expel it back out.

Kentucky Horseware created the video below, which is probably one of the most fascinating things I’ve seen all year, but I will warn you that it’s kinda gross, and involves peeling apart an entire horse. If you’ve got a strong stomach, it’s probably the most educational video you’ll see for a long time.