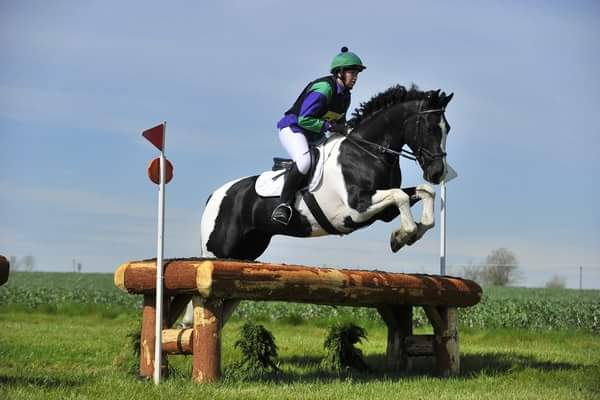 Barefoot hoofcare is on the increase and the question of its feasibility for sport horses is a hotly-contested subject amongst hoof care professionals. Lisa Dakin, a grassroots eventer based in the UK, along with Lucy Nicholas, author of ‘The Barefoot Horse: An Introductory Guide to Barefoot and Booting,” kindly took the time to share their thoughts with EN.

Lucy says that when assessing candidates for a barefoot program, a variety of factors must be taken into account. “Some horses will be harder to maintain in a barefoot regime that others, depending on their background. Every horse must be treated as an individual.”

Lisa is currently contesting BE90 — the British equivalent of Novice level — with her 10-year-old piebald cob, Mr. Harry Patch. She had her horse’s shoes removed in the summer of 2012 and hasn’t looked back since.

Being in an area with an abundance of off-road hacking, Lisa didn’t see a need for shoes and discussed the option with her farrier. “I did a lot of research into the benefits of barefoot, and how best to feed my horse, and decided it was something I wanted to try,” she says. “By the time I decided I wanted to do more with Harry and event, he was well-established barefoot, so I didn’t see any pressing need to change that.”

Lisa and Harry tackled their first BE80 events in 2015, finishing second at Norton Disney H.T. and third at Horseheath H.T. the following year, then successfully moved up to BE90. 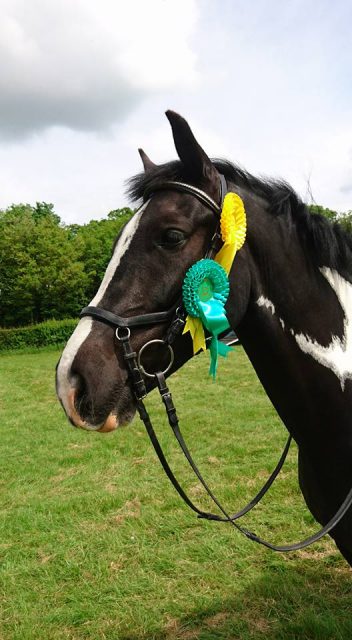 Lisa explains that, in her experience, the benefits of going barefoot have been tangible. Barefoot advocates talk about improved equine proprioception on grass, when barefooted — e.g. the horse taking more “responsibility” as they can better “feel” the ground — and agrees, saying that it does seem that Harry is better able to read the ground ahead of him.

On the same note, being barefoot has made him more sensitive to different types of going, she says, so footing must always be taken into account.

“He is noticeably different to ride, depending on the ground,” Lisa says. “If it’s heavy or soft he doesn’t like it, so I don’t compete on severely cut up or very soft ground any more.”

The worst footing: “The worst ground for him is hard ground with no grass cover. His stride length shortens and he’s more inconsistent.”

She adds that the supposed issue of a lack of traction when jumping and riding fast with a barefoot horse is a common misconception. “On soft going, a bare hoof will actually cut into the ground to give extremely good purchase.”

Lisa says slipping when jumping is rarely a problem for her and Harry. “We don’t suffer from problems with slipping, whether going cross country or show jumping on grass. We are still very much in contention against the faster, little nippy ponies!”

She has, on the other hand, run into some issues with slipping in dressage arenas when the grass is cut very short and the ground is hard. “In such cases, I do end up riding a ‘safe’ test and potentially losing marks.”

The use of hoof boots could remedy this but they are not permitted in the dressage phase of horse trials — although there has been some movement in recent years to amend this rule.

Lisa is wary of the preconception that studs and shoes are preferable to barefoot.

“I’ve been told frequently that I can’t be competitive without studs,” Lisa says. “It’s frustrating because I am already out there being competitive! It’s a rare occasion that we come home without a rosette.”

“I’m not a fan of studs, and I have concerns about the potential for long-term damage to the structures of the equine leg. My horse has good, clean legs, and although not perfect conformationally, he is always sound and is out virtually every weekend competing on grass without studs.”

When asked if being barefoot affected their step up from BE80 to BE90, Lisa says she has always judged her cross country turns and lines carefully, which has made her ride correctly. “As we’ve progressed and gone to higher levels, we’ve both become more balanced, and able to take the shorter lines,” she says.

Lisa intends to continue Harry’s training sans shoes, as he continues progressing up the levels.

“We jump-school at home on a surface over 1.2m, and I’d hope we can replicate that on grass at some stage. So long as we remain balanced, I don’t see height as being an issue,” she says. “I do a lot of hacking as part of Harry’s fitness regime, and that includes galloping over varying terrain. I believe in making sure he’s able to adjust himself to the ground conditions, and is not constantly working on artificial surfaces.”

“It’s not the fences themselves that would make me adjust my riding; if I wasn’t confident we could clear them, we wouldn’t be tackling them. It’s the approach and the conditions that are more important, in my mind. I would always plan the safest approach to a fence; Harry has other ideas at times, but I always know that if I point him at it, he’ll try his best.”

We wish Lisa all the best for her 2017 season with Harry!

For more on the subject of barefoot eventing, check out “Eventing Barefoot: Is It Possible?” by Chesna Klimek.