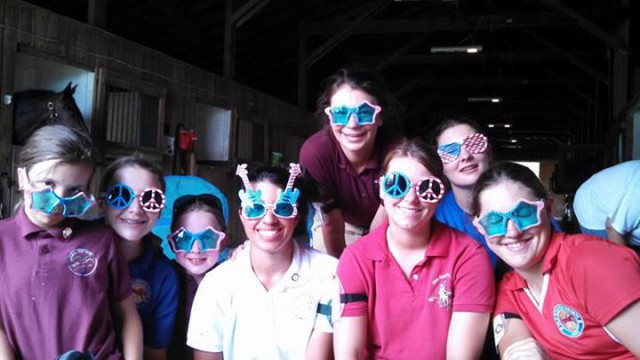 If you were at the United States Eventing Association’s annual meeting last December, and you attended the “town hall” meeting on the future of eventing — which, admittedly, most of you neither were nor did — you’ve heard me brag about my Pony Clubbers before.

That’s because 1) somehow the town hall meeting, which began with the question “how do we attract more people to the fabulous sport of eventing?” quickly devolved into a rant about “kids these days,” specifically singling out Pony Clubbers as entitled brats on super-expensive horses with declining horsemanships skills — a rant which continued for so long that it began to annoy me until I produced a small rant of my own, and 2) my kids are the bomb.

Pony Club, for you non-horse people, is like 4H, only just about riding. It’s international and, despite the name, welcomes horses as well as ponies. It’s a lovely organization that makes a team sport out of an individual one; it requires children to take care of their mounts as well as ride them, and it physically bans parents from the barn.

I’ve never been a Pony Clubber — I started riding too late — but I became a fan way back when I was covering hunter/jumper shows for equine magazines and saw an 8-year-old hop off one of her many show ponies just outside the ring, hand the reins to a groom and tell me blithely that she’d never been to school because they just went to horse shows year around, and also she didn’t bother with the equitation classes because she didn’t know her diagonals. She was a nice kid; it wasn’t her fault. But I was at the time pregnant with my first child, and I thought, my kid will never, ever think riding is like this.

Anyway — as usual, I digress — out here in east Tennessee, we mostly don’t ride expensive horses. We mostly don’t have high-level instructors or lots of people vying for spots on Young Rider teams, and we sure as heck don’t have grooms. What we have — oh, thank God for this — is each other. That’s what I said at the USEA convention, sort of. I said that my kids were fabulous and that kids like them were the future of eventing, and as a result my kids got to go work Rolex dressage, which they did in droves, with enthusiasm. It was the first time most of them had been to Rolex, the first time they’d seen all that horses could be.

Which brings me to our beloved Pony Club camp.

Not very many years ago, we almost lost our club over a fight between grown-ups who should have known better. I was thankfully away when it happened, and trust me, I never asked, but when the dust cleared, we had six members, none rated higher than D-3. They didn’t always get along.

I wasn’t DC then, but I took over our summer camp, moved it to my barn, and made it free to members and not open to anyone else. By the end of three days, the members were a club again, and from that point, it’s been gravy.

We have 17 members now, ranging from our three newly minted D-2s to four C-2s (two of which are taking their HB in August) and two HBs (one of which is taking her HA next week). Fourteen of them came to camp last week; 13 slept in my basement. I keep waiting for this camp thing to backfire. I keep thinking that at some point the combination of teenage girls and no sleep is going to manifest itself in the biggest eruption of drama ever, but it simply doesn’t happen.

I’ve quit allocating an hour for morning chores because these kids get themselves up early, get themselves to the barn and get everything done. In half an hour, the ponies are fed, watered and groomed; the stalls are clean and the aisles swept; and all I’ve done is put the milk back into the fridge, braid the littlest one’s hair and drunk coffee.

This year, because our members are advancing so well, we hired a fancy instructor for the first time: the indomitable Cathy Wieschhoff. If you want intelligent teaching, compassion and ass-kickin’ where ass-kickin’ is required, Cathy’s your woman. I loved her to pieces before camp. Now my whole club loves her to pieces too. Cathy was awesome, but she wasn’t the point.

This camp makes us. It’s come to define us. It gives us our sense of being a club. By the end of the first day, the new members are grabbing the brooms to sweep the aisle, reminding each other to keep stall doors closed, holding horses for one another, because that’s what you do. They’re tucking in their polo shirts and wearing belts with their britches, and tying their hair out of the way, because that’s what you do. Not once in four years have I had to scold a member for not trying or not helping or not taking care of her pony. Not once have I had to raise my voice in any way.

The best part is Tuesday night. Wednesday we hold ratings examinations, and, while they are individual tests, the honor of the club comes into play. Not everyone rates, but everyone prepares. A C-2 takes the three D-2 candidates aside and carefully goes over the horse management they need to know. Two older girls slip back to the barn “to do nights, and show Sydnie the Pony Club way of putting on a blanket.” When the small girls go to bed — sent there forcibly by the older ones — the older ones look over their tack. One of the littles has forgotten to clean her boots. When she wakes up, she’ll find them cleaned and polished to a beautiful shine.

We’re sending four kids to Nationals this July. We’ll be out in force at our eventing rally in the fall. We’ll work Rolex again next year. These children are the future of our sport — them, and children like them, all over the world.