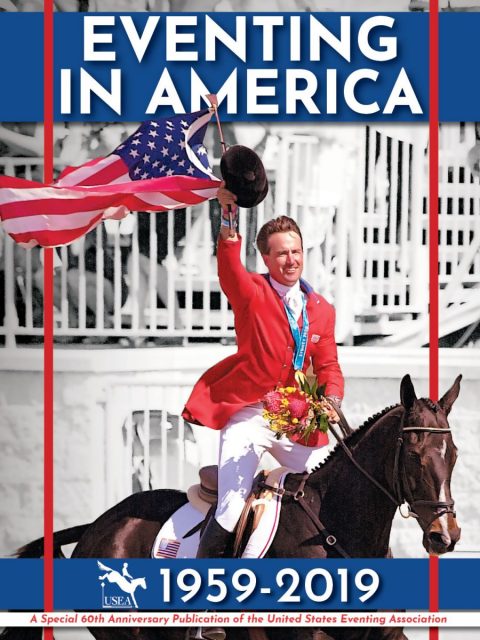 The USEA celebrated its 60th anniversary at the 2019 USEA Annual Meeting & Convention, and all of the attendees took home a special USEA Publication – Eventing In America. This is the second edition of Eventing in America with the first being published in 1999 to commemorate 40 years. Now, 20 years later, the USEA has once again taken a look back at its history and the memories of six decades of the sport and produced a publication that takes the readers year-by-year.

A few copies of Eventing in America are now available for purchase – the perfect opportunity to preserve the history of the sport in the U.S. The publication costs $10 and is available to purchase here through www.ShopUSEA.com.

Eventing in America features a page from every year of the USEA’s existence from 1959 to 2019 including all of the U.S. teams at the Olympics, World Equestrian Games, and Pan American Games as well as all of the USEA leaderboard and special award winners. The book starts in the 1920s with cavalry photos and text from some of the USEA’s founding fathers, Alexander MacKay-Smith, Major General Jonathan R. Burton, and Denny Emerson. Each decade is opened up with stories of the period – giving a taste of how the sport evolved over the years from the cavalry to the formation of the USCTA (now USEA) to the golden era under Jack Le Goff to the new millennium and the present day.

From “The Founding of the USEA” by Denny Emerson

Alexander Mackay-Smith realized that there was a need for some sort of Association between Pony Club for youngsters and the USET for international riders if eventing were ever to get established in the United States.

“Accordingly, I sent a letter to everyone I knew interested in eventing to come to a meeting during the Pan American Games in Chicago in September of 1959. About 25 people came to the meeting. We founded the USCTA and elected officers pro-term, with Philip Hofmann as president,” said Mackay-Smith. . . . Even though six decades have passed since that meeting in Illinois, many of the ‘pioneers’ from that day are still active as leaders and innovators in American horse sports. I would hope that they feel gratified that the little Association which they had the vision to create has grown into such a respected and significant leader in the American horse community. The USEA is synonymous with good sportsmanship, good riding, and an emphasis above all else on a respect for the well-being of the horse. That’s quite a legacy. 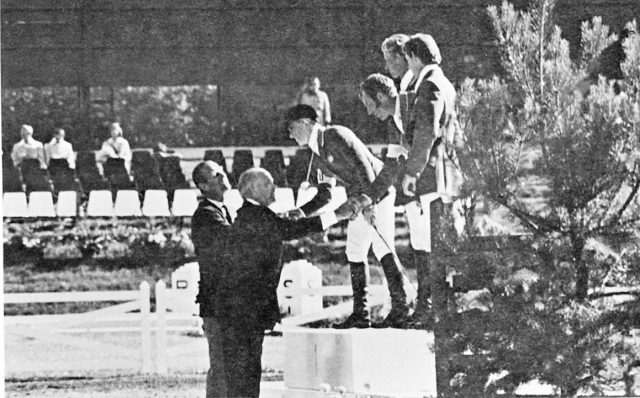 From “The Golden Era of Eventing”

For the U.S. Eventing Team, the 1970s was a decade of medals. At every single major championship, the U.S. brought home a podium placing. According to Alexander Mackay-Smith, this success is due to Neil Ayer and Jack Le Goff who both came to the forefront of eventing in the U.S. around 1970. Mackay-Smith said, “They were to influence eventing in North America as no others had before.” . . . In 1973 the first FEI event was held in the U.S. at Ayer’s Ledyard Farm in Massachusetts. Ayer was both the organizer and course designer and invited riders from all over the world to come compete. The inaugural event was won by Britain’s Sue Hatherly and Harley, but the U.S. would have their redemption the following year on British home turf when the 1974 World Championships were held at Burghley. The U.S. won the team gold medal by a huge margin and also claimed individual gold and silver. With their wins, the U.S. also won the rights to host the next World Championships, but a location was needed.

From “A New Millenium”

2000! A new millennium dawned and the USCTA, soon to be the United States Eventing Association (USEA), was ready to face whatever the next decade would bring. The impact of this new technology called the internet, changes to the very nature of the sport, improving safety for horses and riders were all challenges to be met… On the home front, the Association was preparing for a name change. In the mid 1990s the USCTA had adopted the name Eventing USA for the magazine replacing the old USCTA News. Was this prophetic? Farsighted? Maybe. The FEI decreed at the end of century that the name of the sport internationally would be eventing, not “horse trials” or “combined training” or “military” but eventing! In 2000, the work began to legally transition the U.S. Combined Training Association to the U.S. Eventing Association. The USEA was re-branded and was launched with a new name, decal, and logo wear at a grand party at the 2001 Annual Meeting & Convention in Portland, Oregon.

Want a sneak peek inside of the book before purchasing? Current USEA members are able to read Eventing in America by logging into https://services.useventing.com/ and navigating to the Eventing USA Archive.