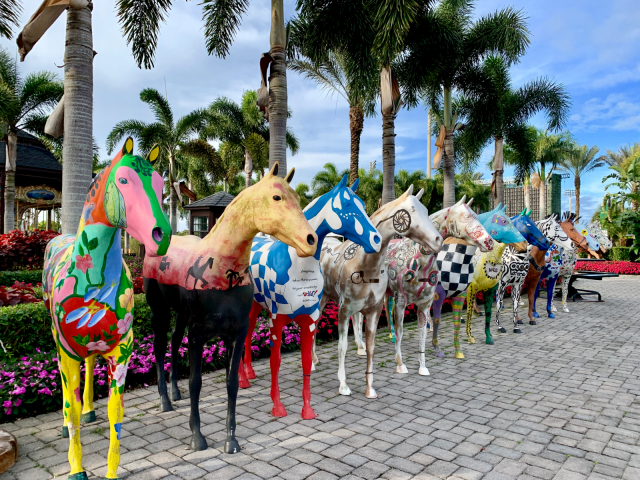 Being in Wellington is like being inside a crayon box. A very fancy, expensive crayon box, mind you, with not just primary colors but also all the exotic ones in between: “Cerulean,” “Salmon,” “Dandelion,” “Granny Smith Apple Green.” Some of the crayons are the glitter kind — this zip code must have the world’s highest concentration of swarovski crystal per capita. It’s something to aspire to, I suppose.

This weekend’s $50,000 MARS Eventing Showcase is my maiden Wellington voyage, and I spent the first chunk of it just wandering about with googly eyes, drooling like a teething baby over six-figure horses, wishing I’d invested in bitcoin. Also, I was lost. 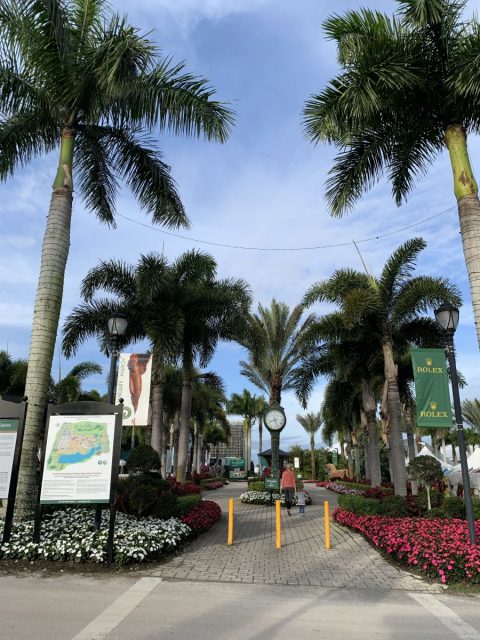 The map of WEF that I walked straight past at the entrance. Photo by Leslie Wylie.

Palm Beach International Equestrian Center (PBIEC) is actually two horse shows down the street from one another — the Winter Equestrian Festival (WEF), which is the hunter/jumper folks, and the Adequan® Global Dressage Festival (AGDF), which is the dressage folks but also there’s a Derby field and a polo field and this week they’re hosting the Eventing Showcase but mostly I think it’s just dressage. Don’t quote me on that.

The international arena at WEF. Photo by Leslie Wylie.

The derby field at AGDF all dolled up for Showcase cross country and show jumping. Photo by Leslie Wylie.

Anyway, I was staggering around WEF picking up my jaw on occasion to ask people where the dressage ring was. It’s somewhere, everyone seemed to agree. We heard something about an eventing thing going on. 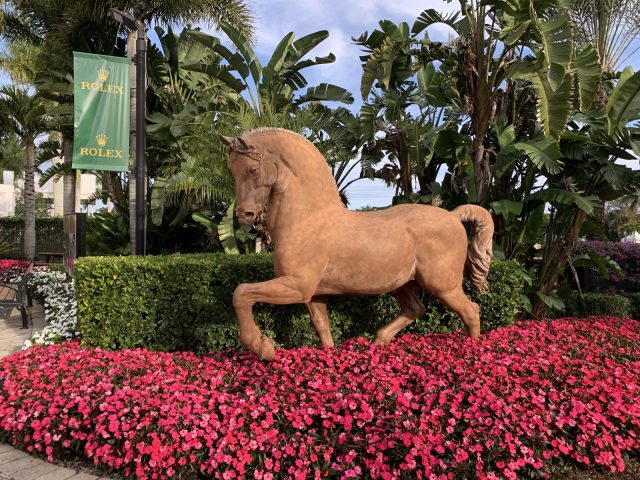 So many horse statues, so few h/j people who care about eventing dressage. Photo by Leslie Wylie. 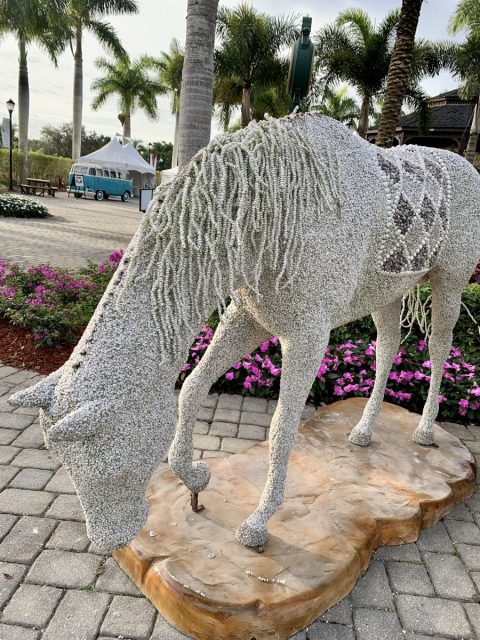 This one is made of seashells. Photo by Leslie Wylie. 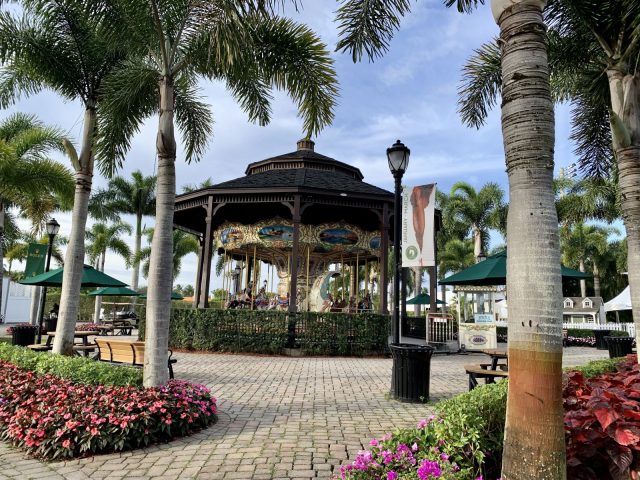 The painted ponies go up and down. Photo by Leslie Wylie. 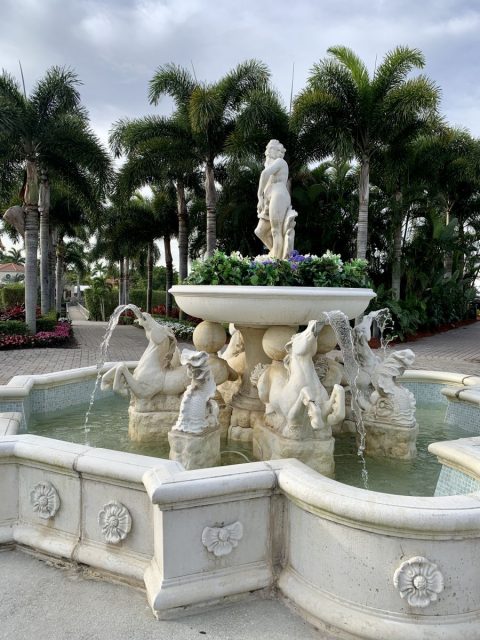 Sufficient, but would be more on-brand if it was champagne. Photo by Leslie Wylie.

It took me a solid 45 minutes to deduce that I was at the entirely wrong horse show, but by that point I didn’t even care. Nevermind that I was might miss a test or two. I was in the zone.

I wandered around this palm tree-ed equestrian paradise some more, loitering about at the hunter rings, cooing at the ponies … 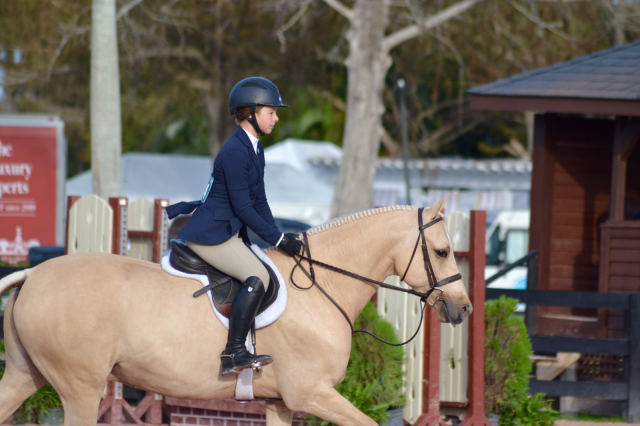 WEF ponies are robot-esque when it comes to lead changes, like there’s a certain button-braid the riders push to activate the swap. Photo by Leslie Wylie.

… casually turning over price tags in vendor booths. Sharp intake of air. “Can I help you?,” the salesperson would inquire. “Nah, just looking,” I’d mutter while backing toward the exit. 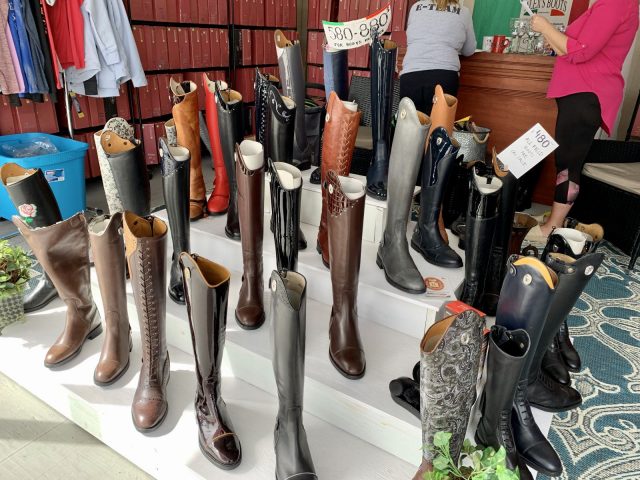 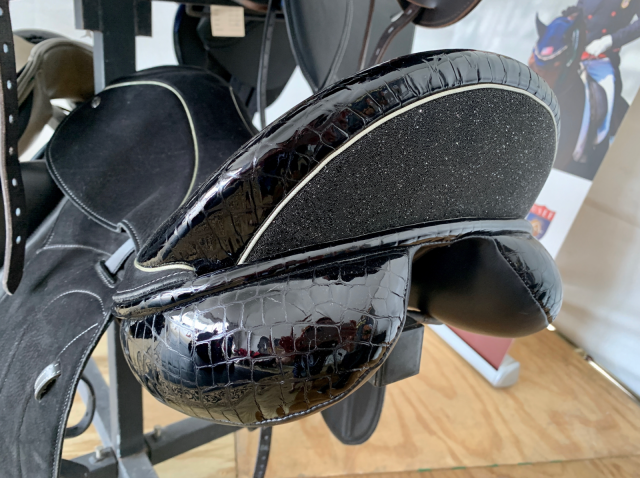 I am here for this patent leather/sparkle detail. Photo by Leslie Wylie. 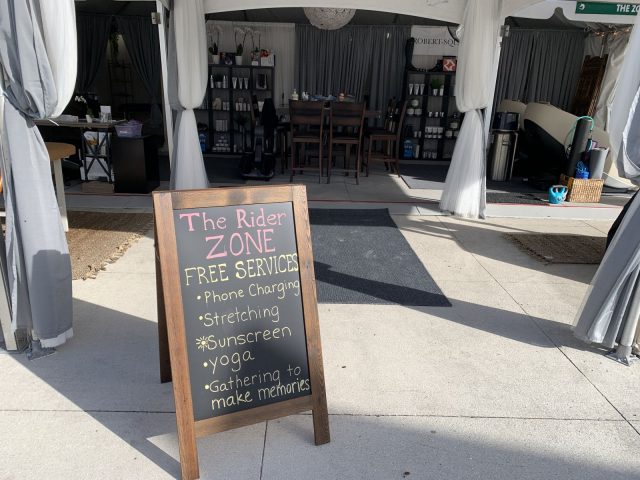 I did eventually make it to AGDF and found my eventer brethren huddled together in the indoor arena, where Showcase dressage was just underway. I think I’ve never been so happy to see them. I had begun feeling a bit disoriented, like my pupils were dilated or something. Staring straight into the sun of too many bright, shiny things can have that effect. I found comfort in these familiar faces; with every botched lead change, I found myself sighing in relief. I’d gone to the other side and it was good to be home.

Stay tuned for all the latest from Welly World!