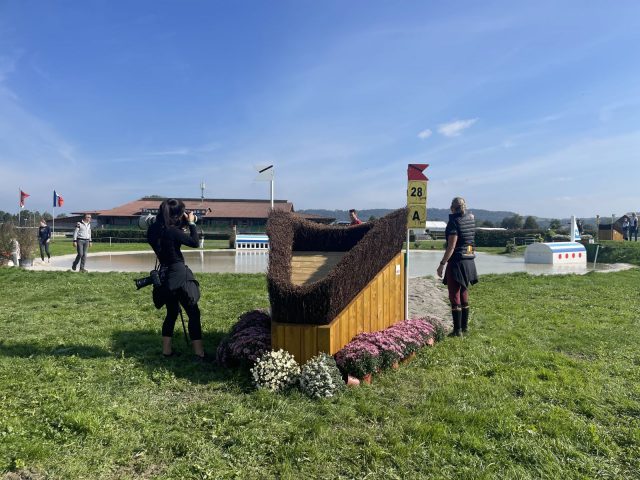 Nothing on course is small, as demonstrated by photographer Libby Law.

Today’s the day, folks — after two jam-packed days of smoking hot dressage, which sees a whopping 28 of our 67 competitors in the sub-30 zone, we’re finally onto cross-country. And what a day it’s going to be: course designer Mike Etherington-Smith has whipped up a serious championship track in just a matter of weeks, after designing the 2019 Europeans track in Luhmühlen with great success. Our competitors, who represent 17 nations and field 13 teams among them, will tackle 32 questions across 5768 meters, aiming for an optimum time of 10:07 that’ll likely prove incredibly tricky to get.

That’s because the Avenches track, which winds its way through the racecourse, is incredibly twisty, which means that from the moment riders leave the startbox, they’ll need to take every possible opportunity to get up on the clock and try to jump out of a rhythm. If they want to beat the clock — and they’ll need to do their best, if they want to stay in a competitive position — they’ll have to go direct at all the tough combinations, some of which have been described as five-star questions. Of course, not every competitor here is fighting for gold, and for less experienced horses and riders, or those who’ve run into trouble out on course, Mike has provided a number of slow alternative routes to ensure that an educational, positive experience is within the grasp of every horse and rider. 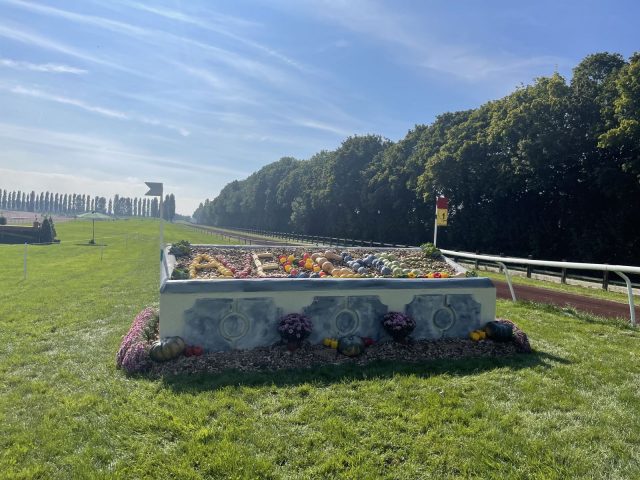 The first fence demands respect — and that sets the tone for the course to come.

They’ll have to be on the ball right from the get-go, mind you. The first fence is a straightforward table with a slanted face, but it’s big and wide, and fence two, a colossal hedge with rails on the take-off side, is enormous both in height and width. By number four, competitors will reach the first combination on course, and it’s a serious one: they’ll tackle a coffin complex with a a clipped upright rail, a wide ditch, and an angled hedge as the C element. 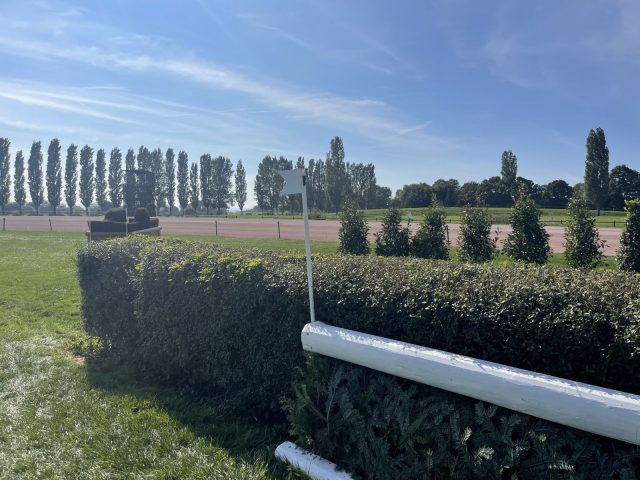 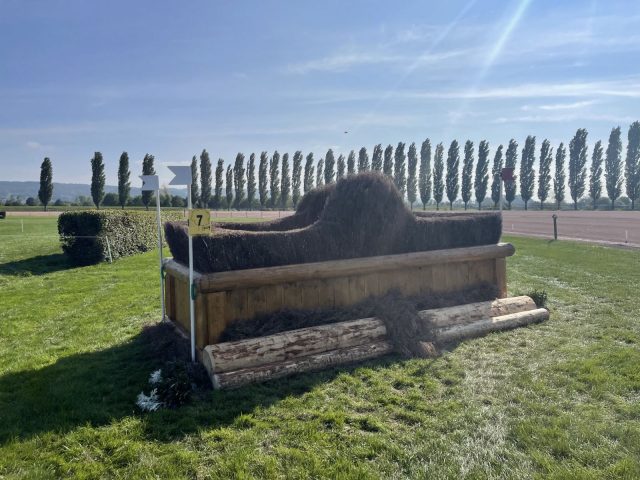 Fence 7 can be tackle on the left as a spread, or the right as a corner.

Fences 6 to 7 will also provide an interesting challenge and an early indication of whether a rider is aiming for the time. The two fences — another wide hedge to a brush topped oxer, which can also read as a corner, can be tackled one of two ways: they can angle the hedge at six and go direct to the oxer option at seven, or they can jump the hedge straight on and ride a 90-degree turn around a line of trees to tackle seven as a corner. This early on, horses will be feeling fit and fresh, so this will be an influential question and riders will need to ensure their horses are focused and rideable at this stage. 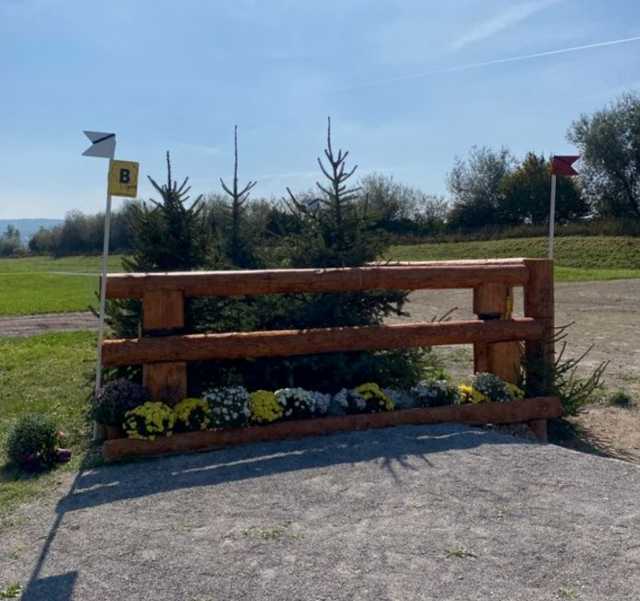 The ‘Crazy Corner’ with its defined line at 9B. Photo by Lola Enée.

There’s no real let-up point on this course, because even when riders are tackling single fences, they’re ordinarily doing so while navigating a turn or a mound, so focus will be keep from start to finish. Some of those questions demand accuracy, such as 9AB, which features a log to an open corner, with an angled step defining the take-off point — not a dissimilar ask to Badminton’s famous Vicarage Vee, though not quite as intense.

The narrow Flower Boxes, which come off a mound at 10AB, could also prove a breeding ground for drive-bys, as could the double of angled hedges at 12 and 13, which are so reminiscent of the influential angled hedges at Bicton CCI4*-L earlier this year. Woe betide the person who struggles with left-handed corners, because they’re prevalent on course — and at 16AB, Christine’s Corners, there’s two of them in a row to get through.

At 18AB, they’ll need to tackle a skinny triple brush before striding on to a huge hanging log into the water, though this is one of many spots on course where an easier option is available if needed. The next water question, which appears at 22, features an angled house on dry land before a splash through, followed by another double of angled houses. The final couple of minutes of the course are arguably the most intense, even over the single fences, and the Iena Leap at 25 will require bold riding to navigate the ditch and wall rider frightener. 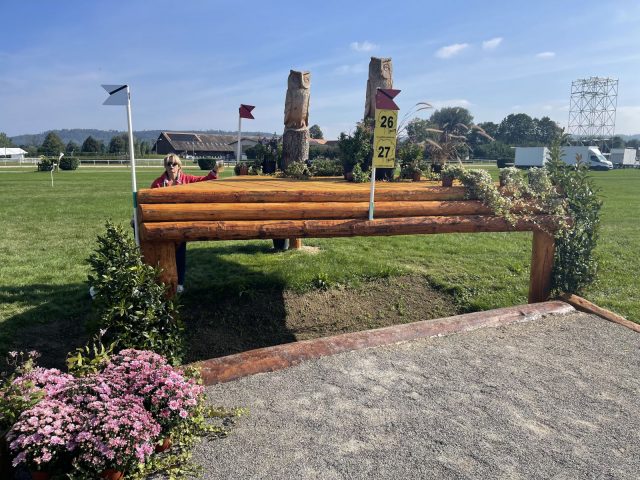 The corner over a ditch at 26 is among the most impressive fences on course.

There’s no room to breathe after that, because 26 is the most formidable looking single fence on course: this huge, solid tabled corner is situated over a ditch, and will require both accuracy and pace (and nerves of steel, we reckon). There’s a two-fence alternative for anyone who feels this is too much of an ask on a tiring horse. 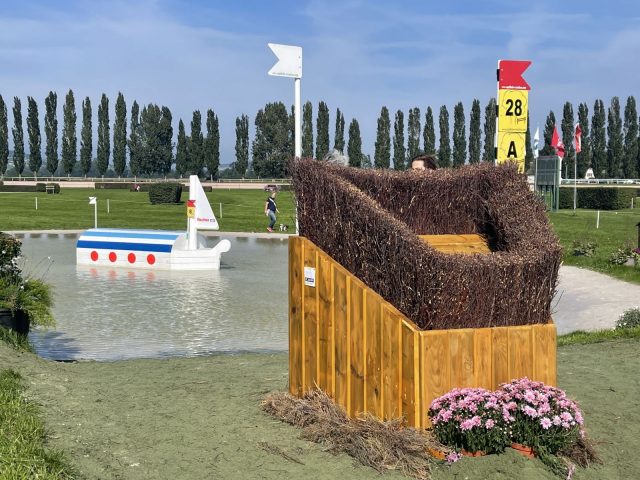 The water at 28AB opens the door for a runout late on course.

At 28AB there’s another water — this time, it’s a triple brush at A and an angled boat in the water at B, and as they loop back around to tackle another question in the same pond at 30, they’ll meet a single skinny brush heading towards home at 29, which we’re expected to produce a number of frustrating 20s as the day goes on. Finally, after jumping two huge brush-topped angled fences at 31AB, there’s one more meaty table to jump on the way home.

Here’s what some of the riders have to say:

Overnight leader Ingrid Klimke: “I think it’s a little bit like a jump-off sometimes, where you have to turn and turn. At Wiesbaden, it’s the same — it’s like seven minutes in a jump-off, and you can’t breathe very much. It’s a good thing that [SAP Hale Bob OLD] is very handy; he has a very handy canter for good turns. I hunted him when he was young, so I don’t think he’ll stumble over the different ground. I found a few places I can gallop and say, ‘it’s your turn now!’ I’m really looking forward to it.”

Belgium’s Karin Donckers: “I think it’s a proper course — a real championships course. There’s a lot to jump from the beginning to the end, and you cannot lose focus for one second. It’s big, and it’s technical, and it’s not going to be a dressage competition!”

Great Britain’s Kitty King: “It’s a very kind of different track to what you get in the UK. There are lots of twists and turns, and I think that’s going to slow us down a lot — the average cruising speed is going to be a lot slower than round the more galloping track because you’re always on a turn a little bit here. You’re definitely gonna have to keep up on your A game and just really focus; there’s plenty of questions on the course, plenty of places where you can have a silly mistake, and then also it’s just making sure you end up on the right side of the string in some places as well. So you’re going to have to stay really on the ball and really focused from fence one to the last once and I think it’s going to be quite kind of intense for the horses the whole way round. you don’t have much space where you can just gallop along and not have to be motorbiking around so yeah, it’s gonna be intense. They’ve done a great job designing and tracking the you know the facilities in the space they’ve got.”

The Netherlands’ Merel Blom: “I think it’s a big track. I think [The Quizmaster] is of course capable of it, as he did so well in Tokyo, but for me I find it a bit more difficult track than Tokyo. I’m not sure why — everyone asks me why and I’m not sure, but it feels a bit more uncomfortable for me. there’s not a specific thing I don’t like — I like really like the course; I think it’s challenging, and I think it’s a real championship course, but I do think it’s a big challenge. Once there comes a rhythm, things will happen and then things will get into a flow — but it’s always easier if you’re one of the last ones to go, as you can watch a few before.”

Germany’s Christoph Wahler: “It’s very twisty, and it’s up to height, with very, very nice fences — like the way they’re designed, it looks good. We’re going to see how it’s going to ride; I think it won’t ride very soft and easy, regarding all the turns and all the changes of directions. It will be a little bit like driving a go-kart, in that you turn all the time and then you have to accelerate from the turns and then you have to brake before the next turn. It wouldn’t ideally suit a very big horse like mine!”

Ireland’s Cathal Daniels: “I think the cross country is very well presented and there’s black flag alternatives, but I think it’ll be mentally tiring on the horses. You have a lot of turning and twisting at the start, then you go out the back and the ground does change a little bit, but then when you come home, Ithere’s a lot of jumping to do. So if you have a horse that’s getting tired three-quarters of the way around, they have to really dig deep, so horses with a big heart and big engine are going to come out on top. For sure, it’ll take a bit of riding, and it’ll take a good horse to keep answering a lot of questions. Some of the courses you ride, ehen you get three quarters of the way around, they ease off and you get them home nicely and travel home, whereas here it’s nicely presented at the start and it’s gallopy enough, and then on the way home, they need to be a clever horse but a good jumper.”

Want to take a closer look at the course to come? Check out this super preview from our friends at the CrossCountry App, with photos and videos by Lola Eneé and commentary by course designer Mike Etherington-Smith.