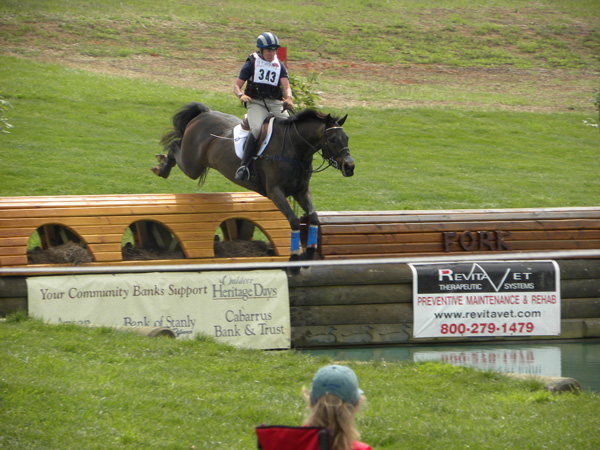 Karen and Mandiba
(1) In general the CIC3* and advanced courses rode very well, with only 13 rounds with issues (a stop or more) out of approximately 80 starters.  A lot of riders were nervous this morning, but, after the fact, everyone seems pretty pleased with how the course rode.
(2) In the CIC3*, Allison and Arthur jumped ahead of overnight co-leader Buck by adding only 1.6 time penalties, while Buck added 4 with Bobby.  Arthur looked very excited early on the course, and Allison was having to be strong to make him pay attention, but he settled down into a nice rhythm after a few fences. 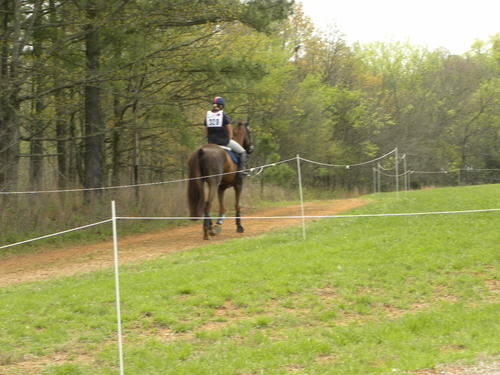 The longest walk in the World: Allison and Arthur walk to the warm-up, which, at The Fork, might just be the longest walk ever.
(3) Concerns about My Boy Bobby’s fitness were assuaged and he looked strong throughout.  The weather cooperated for Buck with partly cloudy skies and cooler temperatures than the last couple of days.  When I say “concerns,” I’m just referring to what Buck has talked about before (such as at last year’s convention) about the challenge of getting a larger horse like Bobby fit.
(4) There were three double-clears of the day: Bobby Meyerhoff and Smooth Rider, Michael Pollard and Wonderful Will, and Buck on Ballynoecastle RM, but most of the riders had good rounds with less than 10 time penalties.
(5) Phillip had 4 time penalties total on Waterfront, Woodburn, TruLuck, and Inmidair combined.  Waterfront jumped from 12 to the lead in the advanced, and the other three moved up several places each.  It looked like Phillip ran Woodburn in a snaffle, which suggests that he is listening really well with Phillip right now.  Connaught looked good, but Phillip took his time and added 19.6 time penalties, obviously saving Connaught for later competitions.  I appreciate this strategy; horse trials should be viewed as preparation for three-days at the upper levels.
(6) When it rains, it pours; most of today’s major issues were grouped together in a strange 45 minute time period during the CIC3*.  First, Mara pulled Nicki Henley up after a table approaching the second water and they decided to use the horse ambulance to take him back to the barns.  As Nicki was riding back to the barn area, Mary Bess Sigman fell at fence 7, the hobbit house and corners (pictured in my XC preview from Friday).  Her horse, Guiness X ran a few hundred meters to the first water while the event personnel charged to assist the rider and catch the horse.  Just a few moments later, Madeline collapsed on the landing after 21A (a jump also pictured in XC preview) and Holly Payne popped off into the water.  Madeline stood up but walked away visibly shaken.
So at that time, there were two major issues happening at the same time in very different places of the course.  Madeline started looking progressively better and was loaded onto the ambulance which had just returned from transporting Nicki Henley.  Guiness X waited for the same ambulance to return to fetch him while the competition resumed.  According to the announcer, Mary was up right after her fall, and Holly looked fine and was up walking seconds after her fall.  Apparently Guiness X had some lacerations that needed stitches, but no major injuries that required immediate transportation, and there’s no word yet on the status of Madeline or Nicki Henley.  With the series of incidents so tightly packed together, it seems like the competition officials, personnel, and vets handled everything quickly and thoroughly.
(7) Speaking of the announcer, Brian did an AMAZING job today, as always.  Every morning he comes on the speakers with a greeting and to set the table for the day.  During the XC, he does a super job of telling us what is happening and adding his insights without interfering with the action.  You always know what’s going on, but he’s never overbearing.  When a crisis happens, he says just enough to explain what’s happening without going overboard, and, when necessary, he converts to crowd control mode and orchestrates the catching of horses, the clearing of vehicles, etc.  Events are better with Brian in the speakers. 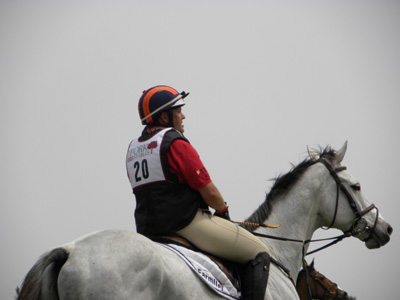 If anyone knows why Buck was rocking an orange and blue helmet cover, please leave a comment.  Update: It turns out that the answer is much more personal than I expected, and I thought about yanking the photo and related comments, but Buck chose a public gesture and I think that EN should respectfully stand by him in that gesture.  This instance confirms what we already know: that Buck is one of the nicest and classiest people in eventing.
(8) Twizzel had a runout at the sunken road, but looked strong elsewhere.  Overnight advanced leader Courageous Comet stopped at 7 (the hobbit house and corners mentioned above), and blasted around the rest of the course to only record 5 time penalties. 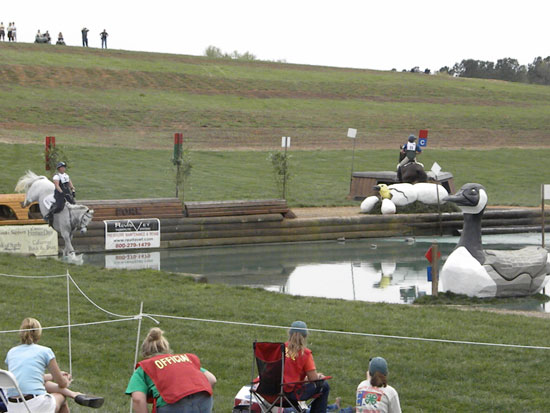 Occasionally two riders would enter the first and last water elements simultaneously, leading to some excitement.  But, to my knowledge, everyone got through ok the several times that this happened.  Becky and Peter Atkins on HJ Hampton.
(9) Karen and Mandiba took their time around the CIC3* course, but looked fantastic and jumped every corner on course without a problem.  Boyd had a similarly excellent run with Neville, meaning that both Boyd and Karen rebounded great after Southern Pines.  Boyd’s two other rides, Rock on Rose and Remington, also looked super.  Remington in particular has developed so well under Boyd over the last two years, and he looks Rolex ready for sure. 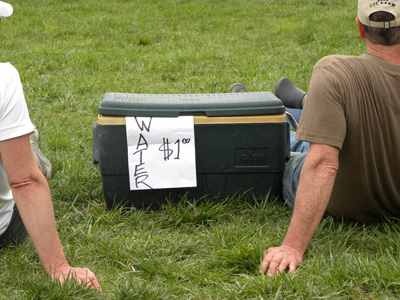