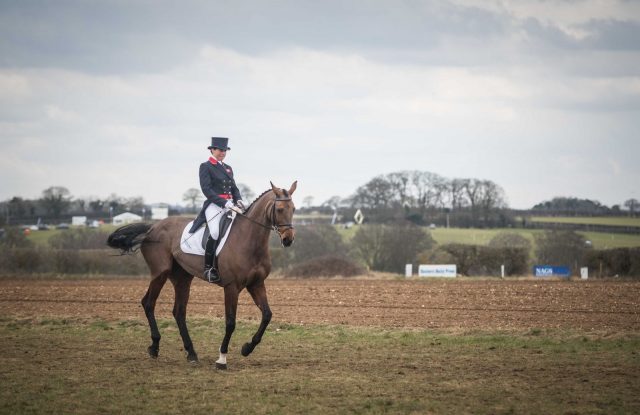 Piggy French and Vanir Kamira — runners-up at Burghley 2017 — in the CIC3* at Burnham Market. Photo by Tilly Berendt.

The first major international of the British eventing season is historically an early litmus test for those horses bound for major spring CCIs, and this year’s pathfinder, the Barefoot Retreats Burnham Market International Horse Trials, is no different. Its three CIC3* sections, as well as its Advanced and Open Intermediate classes, boast a veritable who’s-who of top-level eventing, with 54 Badminton-entered horses and riders featuring across the three days of competition.

So, too, is this early-season international an opportunity to test 2018’s new FEI dressage scoring, whereby the coefficient is removed to tighten the ranks and place a more pronounced effort on cross country performance. How does this work? Rather simply, it turns out, once you get used to a spate of 20s across a scoreboard.

Formerly, scores were calculated by splitting the difference once an ordinary dressage percentage had been calculated — so, for example, a 75% test would become a 25. Then, this figure was multiplied by 1.5 — making it, in this instance, a 37.5. Of course, the higher the original number, the more impact that 1.5 multiplier has, which meant that before the change, scores would be far more spread out across the board, which meant that for cross country to be influential, course designers would have to produce more difficult tracks, or tracks on which the time was particularly tight. 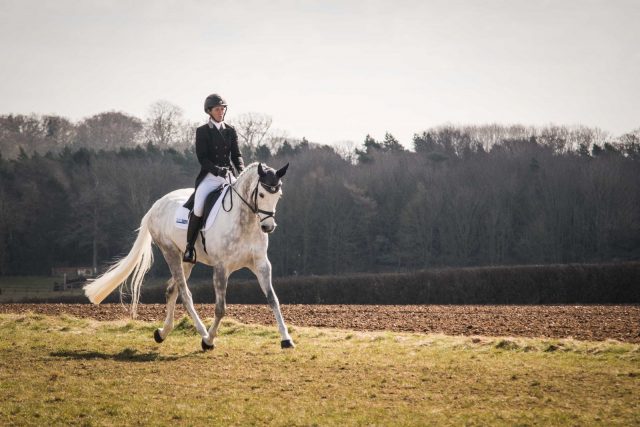 Caroline Powell and Up Up And Away. Photo by Tilly Berendt.

The new scoring system does away with the 1.5 multiplier, leaving just the inverse percentage: so, in our example, that 25 would stay as a 25. With the scores much closer together after the first phase, horses who can jump quickly and cleanly are likely to advance up the placings — and the horse who can finish on his dressage score is armed with an enviable weapon. Ahead of Badminton, one of the major stops on the long road to this autumn’s World Equestrian Games, the effect of this influence is well worth studying. 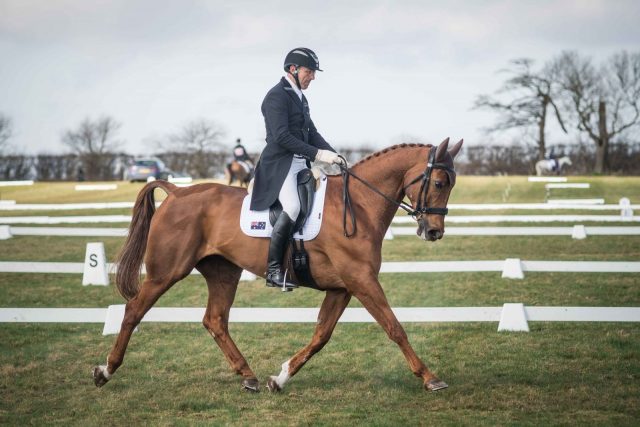 Alexander NJ and Bill Levett sit in 7th place on a score of 27.2. Photo by Tilly Berendt.

The first of the three CIC3* sections took to the centreline today, resulting in a female-dominated top five and a smattering of personal bests, too.

It was Gemma Tattersall and the Spike Syndicate’s Arctic Soul who held the lead for most of the day, scoring a significant personal best of 25.1. Under the old scoring system, this would have been a 37.7 — and their first trip under the 40 barrier, according to statistical whiz-kids EquiRatings. The rangy ex-racehorse hasn’t always made this phase an easy one for Gemma, who has had to ask crowds not to applaud at major events for fear of exacerbating his occasionally explosive tension. But the Spike who entered at A today was a horse transformed.

“He was really relaxed, and rideable, and soft,” Gemma said. “We’ve sort of picked up where we left off last year, which is very exciting because he did such a lovely test at Burghley. Today he came out and he was very supple — he was fresh, for sure, and we had to make sure we got up early enough to have a lunge this morning. But that’s what makes the difference in the marks — he’s soft in his outline now, but he’s forward. He’s so established now that he’s confident in the movements, and it’s all about confidence for him.”

With four top-ten placings at CCI4* level in his career, including last year’s Burghley, at which a single pole cost him the win, Arctic Soul is one of the most obvious contenders for this year’s Badminton title. But with WEG on the horizon, is Gemma tempted to play it safe this spring and focus her attentions solely on Tryon?

As it turns out, no — “I’ll go to Badminton to be as competitive as possible,” she explains. “At the end of the day, you never know what’s going to happen. WEG’s not until September, and so many things can happen in that time. I’m aiming for Badminton and obviously WEG is a huge aim as well — but hopefully I’ve got a few good horses behind Spike.” 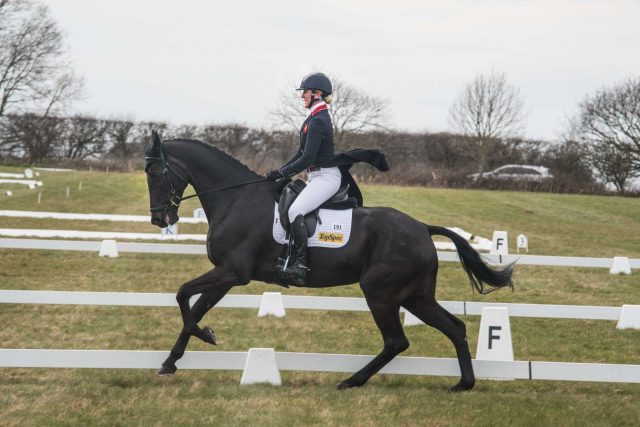 Nicola Wilson and Bulana: expressive for all the right reasons in the CIC3*. Photo by Tilly Berendt.

It wasn’t until late in the afternoon that Gemma’s comfortable seat atop the leaderboard was usurped, and it was done so by two of her fellow countrywomen. Nicola Wilson and Bulana may not be Badminton-bound, but if they can repeat the latter half of their 2017 season this spring, they’ll be an almost untouchable combination for the WEG.

Second at Luhmühlen and individual bronze medallists at the European Championships, Nicola and Bulana pair followed Gemma and Spike’s lead to post another personal best. Their score of 23.3, when calculated back to 34.9, is better than any of their scores at any international level and Bulana, another horse who has tended towards trickiness in the past, produced a malleable, pleasant test, with expressive but rideable extensions earning a smile from team performance manager Dickie Waygood. 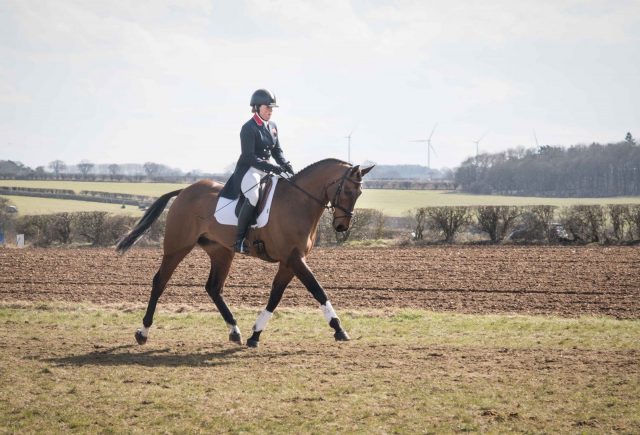 But one of the very last tests of the day would scoop the top accolade and the most remarkable personal best yet. Pippa Funnell‘s Billy Beware has had a quiet few seasons — indeed, he currently sits in 4th place on the Badminton waitlist — since a niggling injury saw him cut from the team for the 2014 WEG. Since then, he’s only contested three internationals — Burgham and Belton at the beginning of 2016, and Belton again at the beginning of 2017. In 2016 Billy Beware made the top 20 on both occasions, with dressage scores just shy of competitive and a smattering of time penalties across the country. Last year, he was eliminated for refusals.

His score today of 21.7 would have been a 32.5 under the old marks — exceptional by its own right, but especially so when looking at the horse’s historical scores. It’s nearly three points lower than his former personal best of 35.2, earned here in 2014. If his return to — and eclipse of — form continues throughout the week, perhaps we could look forward to the sort of competitive streak that made him such an exciting youngster, when he won four consecutive internationals as a seven-to-eight-year old. 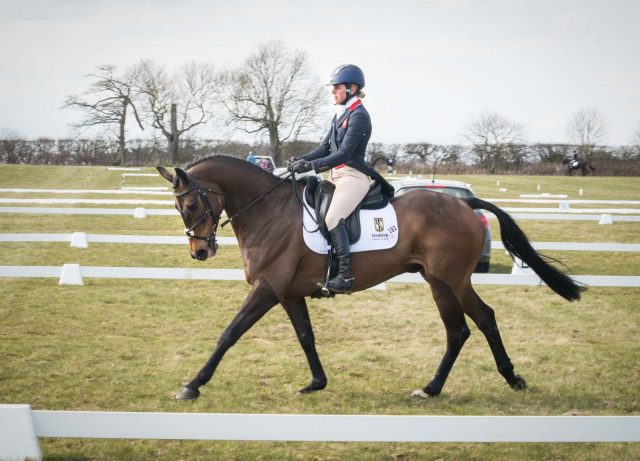 Izzy Taylor and Springpower — 5th on 26.2. Photo by Tilly Berendt.

The Great British girl power movement continued elsewhere in the top ten, as Pippa notched into 4th place with MGH Grafton Street. Izzy Taylor piloted the young Springpower into 5th place; this is the young horse’s second start at the CIC3* level, after a 7th place finish in last year’s Blenheim CIC3* for eight and nine-year-olds. Burghley runners-up Piggy French and Vanir Kamira sit in 9th place overnight on 29.5.

Stay tuned for more tomorrow, as we check in with top horses including Cooley Rorkes Drift, Mr Bass, Burghley winner Ballaghmor Class, the prodigal Ceylor LAN, Classic Moet and more. We’ll also be bringing you a gallery of behind-the-scenes images — imagine the first day back at school, but actually fun — and plenty of updates and opinions from every corner of the industry. Got any burning questions for your favourite riders? Leave them in the comments!

Until next time, Go Eventing! 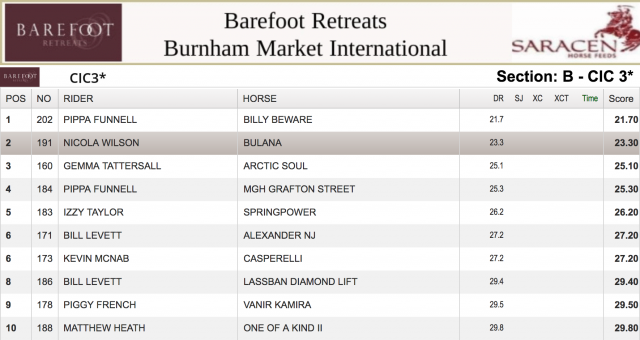