There’s an interesting phenomenon that happens in England once Burghley wraps up: winter. If you want to know what it’s like at Blenheim, imagine a lot of confused penguins, bundled up beyond recognition and bouncing off one another in the collecting ring because we’ve all gone delirious from a heady combination of icicles in the brain and horse madness. It’s rather good fun, actually.

With three days of dressage this year, rather than two, the CCI3* entrants are given the day off to relax (or panic about the enormous fences they’ll have to tackle tomorrow, probably). This opens up the main arena for the first phase of the final Event Rider Masters leg, while the 8- and 9-year-old CIC3* dressage continues in the second ring. Basically, there’s a lot going on, and more than once I’ve found myself wishing I had a Marauder’s Map so I can keep track of where these pesky eventers keep wandering off to. Also so I can keep an eye on Tim Price and regularly schedule in cuddles with his puppy, Scooby. #priorities. 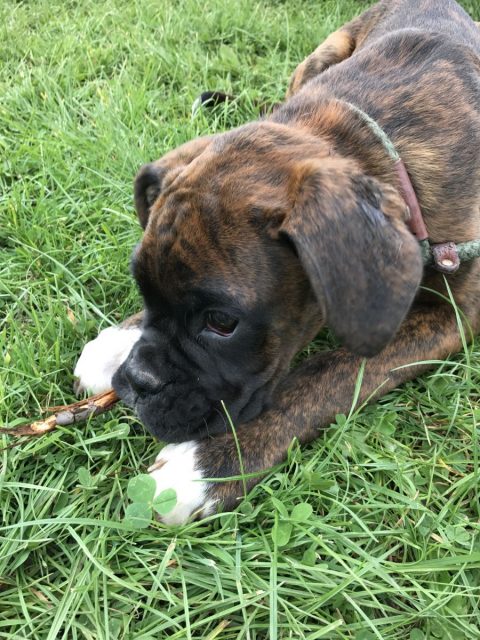 Really — can you blame me? LOOK AT HIS TINY PUP-SIZED STICK. Photo by Tilly Berendt.

The Price family — including baby Otis — was out in force supporting new mum Jonelle, who made her long-anticipated comeback to international eventing this morning, riding Classic Moet.

“I’ve surprised myself with how keen I am to be back — it feels so normal!” she said. “I’m not nervous to be back at all, but you do hear all sorts of stories about how it affects different women, but I feel just like I used to and I’m keen to crack on.”

Jonelle credits her quick return to the top levels with regular gym sessions and continuing to ride throughout her pregnancy. Husband Tim took over the ride on some of her horses and has posted some consistently impressive results with them, but “it was made very clear from day one that they were all coming back — he’s trying to put forward a case for a few of them, but tough luck!” 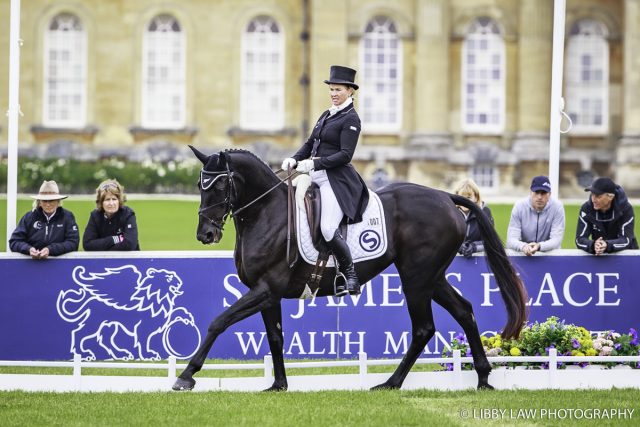 Jonelle Price and Classic Moet in the ERM CIC***. Photo by Libby Law.

Fellow Kiwi Andrew Nicholson rode through some tension with Jet Set IV to post a score of 43.9, with which he currently holds second place.

“He hasn’t done a big event since Barbury last year, and he’s quite a buzzy horse,” he explained. “Even when he gets tense, he keeps trying hard, so it’s probably not as quality a test as he can do, but he really is world-class.” 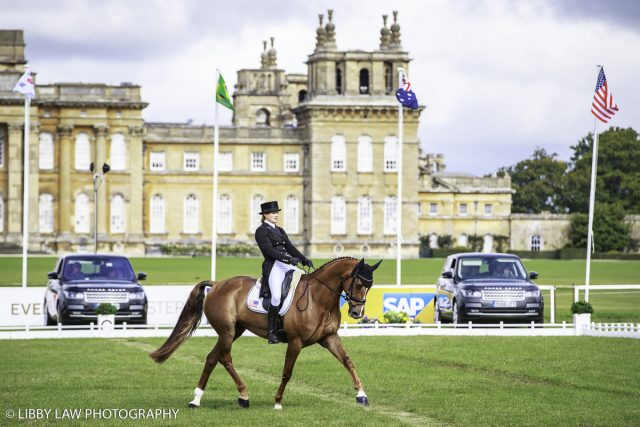 Katherine Coleman rides Back To Business. Photo by Libby Law.

British-based American Katherine Coleman had a shaky start to her test with Back to Business II, but put the pieces back together to score 53.3, putting her into 15th place.

“She tripped coming up the centreline for her first halt, quite badly,” explained Katherine. “I’m really pleased with her, though. She’s still quite green, and has struggled a bit with the changes, but those were really good today.”

Our ERM leader at the lunch break is Sarah Bullimore and Lilly Corinne. The chestnut mare hasn’t always been easy — hands up if that’s a sentence you can identify with — but the pair looked in great harmony with one another, posting a competitive 42.1 to hold pole position at the halfway point.

“I’m absolutely chuffed with her,” beamed Sarah. “She was a bit sharp going in, and she wanted to spook at the flowers and the displays and such, but she was on side and when I said ‘no, you’re OK, let’s do this movement now,’ she actually listened and said yes, which is a nice answer from her. She’s an amazing jumper, although sometimes she gets a bit excited and lets the occasion get to her, but she’s a real machine, so hopefully she’ll have a good crack in both phases to come.”

Sarah has been a familiar phase in the series, and says that to find herself in this position tomorrow afternoon would be a highlight of her season.

“We’ve not had the best season,” she explained. “It’s not been awful, but there have just been some little disappointments — so to win here would make it all worth it.”

Stay tuned this afternoon for the rest of the action from the final leg of the Event Rider Masters series, and don’t forget that you can tune in and watch every test, accompanied by expert commentary, by clicking here. Liz Halliday-Sharp and Fernhill By Night ride at 3:56 p.m. BST/10:56 a.m. EST, and Hannah Sue Burnett and Harbour Pilot will enter at A at 4:28 p.m. BST/11:28 a.m. EST.

If you haven’t downloaded the SAP judging app yet, I can’t recommend it enough — especially if you’re trying to shirk your responsibilities in the office. It’s the new Flappy Bird, guys.

The top 10 after the lunch break in the exciting final leg of the 2017 Event Rider Masters series.