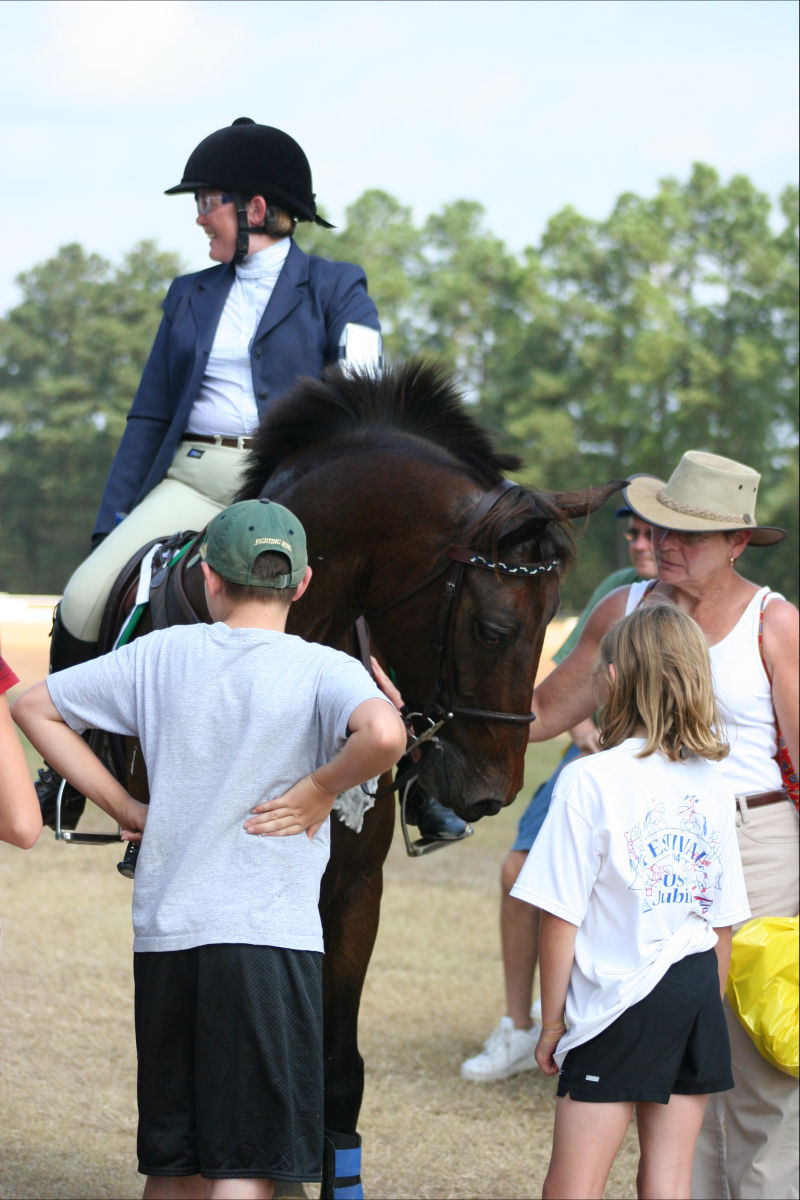 My kids and me (and my aunt Cindy) at the AECs in 2006, taken by my uncle, Michael Evertson.

I don’t remember exactly who said this or why. We were down at the ballpark’s lower fields, so it had to be when my son was at least 10 years old. I’d said something to another mom about my horse. “Oh,” the woman said, her eyes widening, then narrowing, “I’ve heard of you. You’re the mom with the saddle.”

The Mom with the Saddle.

I grinned, taking it as the compliment she didn’t mean it to be. I’ve heard of you. Once, three years or more before that, I’d cleaned all my tack during a Little League baseball game. I’d had a clinic the next day, so my tack needed to be spotless, and, believe me, there is nothing about watching 7 year olds play baseball that requires such intense concentration that you can’t clean a bridle at the same time.

The woman clearly thought it strange that I had an interest of my own more absorbing than my son’s potentially big-league baseball career. I, on the other hand, thought it strange that she thought that her son, or mine, or any of the other kids on the field, had a potentially big-league baseball career. They were good boys who played hard. The end.

Once one of the Little League mothers got so incensed screaming at her son and the team as a whole that my son, playing second base, screamed back. “We’re trying!“ he said. “Quit yelling at us!”

I never yelled. I showed up and cleaned my tack, or I knitted. Meanwhile, my children also showed up for me. “So, what happened at the second canter transition?” my 7-year-old son asked after the dressage at my first ever event. “I thought you were going to go out of the ring.” He thought about it, then added, “That would have made you eliminated.”

“I know.” Which was exactly what happened at the transition, inconveniently placed at A. Gully saw the exit and figured it was time to leave. I lost a stirrup but convinced him to both stay in the ring and to canter, which made it a success. Of sorts. It wasn’t exactly dressage, but then, neither was anything else I did in those days.

My gift to my children is that I have let them see me fail. They saw me fall off over the first fence in show jumping. Twice. Saw me bite back obscenities and then say them anyway. Saw me eliminated at the water. Saw me move up to Novice, then Training. Saw me galloping over the finish line at the AECs. They saw me do well and do poorly, and keep trying, and work through difficulties and withdraw when my horse didn’t feel quite right and kick on when it was raining and I was scared. I think, I hope, it’s been good for them. I can’t yell when they make mistakes, having made far too many of my own. They know that sometimes success is a relative term.

It’s been years since my son played Little League. My daughter plays high school tennis now. Last week, I kept a previous commitment instead of going to her second day of sectionals. She was playing one of the best girls in the state and could not possibly win. She called me when the match was over. “Mom!” she said, “on my serve I took her to deuce twice!”

Kim Bradley is one of our fantastic writers on Bloggers Row.  Be sure to check out more stories from Kim and other contributors on the Bloggers Row page: you’ll find a link at the top toolbar of this site, and the three most recent posts are displayed in the lower right sidebar.  Go moms, and go Eventing!