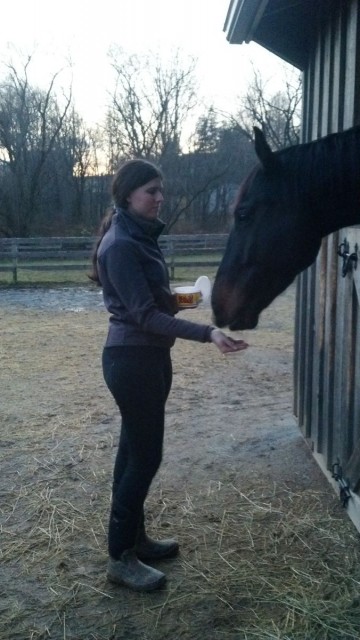 Me and my youngest "pony" Rufus. OK, NOT a pony, BUT it's the thought that counts.

Hi EN Readers! This year, I was inspired to write my own Christmas poem — a sort of spin on ‘The Night Before Christmas” with the two main subjects of the poem as a little girl and a pony. Hopefully you all enjoy reading it as much as I did writing it. I even got a little teary eyed when I read it out loud after I finished it, so you’ve been warned. Merry Christmas and Happy Holidays to everyone; no matter how you celebrate your holidays, I hope that they are truly fantastic. I know that I’ll be spending a little extra time giving each of my horses a hug and extra treat (or extra treats … as in plural!).

‘Twas the night before Christmas, when all through the stable,
the hay in the loft was stacked from floor to gable,
the aisle way was swept and AM grain measured,
as prompt feeding in the morning for the four-leggeds is treasured.

The horses all dozed peacefully in their stalls,
while in their dreams they ran with new Jolly Balls,
Even the barn cats had curled up to sleep,
And the barn mice scurried to find crumb without even a peep.

When out in the drive there arose such a roar,
that several drowsy heads popped over their stall doors,
The diesel pickup truck slowed down and came to a stop,
When what should happen, but the door opened with a pop.

A small girl hopped down onto the ground
And her boots started moving–clearly barn bound
All bundled up in a scarf, coat and mittens,
She paused to leave some toy mice for the big barn kittens.

The heads started bobbing, and eyes shone bright,
because the girl’s special visit was such a delight,
stopping at each door with a carrot in hand,
the girl gave each horse one treat as planned.

When all of the sudden came a soft nicker,
and the girl gasped and hurried all the quicker,
She moved towards the stall at the end of the row
Where a small pair of ears were pricked & eyes were aglow.

The girl’s face broke into a smile
and her best friend, her pony snuffed her face all the while,
She dug out a special apple from her coat
and another nicker broke out from the pony’s throat.

He took the special treat, crunching and munching
While the girl looked on with a shiver, fingers in her mittens bunching
She pulled off the mittens, sticking one hand inside her pony’s rug,
And wrapped her other arm round his neck to give him a hug.

The pony stopped crunching and bowed his head,
to hug the girl back, to make up for words that couldn’t be said,
For he was her pony, and she was his girl,
and they had a bond like none other in the world.

The girl and the pony together were froze,
until the girl gave her pony a kiss on the nose,
To the girl, her pony was the most wondrous sight,
and she whispered to him, Merry Christmas to you and have a good night!