I mean, come on now. If everyone who was a little bit lusty in their lifetime was condemned to the second circle of Hell, we’d basically be able to put on a below-the-ground Badminton. Which is an incredible concept. Also, the titular character is described as being in the very middle of his life. He’s 35. Can we just chill out a minute, Dante? Put that crisis back where it came from. Get a glass of wine. Now is not your time. 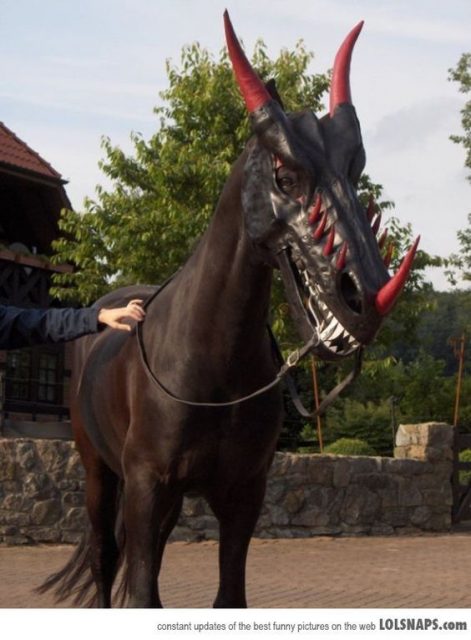 “You’ve got so much left to live for, man” — frightening but motivational devil horse.

Also, the whole reason the poor chap has to go on a walking tour of hell (Trip Advisor rating: 1.5 stars; the café wasn’t great) is because the girl he fancies, the actual Symbol of Divine sodding Love, has decided that’s the quickest route to go and chill with her in heaven. Her name? Beatrice. Beatrice. The least likely name for a shining beacon of hotness and hope ever.

Pictured: not a Beatrice.

Having said all that, the notion of eternal hellfire — with its varying degrees of fieriness — is a useful one. Like a little library of badness, organised by something less baffling than the Dewey Decimal System. You see, as you venture further downward, accompanied by your spirit guide (who was the ancient Roman poet Virgil in the original, but would probably be a cloaked, celestial version of Mark Todd in the remix) you travel through nine concentric circles, where like-minded naughties are grouped together in everlasting penitence for their earthly sins. Oh, and they get naughtier the lower you go. You know what we desperately need? An eventing version, of course.

You won’t find tickets to our final destination on Kayak, but keep your arms and legs inside the vehicle, because the Ghost of Mark Todd Past is going to take you on a strange journey … straight to the depths of Eventing Hell.

When you enter Eventing Hell, you’d be forgiven for thinking that you might have taken a wrong turn. That’s because the First Circle is, actually, well, quite nice — fringed with verdant greenery, lined with well-maintained post-and-rail fencing, and perpetually mild.

You see, this isn’t proper Hell. Not yet. This is something in between — a state of limbo, or purgatory, if you prefer. No one here has done anything really bad, but …

Here dwell the well-meaning aunts, mothers, fifth-grade teachers fed up of trying to mark homework through an incomprehensible scramble of pony doodles — anyone who uttered the words “it’s just a phase” when you tried to explain how utterly crucial horses were to your wellbeing. We won’t dwell here for long, I’m afraid, but before we go, flip the switch that turns the television screens on. They’ll be forced to watch your latest dressage test, on repeat, with full commentary and rumination by yourself.

Now quick — shut the door before they ask you how your love life is going  and let us descend inward, to …

In the Second Circle of Eventing Hell live those whose eyes become little cartoon hearts when they see an advert for a talented — and suitably expensive — competition horse. These people have likely only competed at a low level, if at all, but the established CCI2* horse (with scope to go all the way, professional or experienced amateurs only, homes will be vetted, POA) tugs at their exposed heartstrings.

“The dapples! Oh, lord, the dapples!” they howl, keening voices carried by the wind.

“Would you consider a loan?”

“How about a payment plan?”

The wind, of course, is a constant presence in the Second Circle of Eventing Hell. That’s because the Facebook sales advert commenters, the meandering phone-call makers, and those that show up to try horses they have no intention of buying are doomed to spend eternity riding the horses they covet — those bred-to-the-hilt four-year-olds, the Advanced machines, that one horse that Boyd Martin sold mid-season, saying, “cor, it’s a tricky bugger, but it can’t half jump – if you can stay on it!” A lovely time is had by all — all the horses, anyway, who, freshly-clipped and buzzing on a heady combination of racehorse mix and iron tonic, feel that ferocious wind under their tails and merrily cartwheel around Hell, for eternity and beyond.

Traditionally the eternal carpark for gluttons, in Eventing Hell, the Third Circle is home to hogs of a slightly less gourmet nature. You know the ones: they cut you up in the warm-up ring, three strides before the oxer, or they send their lackeys in to guard their fence of choice, building it up to unnecessary heights and glaring at any other hapless rider who dares approach. They’re the people who stop on the fence to chat to their trainer, the usual suspect for any unattended piles left in the wash bay, and the boarders who will happily swan off, leaving their horse on the crossties and IN EVERYONE’S WAY for hours.

Faster than a speeding sinner.

Rather than three-headed Cerberus, the Third Circle of Eventing Hell is overseen by thousands of gleeful, yappy dogs, whose owners let them off the lead at an event and never saw them again. Here, they serve their life’s purpose for all eternity: chasing at the heels of the Gluttons as they navigate an endless obstacle course fashioned out of all the objects they left out for someone else to put away.

Traditionalists, put on your shades. Things are about to get #FUNKAY. As we enter the Fourth Circle of Hell, we meet those who were overcome by a bad case of the better-thans. These green-eyed folk measured their worth — and the worth of those around them — by the contents of their tack box. Anything less than the finest French saddlery? Eugh. Hardly. Their symptoms were easily spotted in life — ever heard of matchy-matchy? Ever suspected that someone spent more time coordinating their outfit than actually paying attention to their horse? Sod Sartre’s insistence that hell is other people — in the Fourth Circle of Eventing Hell, it’s 10,000 tangled polo wraps … and none of them match. 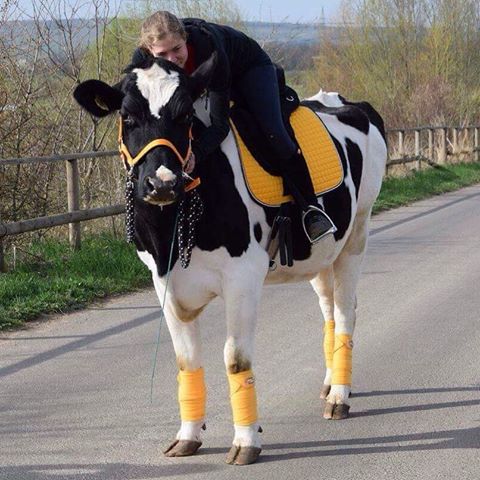 The devil doesn’t wear Prada, the devil wears custom Parlantis and matches her underwear to her horse’s fly veil.

Ugh, let’s not hang about here for too long, the air stinks of horse you-know-what. That’s because there’s literally a river of it. Yes, a river — it’s the variety that you scrape off the wall, rather than shovelling from the floor.

But don’t feel too sorry for the poor souls who fester in the Fifth Circle of Eventing Hell, up to their necks in smelly sadness. You see, the river is the physical manifestation of all the crap-talking this lot did in life. This, dear visitor, is where the breed snobs live.

They would never knowingly sit on a horse without a Fernhill or Cooley prefix, and god forbid you meet them in the warm-up on some sort of stock breed. They’re the first to proclaim that the modern incarnation of eventing has left the Thoroughbred behind — and good riddance, according to them — so for their afterlife, they’ve been entered into the RRP Thoroughbred Makeover. For all eternity.

“Can’t wait to never, ever give you the right lead, sucker.”

Now get in the boat, because we’re sailing this swamp, straight into …

Don’t mind the buzzing, there’s some faulty wiring here and no, nobody is coming to fix it. You see, this is where the internet criminals linger, and down this low, we’re still on dial-up.

Here, the armchair trainers linger, alongside the horse owners who consult strangers on the internet rather than an actual veterinarian when their horse has forcibly removed a leg, and, of course trolls. Trolls on trolls on trolls.

The armchair trainers are forced to put their advice into practice. The vet-phobic owners are treated for a neverending series of moderate ailments by doctors whose training comes entirely from WebMD. And the trolls? They get to spend the rest of eternity trying to talk Andrew Nicholson into creating a Twitter account. 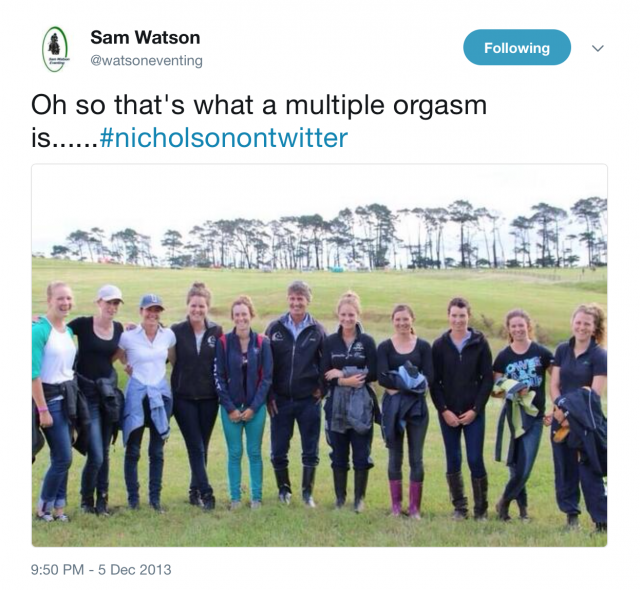 They also have to read him the entire #nicholsonontwitter back catalogue.

Two very distinct — and completely contrary — groups of people reside in the hellfire of the Seventh Circle of Eventing Hell. To the left: those who use excessive force, harsh gadgets, and a blatant lack of compassion to control their horses. To the right: those who throw abuse accusations at anyone who uses a flash noseband, a small pair of spurs, or, dare I even say it … a bit.

“And then she told me my horse was lame because shoeing forced its feet into an unnatural shape!”

Never the twain shall meet? Hardly. Opposites attract in a new and novel way in the Seventh Circle as, condemned to eternal silence, the resident sinners are forced to joust with one another. Tackless.

Pull up a chair and grab a drink; the Ghost of Mark Todd Past is an excellent commentator.

After a brief respite, it’s time to journey yet further into the depths of Eventing Hell — but fear not, weary traveller, for we are nearly at the end of our long and harrowing journey.

This vast amphitheatre is heaving with the liars, cheats, and fraudsters of the eventing world. Unscrupulous horse dealers prowl amongst working students who lied about their experience level or took shortcuts in their work, and the boarders who shamelessly and obviously embellish their tales of success.

Like Sisyphus and his boulder, the denizens of the Eighth Circle of Eventing Hell must throw up a mountainous muck heap, from which the top always crumbles back down and at which the pitchforks are always missing a tine. But there is worse to come.

In the very depths of hell lie the worst sinners of them all.

As you descend into the core of the devil’s domain, you hear it before you see it — a slow, rhythm, sinister grinding sound, like the quiet toil of machinery, or … or like many vast teeth, masticating slowly.

You feel many thousands of eyes turn to observe you and, despite the constant sizzle of hellfire, the sweat dripping down your neck grows cold. You are here, defenceless, amongst the very worst that Eventing Hell houses. Even the Ghost of Mark Todd Past has fallen silent in deference. 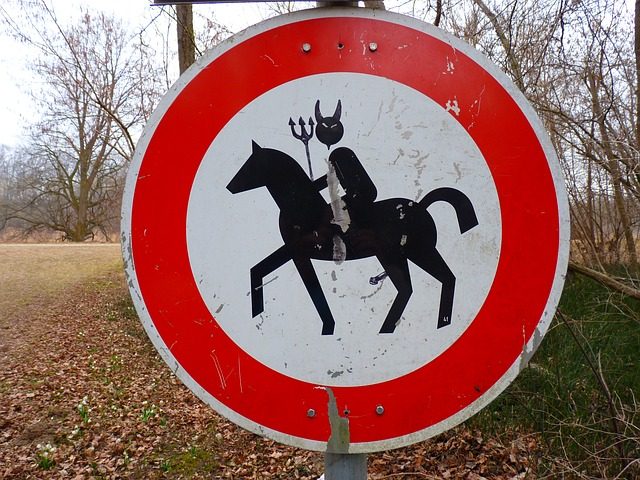 This is the final resting place for horses who throw shoes the night before a competition, those who are mysteriously three-legged for the one hour in which you had scheduled a lesson, and the corrupt souls who discover their inner bucking bronco upon stepping onto the centreline. As you look on, one slowly lifts a front leg. A shoe, dangling, catches the reflection of the flames. It teeters, is still for a moment, and then drops to the floor. The horse doesn’t break eye contact. You shudder, for this is a place of true evil.

Here, these most devious of horses repent for their lifetime of sins by … eating their way through an endless pile of haylage and looking, frankly, a bit smug about it. As it turns out, Satan is a soft touch.

You’ve traversed the Nine Circles of Eventing Hell and lived to tell the tale — and preach the gospel of a life lived without sin. Go forth and spread the good word. And put your grooming kit away while you’re at it, you heathen.