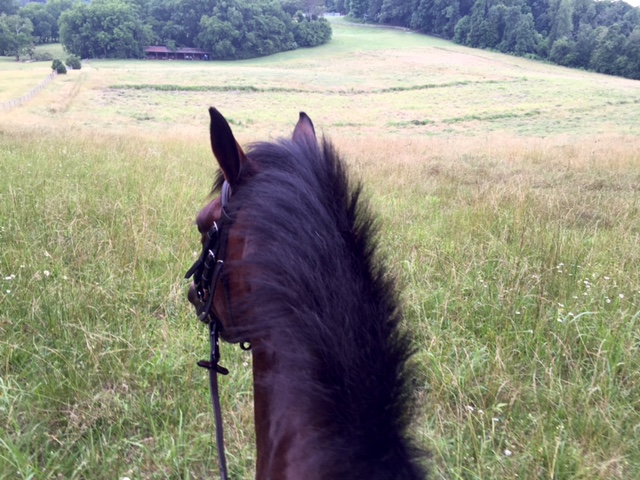 “Some people who are going through a midlife crisis splurge on a sportscar, take up skydiving or have an affair with the mailman. Since I am a 10-year-old horse crazy girl trapped in a 34-year-old body, I bought myself a pony,” Leslie Wylie writes in Just a Little Pony, part 1 of her new blog series. In part 2 Leslie and Princess, a 14-hand pocket rocket who competed through Prelim with her former lady-in-waiting Lexy Funk, embark upon the getting-to-know-you process.

Princess stepped off the trailer at her new Tennessee home like she owned the place, which I gather is how she rolls through life in general. Everytime I walk out to the pasture to catch her, I feel like I ought to curtsy first. It’s Princess’ world and I’m just lucky to be living in it.

We spent our first week together romping around the farm, getting to know one another. We went on long walks in the woods and talked about life, dreams, and assorted secret girl stuff. As the grand finale I’d let her run away with me up the big hill in the back pasture or nose the neighbor’s minis over the fence before we headed for home.

Eventually, though, I knew our life of leisure wasn’t going to cut it if we ever wanted to make it to the Pony Olympics. It was time to start getting down to business.

When it comes to the subject of dressage Princess and I had a lot in common. I.e. we both think that, in comparison to more adrenaline-fueled activities, fancy-prancing around in circles is pretty dumb.

After our initial dressage schooling session, which honestly made me want to shoot Princess with an elephant tranquilizer dart, I bit the bullet and got a last-minute spot in a clinic with Big Uncle Jim Koford.

Jim is the patron dressage saint of eventing nutters everywhere. An international Grand Prix rider who once moonlighted as a four-star eventer, he gets that we’re “a special breed,” and that sometimes what makes a horse brilliant over fences can make them a little spazzy on the flat. Which is probably applicable to some riders (me! right here! this girl!) as well.

My favorite horses tend to be well-meaning maniacs, which is inconvenient at times but Jim has always been brilliant at getting the best out of our partnerships. He’s never judgemental and always explains things in a way that has cross-discipline application.

Jim: “Your horse needs to be more adjustable on the flat.”

Jim: “Having a more adjustable horse will shave seconds off your cross-country time.”

Naturally, I couldn’t wait to hear what he had to say about my new acquisition.

“She’s got some Miley Cyrus in her,” he observed calmly, watching my 14-hand wrecking ball skitter across the diagonal. But over the course of 45 minutes Jim worked his usual voodoo, channeling our can’t-stop-won’t-stop energy into something a little more Hannah Montana than Miley.

By the end I felt like we could have dropped a canter pirouette bomb or two. Maybe there’s hope for us yet?

Swooshing her tail tic-toc in time with the beat… everything this pony does is adorbs, I cannot even handle it. ❤️

Step 2: Jump all the thingz!

Here again, I figured it was better to kick things off with a professional opinion. For help I turned to my secret weapon: hunter/jumper trainer Amanda Melton-Finger.

Actual eventing trainers are great when you can get ’em but I think there’s a lot of good stuff to glean from other disciplines as well. Amanda, whose Westwind Equine Training Center is just down the road from us, has been a wonderful resource in the past, sanding down my rough edges and reiterating the importance of civilized techniques like actually counting your strides down a line. She’s also knows ponies better than anyone in the land, having spent literally hundreds of hours ringside in “ponyland” at A shows.

… I knew she could answer some of my burning pony questions.

After all, Princess was once a member of the A-circuit pony jumper elite herself and her siblings are all at Pony Finals each year. I like to imagine them at a family reunion, her hunter-ring brethren walking the straight and narrow and Princess the black sheep eventer cousin.

Her career path could have been much different. Legend has it that she ended up an eventer after getting sent down the road from USET show jumper Aaron Vale’s barn — maybe her changes weren’t “auto” enough, or maybe she offed some 10-year-old. Princess isn’t exactly a stick-and-spurs kid’s pony, you know. 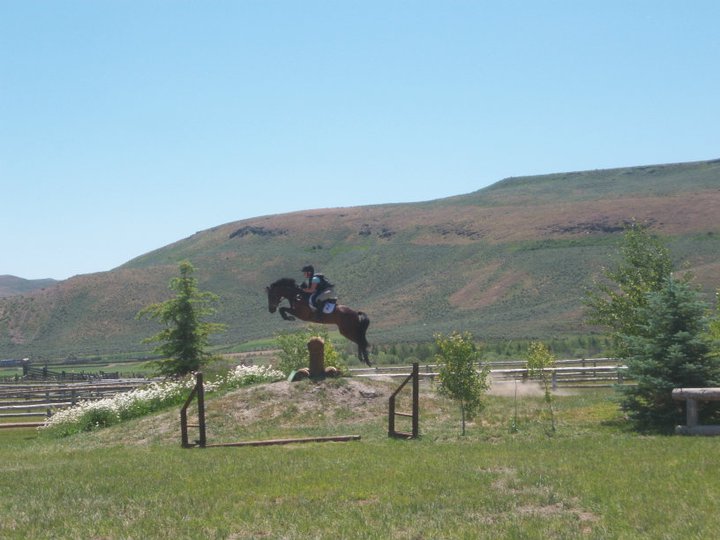 Fence too small, must jump higher! Lexy Funk and Princess, showing off her scope. Photo by Aimee Towell.

As with Jim, sessions with Amanda are judgement-free zones. She didn’t bat an eyelash when I shared my Princess homicide theory.

“I had a man-killer once,” she commiserated, and the tone of her voice made me suspect she wasn’t joking. Clawing the air like a T-Rex for emphasis, she said he walked on his hind legs for the first two months she had him, trying to take people out. But eventually he came around and now spends his days snoozing around child/ammy adult courses.

It’s not that Princess is evil, at all — in fact, she’s one of the sweetest horses I’ve ever met. She just has a lot of zest for life and, like a whiz-kid prodigy forced to sit down and do multiplication tables, a low tolerance for fences lower than 3’3″ or 3’6″.

Amanda gave me some good food for thought and I left Westwind feeling like I had a good gameplan in place.

Part 3 is in already in motion, can’t wait to tell you all about it! Until next time …