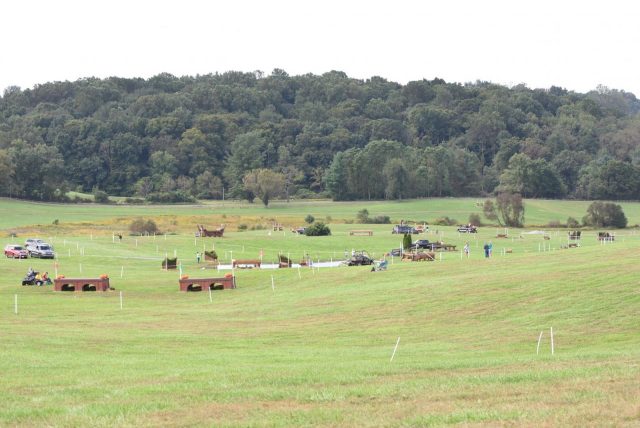 Updated 9/16 2:39 p.m. eastern: Denis Glaccum, President, PFI Events, Inc., announced this afternoon that Cuyler Walker, a PFEE Board member and landowner, has cancelled the lease for the property. Mr. Walker notified PFI Events and the USEA of this decision earlier in the week on Monday, Sept. 14. The loss of this event is a significant one for our sport. Our intention was to open a discussion, guided by the governing organizations, to make sure diverse BIPOC would be welcomed and included in every area of eventing. We are deeply saddened that the property owner has chosen this path rather than join us in an open discussion about inclusivity as it reflects on the name of this iconic venue.

2020 has brought about a reckoning in many ways, between a global pandemic and catastrophic weather patterns; there has also been a collective realization of how little we have done as a society to combat systemic racism. The world as we know it has changed, and we’re all struggling to adapt and evolve. Here at EN, our team’s education has been and continues to be ongoing. Our learning curve when it comes to fighting racism has been steep, and we’ve had our own missteps in efforts to grow and change. But we feel strongly that we should use our platform to help address issues that are facing our sport. We have been encouraged to see USEA and USEF prioritizing diversity and inclusion efforts as well.

To that end, one thing that we have become aware of is the troubling associations inherent in the name Plantation Field. Specifically, the word “plantation.”

To be clear, the EN team loves this venue: the majestic hills, the gorgeous rings, the top notch organizers and the incredible volunteers. The hard work and generosity of all involved with the event including the land owners, organizing board, sponsors and everyone who works behind the scenes has made it one of the most iconic and beloved events in North America. We look forward to it every year and wish everyone competing in this year’s edition, which kicks off on Thursday in Unionville, Pennsylvania, beautiful late-summer weather and a safe, successful weekend.

We believe strongly that the people associated with this event never had any objective to offend with the event’s name. In fact, the proceeds from the 2016 Plantation Field event went to benefit Work to Ride, which gives disadvantaged urban youth the opportunity to learn to ride and care for horses.

We also believe that we do not have the right to determine what others are offended by.

While the purest definition of “plantation” may simply be a piece of property that has been farmed for a long piece of time, part of the definition mentions that those who worked the land were usually resident laborers. Colonization all over the world meant that while sometimes the plantation labor was through indentured servitude (often a cruel endeavor in and of itself), primarily plantations were worked by enslaved people, and most Americans associate the term with slavery. We have heard from BIPOC equestrians that the name is problematic for them. One was asked to groom there by a friend and agreed to go, resigned to the fact that “horse people just don’t understand” why the word plantation does not conjure up a peaceful, pleasant scene. Asking people of color to come visit, to spectate, volunteer, or compete, at a place called Plantation is insensitive at best and works against our efforts to implement more diversity in the sport. If we truly want eventing to grow, should we not embrace opportunities to demonstrate our commitment to inclusion?

This is not the first instance of a sport coming to terms with its questionable naming history. Earlier this year, the National Football League team based in Washington, D.C. changed its name to the Washington Football Team, a placeholder to replace the racially derogatory name of “Redskins” that had been used for the past 87 years. This choice was made after pressure was brought from corporate sponsors, including FedEx, which holds the naming rights to the stadium in which the team plays.

In the throes of the conflict, team owner Dan Snyder repeatedly voiced his resistance to the name change, even after a formal petition to change the name was filed with the U.S. Patent and Trademark Office in 2006. And yet, in the face of a country in the midst of grappling with its own troubled history, it became clear that Dan needed to face the music: things were changing, and it was time to evolve.

Meanwhile nationwide, “plantation” place names and the word itself are under new scrutiny, as for many the word conjures images of large farms staffed by slaves in the antebellum South. In June, Rhode Island (officially named “the State of Rhode Island and Providence Plantations”) removed “Providence Plantations” from official documentation and planned to vote on an official state name change in June. A few years ago, Cornell University changed the 50-year-old name of Cornell Plantations to Cornell Botanical Gardens in response not only to concerns from BIPOC students but also to better reflect the mission of the gardens.

We realize that Plantation Field’s 20-year-old name is rooted in the plantings on the property and not in a known history of slavery at the site. We are also aware that the surrounding local area is abundant with abolitionist roots, which should be celebrated. But the history of our nation, and even of Chester County, Pennsylvania, is inseparable from slavery; some Pennsylvanians enslaved people of African descent as late as the 1840s (a gradual emancipation plan had begun in 1780). And the fact remains that the word “plantation” has painful and racist connotations for BIPOC and is at odds with the message our sport is otherwise trying hard to project: that BIPOC are welcome, included and safe in eventing.

It is not right to always wait for BIPOC to point out issues like this. It is the responsibility of white people to also see the issues and put themselves in uncomfortable positions so it is not constantly the burden of BIPOC to need to call out problematic terminology and therefore risk being labeled as troublemakers. If changing the name creates a more welcoming sport for all, then we should make these changes.

Additionally, we take seriously our responsibility as stewards of our sport’s public image, which in this moment of nationwide racial injustice reckoning could easily be jeopardized by something as simple as a name, however well-intentioned. Equestrian sport has received enough negative attention in the mainstream media this past year; we don’t need more.

Ultimately whether Plantation Field changes its name is up to the event and its governing bodies. And ultimately, our talk as a media outlet is cheap. We can only seek to influence those in positions of power to make positive changes. In this case, their actions speak louder than their words. We are also obligated to perform our job ethically. Silence on this topic would not be responsible in light of the issues that have surfaced this summer. We must be willing to draw attention to problematic terminology if we are to be productive as allies of a diverse community. In our process of doing so we have taken care to minimize the potential for negative escalation and maximize the potential for change.

EN reached out to USEA and USEF in June to express our concerns about the Plantation Field name. But change is often a slow moving train, especially with organizations where there are multiple channels of bureaucracy to move through. As the event drew nearer it became clear that a name change would not materialize. We had to make a decision as a media outlet about our own path forward, and we agreed that we were no longer comfortable using the word “plantation” on our website. After engaging the event to explore alternative ways we might reference the event, such as the FEI nomenclature of ‘Unionville,’ we were informed by Plantation Field founder Denis Glaccum that EN was not welcome to attend nor cover the event. With regret we will be honoring that directive.

These issues are not going away. Our team stands firmly as allies of riders of all races, backgrounds, and sexual orientations. As the wider lens of society shows us, it’s time to make decisions that further our sport for the better, creating an inclusive and welcoming environment for all, not just those who already participate.

While we won’t be covering Plantation Field this weekend (and this will be the final time we refer to the event as such), we hope to return in the future and would love to applaud its leadership for updating the event’s name to one more befitting of the area’s abolitionist history. We know that the eventing community at large would as well. To all those who are competing this weekend, we wish you the best of luck.