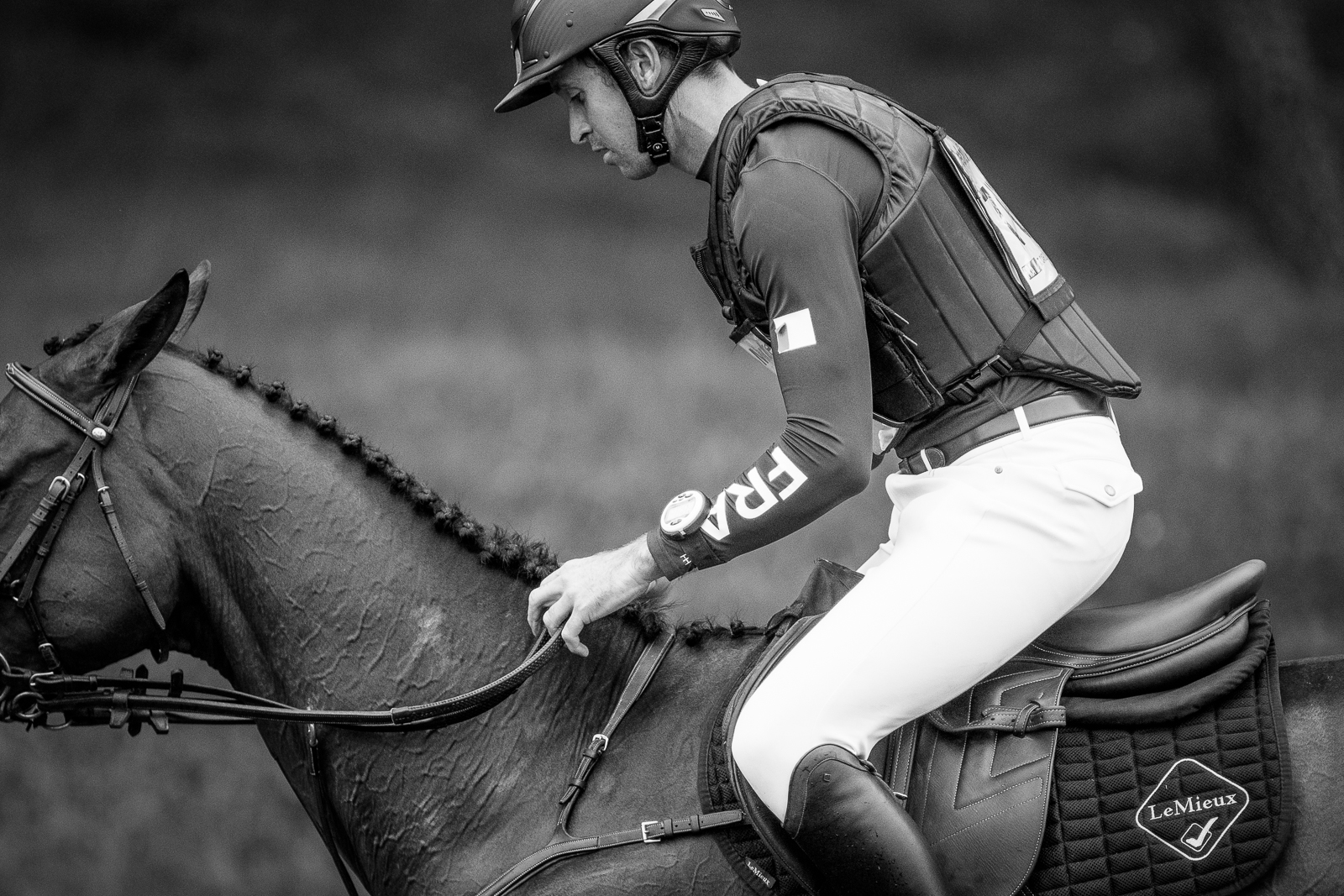 Could a quiet focus be the key to sporting success? Photo by Tilly Berendt.

“I’ve won most of my matches – probably all of my grand slams – because of what’s upstairs, not anything else,” Serena Williams told Sports Illustrated in 2015. Regulating emotions, staying calm, and maintaining focus are essential skills for athletes. Recent research into the “quiet eye” phenomenon shows that this mental performance may be connected to an athlete’s eyes and vision.

You may have seen it if you’ve set jumps for a rider in the warm-up area — the look in a person’s eye in the last few strides before a fence. Up close, you can see it: there is a quietness, an extreme focus, that occurs. This look in the eye is one that seems incapable of being distracted. You might also see it in the moments before a rider slips their reins to jump into a water jump, or before they come down to a final halt on the centerline. The look is one of extraordinary focus and stillness.

Scientists call this phenomenon the “quiet eye.” The ability to focus intensely, but also calmly, has been shown to occur in conjunction with this particular “look.” It is likely what gives Serena Williams and other top athletes their edge.

As David Robson writes in an article for BBC Future, the “quiet eye” phenomenon is correlated with a “sensation of effortless concentration, in which your mind is clear of everything except the task at hand.” Kinesiologist Joan Vickers has studied the quiet eye by hooking up athletes to a device that tracks their eye movements. Her finding is simple: better athletes tend to focus longer on a particular point. For example, with golfers, she found that the better players had a longer and steadier gaze on the ball just before, and then during, their strike. Less experienced golfers, on the other hand, shifted their focus between different areas.

So what is happening during this moment of the “quiet eye”? Crucially, in the most stressful part of a game, the athlete is slowing down their mental processes, rather than speeding them up. Researchers have also found that in this moment, athletes have lower heart rates. This seems to suggest that the quiet eye repels distraction and calms the athlete during the critical moment.

Have you ever lost focus during a dressage test? Felt stressed during a show jumping round? Struggled to stay calm and focused during a cross country round? (I have.) The idea of maintaining focus by honing in on a particular point makes a lot of sense for riders as well as other types of athletes. Instead of getting distracted and flicking our eyes between lots of different things in the arena, we are likely better served by focusing on one thing, whether it be the letter toward which we are riding as we trot across the diagonal, or the line on which we are trying to stay as we navigate a combination of jumps. Instructors often encourage riders to look where they are going, but the idea of looking, and really seeing, sometimes eludes us. That focused vision provides not only clarity of direction, but also focus.

Can you teach the “quiet eye,” or is it innate? Research suggests that the skill can be learned. The same researcher, Vickers, tried to train the quiet eye into a group of university basketball players. She attached them to eye-tracking devices so that they had heightened awareness of their eye movements as they practiced free throws, and over the next two seasons, their performance improved by 22 percent. Their free throw average after going through the study exceeded that of the NBA average. The control group, who had not undergone the quiet eye training, only improved by 8 percent. While most athletes probably do not have access to eye-tracking devices, being aware of eye movements and practicing control of the gaze can, it seems, lead to improved performance.

Riding is a physical sport, but it is unique in that the primary athlete is not the human. The horse is the one doing the dressage movements, galloping the distance, and jumping the jumps. The rider is orchestrating, balancing, signaling, improving, and helping the horse, but the horse is ultimately the one moving his feet and making the task at hand happen. In such a physical sport, it is easy to focus on the physical aspects: the fitness, the scope, the agility, the suppleness. But just as many sports commentators still focus on physical rather than mental strength of athletes, as riders we also tend to overlook the mental side of things. The mental capacity to focus, to improve a performance that is not going to plan, and to stay calm in moments of extreme anxiety is what may matter most.

The research finding that expert athletes actually slow down their thinking at the crucial moment in competition is instructive. I sometimes come out of the show arena thinking “that course happened to me.” Rather than a feeling of my own riding and plan executing the course, I feel as though the course was just happening and the jumps were coming so quickly that I was doing triage. This feeling is probably a result of my brain (and likely my horse’s brain) moving too quickly. We all do it; we all succumb to stress. But knowing that there is scientific research behind the idea of athletes slowing down their mental processes in these stressful moments shows that ability to slow down really is something we should all strive to achieve.

Uniquely, in our sport, there are two athletes. So do horses have the “quiet eye” as well? It may not be backed by scientific research, but anyone who has watched a top horse study its jumps in the final strides of their approach might agree that there is some aspect of a quiet eye phenomenon occurring in the equine athlete as well. It may be what we have customarily called the “look of eagles,” but in fact, it could be an amazing athlete honing their focus.