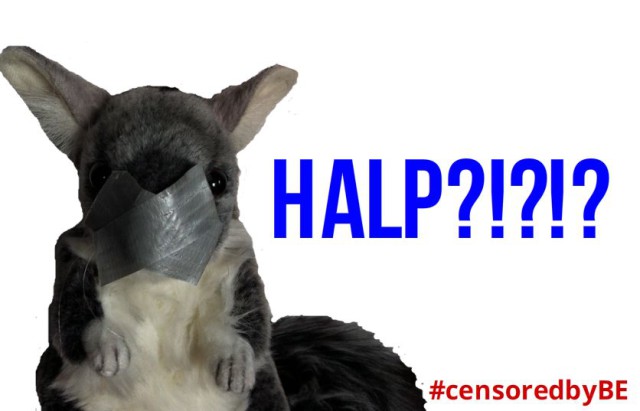 Here at EN we’ve been having a heyday with British Eventing’s new Social Media Rule. And by “we” I mean “the Chinch,” EN’s furry freedom fighter who sprang into action upon learning that BE’s members had been warned to watch what they post to social media… or else.

Sometimes you just have to fight ridiculousness with ridiculousness. You want to come after someone for speaking their mind on Twitter, BE? Fine. Come after the Chinch. Accuse him of sedition — he’s certainly guilty of it. We’d love to be a fly on the wall when you press charges AGAINST A STUFFED ANIMAL.

Failure by a Member to comply with the provisions of this Rule may result in British Eventing taking disciplinary action against that Member in accordance with these Rules. Civil and/or criminal proceedings could also be brought against members for breach of this Rule where applicable.”

Really, guys? But this is my favorite part:

Who did the BE hire to write that? BetterCallSaul.com? Because it sure doesn’t sound like it was written by an organization that is in touch with or has much faith in its membership.

BE is raising a really good point — we all need to be mindful about what the information we share on social media — they just went about it the wrong way. Instead of conveying something to the effect of “Hey, being mean/insensitive/dishonest on social media isn’t doing anyone any favors, we’re all in this thing together, here are some things to keep in mind for the future” they got all militant about it: “If you post something we disapprove of, we will take you AND the post down.”

Of course there was a backlash. You can’t bully people, or chinchillas, into keeping their traps shut.

BE acknowledged it yesterday via this so-called rule clarification:   ‘

For the avoidance of doubt, BE is not wishing, or trying, to curtail free speech or prevent anyone sharing their thoughts on any issue that they may wish to do so. Social media is a great channel for people to share their thoughts and experiences, discuss topical issues, ask questions, and so on.

There are occasions though when the line is crossed whether inadvertently or deliberately and unfair, defamatory, derogatory, or simply misleading comments are posted and this is what we don’t feel is appropriate because of the consequences of inappropriate postings.

Welcome to the 21st century, BE! You’re going to love it here. There’s this thing called the Internet — it’s pretty cool. The bad news: It is also totally out of your control. And like a horse that doesn’t want to be caught, the harder you swing your lead rope around and try to chase it, the faster it’s going to run.

The good news: We aren’t dummies. We’ve been living in the Internet long enough to know that not everything we encounter in this lawless jungle is true. Keyboard Cat isn’t actually playing the piano. That Nigerian prince isn’t actually going to transfer a large sum of money into our bank account.

Don’t feel like you have to protect us from all that is, as you state in BE Social Media Rule Section 6 Article A, “threatening, derogatory, obscene, indecent, seditious, offensive, pornographic, abusive, disparaging, racist, discriminatory, menacing, inflammatory, blasphemous or defamatory.” These adjectives basically describe about 90% of cyberspace, so calm down: We’re better at filtering information than you think.

There are always going to be terrible people out there shouting terrible things into the Internet wind, and no so-called “Social Media Rule” is going to stop them. The only thing it’s going to do is irritate the rest of us. Now, if you’ll excuse me, I’ve got to go peel some duct tape off a chinchilla’s face.