After a mountain of research, and a lot of issues with my horses (you can read the backstory here), saddle fitting day was upon us. My local County Saddlery representative, Allison Meyer, made the trek out over 2 hours north from where she lives to the far boondocks in the northern tip of New Jersey where my farm is located. My friend Kristen, an amateur Novice rider, was nice enough to ride with me to act as a second opinion to see if there was really a difference in the saddle, regardless of rider. 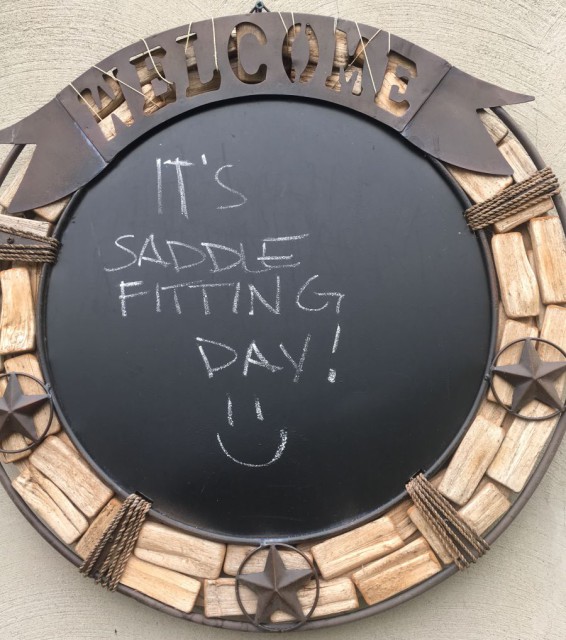 The challenge that had always been presented to me in the past was that wool would conform to ONE horse and therefore if you wanted to use one saddle on multiple horses, you needed to get a tree to fit the widest horse on a foam panel saddle that wouldn’t conform the way wool would, while still offering shock absorption to protect their backs.

However, the issues I were having is that my very lovely French saddle with foam panels wasn’t working for any of my horses, and I was really at a loss for what to do. Sure, it fit me well, but at best, my horses moved okay in it. At worst, my harder to fit and more sensitive horses were resistant to working at all.

Tyler, my former FEI international show jumper/eventer was a prime example. He moved beautifully on the lunge, but even with spurs and a crop, would barely be willing to trot under saddle. Having a saddle that worked for no one wasn’t any good, so I decided to revisit wool flocked saddles, and here we were.

And what a challenge it was!

Starting right at 9:30 a.m., we started in the barn with back tracings and then tacked up two at a time and headed up to the ring. First up were Tyler and Duke. Tyler is the Selle Francais who had started this challenge, and Duke is my Clydesdale/Thoroughbred cross who frequently hunter paces, sometimes fox hunts, events and even dabbles in hunters as time permits.

Tyler was hard to pin down. We started in the foam-panel saddle and he was reluctant to move forward, despite a brief lunge session before getting on where he demonstrated his lovely gaits with lots of enthusiasm We then went to wool saddles. A narrow tree was too narrow. A medium tree was too wide. We didn’t have a medium-narrow that fit right.

He preferred the Solution tree for his wider shoulders while still allowing wither clearance to the Innovation tree, which is a little more flared at the ends, and he found that one uncomfortable. He went better than the French saddle which we started in, and each time we got a little closer, but nothing was a real a-ha! moment. The closest we got was the medium tree Solution that he kept offering to canter rather than trot in, but something still seemed a bit off. Better, but not amazed. Made a note of it and moved on.

Duke felt different immediately to both me and Kristen (she’s ridden him before as well), and he was more sensitive and willing to move forward in the Solution tree than the Innovation. He never really cared for the air panels as he’s a big mover, so we skipped that on him and just looked at the other options. That made sense as he’s somewhat high withered, but being part draft, also wide shouldered.

We swapped a few saddles and both Kristen and I took turns and agreed he went best in the Solution 17.5” H/J Soft Seat — not only was he even more responsive than ever through the back to my queues than in my foam saddle, he was less stuck to my leg over fences like he can usually get. I didn’t expect much of a change here, as he’s not that sensitive and of all my horses, I thought my old saddle fit him best, but it was a noticeable difference! Score 1 for #teamwool. 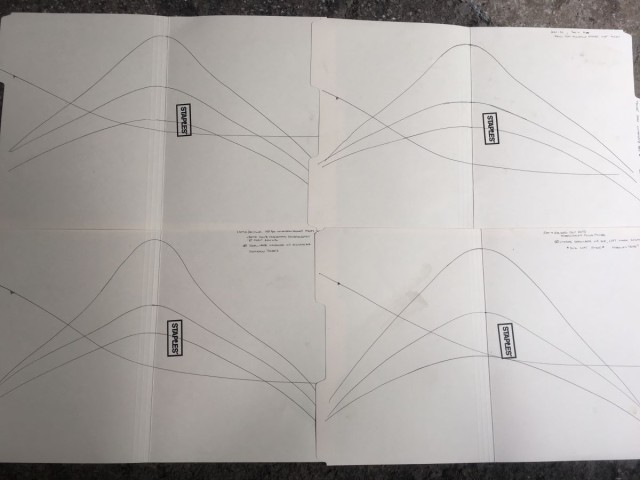 Back tracings were an important part of the process to compare the horses’ different back conformations.

Max and Sky were next up. Max is my 7-yer-old Oldenburg gelding who’s a bit wiggly and lazy, and Sky is my uber sensitive OTTB who aspires to rival Laura Grave’s horse, Verdades, in extreme sensitivity to anything and everything possible. (Sky’s been on Prozac. He’s that neurotic. Really.)

Max started in the foam saddle, like normal. Pokey but happy to work. Needing a little crop, but he walked, trotted and cantered easily. We then went to Kristen’s favorite County Innovation, and he immediately moved off her leg into the canter — much to her surprise! No crop necessary. She then tried him in the County Solution and got even more forward (prepared with a proper half halt this time). I hopped on in the Solution, and not only was he more forward than usual, he was also less wiggly. Interesting. Score 2 for #teamwool.

And then there was Sky … because of his sensitive nature, I was the only one to ride him. Two and a half years prior, he damaged both hind suspensories in a pasture accident, and he’s since returned to hunter pacing sound and strong but I’ve been unsuccessful in getting him sound in the ring. Multiple veterinarian opinions, ultrasounds, and all sorts of tests, and nothing showed other than it was all in his head (as far as we could tell).

I got on, and got our usual, choppy trot, as expected. I warned Allison that this may be an exercise in futility as he’s just special. Tried the County Solution since we knew he was high withered, but very broad shouldered and we knew that tree would likely be better than the Innovation since he’d be sensitive to the flared ends and tree shape of the latter. First tried a medium tree with a Mattes pad and we went forward! However, we also bucked every single stride in a circle twice around the ring … still, progress in that he hasn’t bucked in the ring in two years so this was more “enthusiasm” than I’d see in a long time. 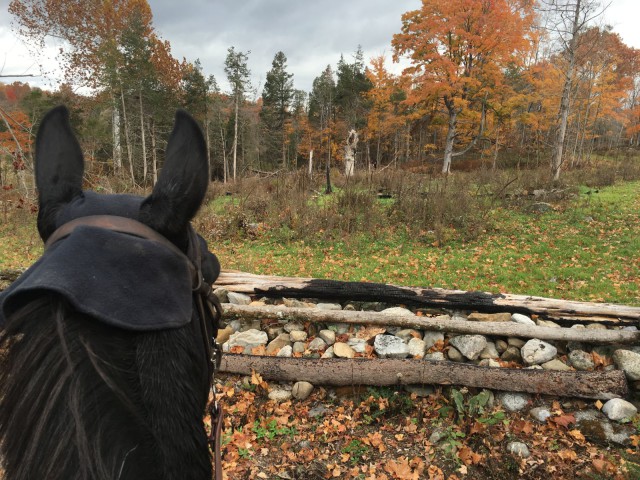 Sky was only happy out in the field, jumping things like this …b ut the ring was a no go. Until today.

Switched to a County Solution narrow tree and DING DING DING! We have a winner! I was speechless (and that’s rare!). Kristen was floored and said he looked like “the old Sky, the way he used to move before he was injured.” Allison smiled.

Sky dropped his head and stretched, we trotted and cantered in our long-forgotten soft stretchy stride that had recently only been reserved for forward gallops in the hunt field. Gone was the short, choppy, uncomfortable mover.

Well I’ll be … turns out it wasn’t his suspensories (or anticipation of re-injuring them) that caused the choppy gait in the ring after all. It was my saddle. Apparently the adrenaline out in the hunt field was enough to have him focus on the jumps at hand and ignore the back pain and just keep going, jumping beautifully and always just needing a chiropractor after every hunter pace. I now definitely had a much happier horse, and a much better fitting saddle — and all this without the flocking adjusted to him.

And the final kicker was after all of this, we trekked to Kristen’s barn and repeated the exercise on her young Oldenburg. Check out the videos below of her and her horse, first in her French foam panel saddle, then in a wool flocked saddle (he did best in the County Innovation narrow tree), and we even had her trainer Brian hop on (sorry Brian was too tall and we didn’t have a saddle that fit him correctly, but it fit the horse) with even better results. Just WOW!

A huge thanks to Kristen and her trainer, Brian, in being our video subjects so that we could get multiple views with a novice amateur rider as well as her trainer on a green developing horse. 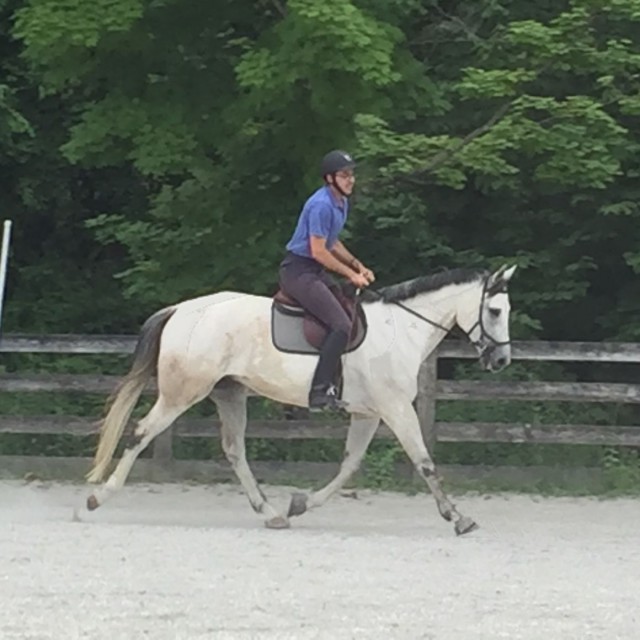 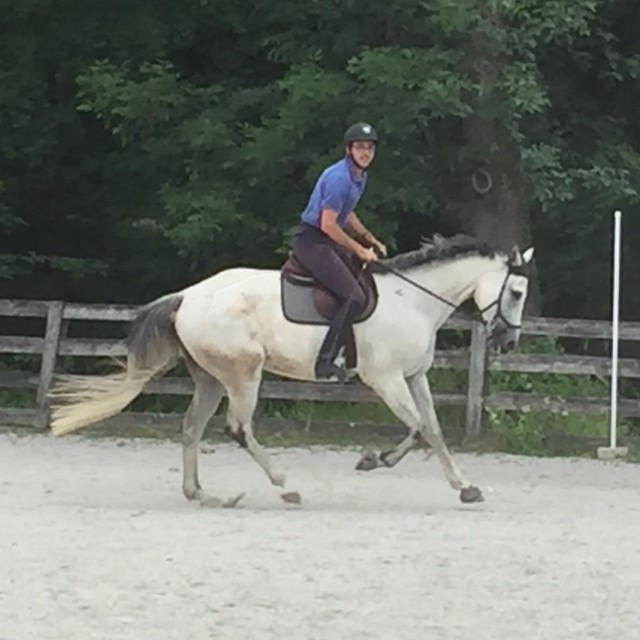 We didn’t finish until 7:30 p.m., it was a really long day, but we learned a ton. It turned out that one saddle wouldn’t work for my crew. But two saddles likely would, in the two different tree sizes my guys needed. With twice yearly flocking adjustments, which were far less than I thought ($100 to $200 on average), I could have horses that moved better and were happier, and not need a custom saddle for every single horse.

Allison and the County Saddlery team were nice enough to leave me with 2 saddles to continue to ride in and even test out on a hunter pace, and we focused next on figuring out what would fit my leg — I may need a high forward flap because I am just *that* awkward in the femur — and what Tyler really needed. But more updates on that coming soon, including what the chiropractor had to say about the saddle fit and my boys … 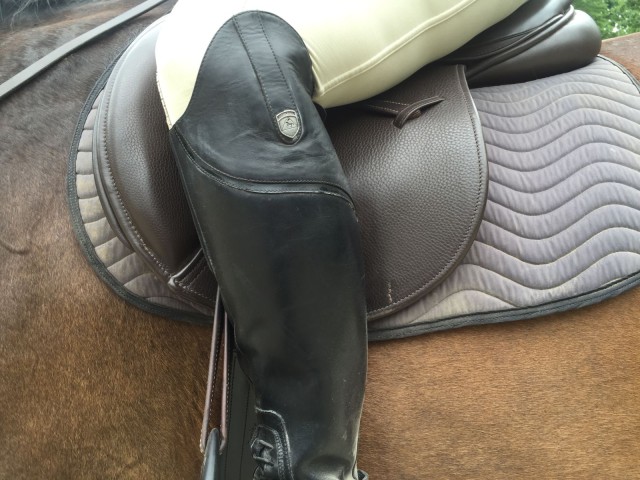