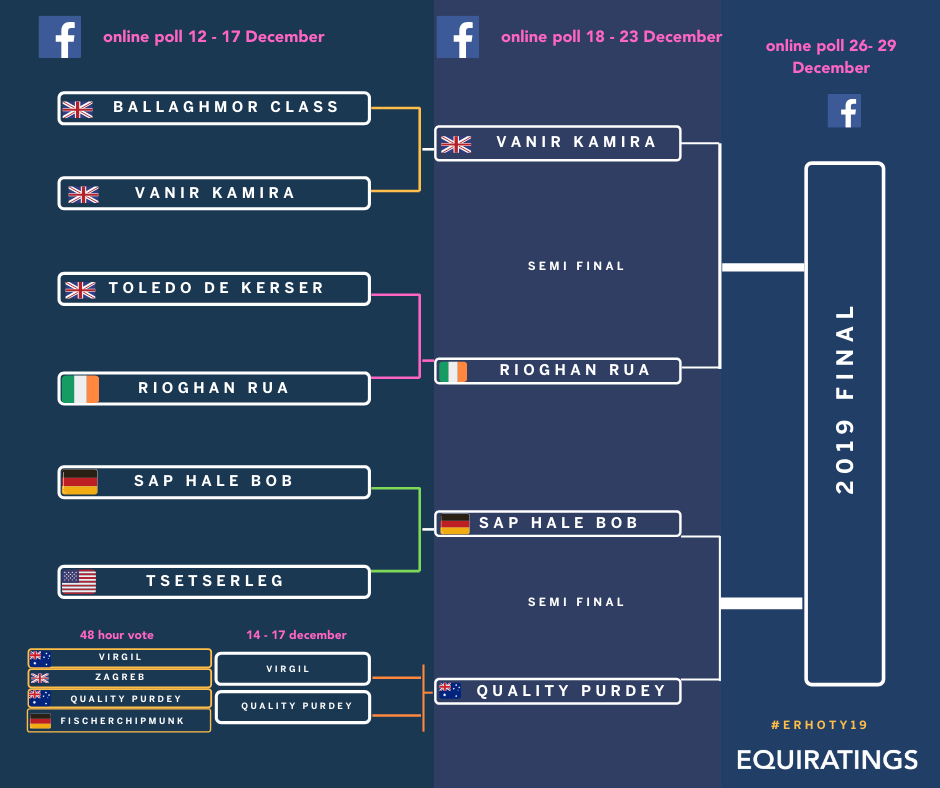 In the eventing world, the off season also happens to be our award season, and that means it’s time for the 5th annual EquiRatings Horse of the Year contest.

Sadly, hometown hero and domestic heartthrob Tsetserleg did not make it through the first round, falling short to the formidable SAP Hale Bob, but there are four quality horses who need your help for this accolade. Let’s meet the candidates.

Quality Purdey: A 13-year-old Oldenburg mare (Quality x Lara) owned by Dom and Claire Poole and Bek Burton. Riding under the Australian flag with Chris Burton, Quality Purdey finished second in the Pau CCI5*-L and third at Aachen CCIO4*-S over the summer.

Rioghan Rua: A 12-year-old Irish Sport Horse mare (Jack of Diamonds x Highland Destiny) owned by Frank and Margaret Kinsella. The Irish are pulling hard for this mare, piloted by 22-year-old Cathal Daniels. They impressively won the Bramham CCIU254*-L before claiming a podium spot in third at the European Championships. If they continue this will be the first Irish horse to make the #ERHOTY final.

The semifinals end this weekend. You can cast your vote by clicking on the photo of your preferred horse in the posts below. Need some help choosing your pick? Tune into the #ERHOTY19 Eventing Podcast at this link.

Posted by EquiRatings on Wednesday, December 18, 2019

You can love and admire them both…but only one can go to the final. Will it be Piggy French to defend the title for GB…

Posted by EquiRatings on Wednesday, December 18, 2019