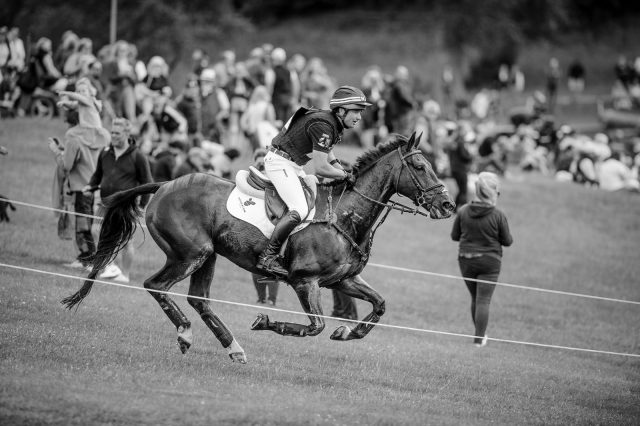 James Avery and One of a Kind II navigate Bramham’s hills. Photo by Tilly Berendt.

It hasn’t, arguably, been the most straightforward weekend at Bramham International Horse Trials. Two fatalities were recorded through Saturday’s cross-country day: Allie Knowles‘s Ms. Poppins was euthanised after sustaining an injury while travelling late in the course, while Toshiyuki Tanaka‘s Ventura de la Chaule JRA was also euthanised after falling at the second element of fence 7AB, which was ultimately removed from the course after three incidents. Two riders, France’s Stanislas de Zuchowicz and under-25 competitor Ailsa Wates, were also admitted to hospital overnight for observation, though Stanislas has since been discharged and Ailsa is reported to be “feeling well”.

We caught up with course designer Ian Stark on Sunday to reflect on the day’s highs and lows.

“It’s always a nightmare when horses are injured, and nobody wants that,” he says. “Three people fell off at the one fence, so we had no choice but to take it out — it was disappointing that we had to do that, and the riders, to be honest, were hugely supportive afterwards. They’ve been pulling me aside left, right, and centre. At one point yesterday, I was just about to walk away from the sport; you put your heart and soul and life and everything into it, and when something goes wrong with that, it’s a bit of a punch in the guts. You just begin to wonder, ‘why am I doing it?’ But then the riders come and say ‘please don’t change it; please keep the standard’.”

Bramham is renowned worldwide for being arguably the biggest, boldest, and most terrain-heavy four-star competition, and one which riders use not just as a goal event in and of itself, but as necessary education, progression and preparation for the five-star level. But just as riders argue they need a Bramham-style course to prepare for the likes of Burghley, they also need appropriate stepping stones on the way there, too.

“I think the sport’s got a lot to think about at the moment, and I’m not the right person to say one way or the other what way we should go, but I think it needs to be standardised,” Ian continues. “We need to try to make sure that horses and riders are ready for the level. A lot of them [this week] were very ready — there was some great riding yesterday, and some fabulous horses out there, but there were also definitely one or two horses and riders that weren’t ready, in my opinion.”

“As a course designer, I now have to figure out if it’s my job to dumb it down to make it acceptable for that level, or if we expect them to get better and move up the levels. I don’t know the answer to that; I think these are all question marks, and I’ll go and think about things. Some very, very important people and riders in the sport have come to me and asked me not to give up and not to back down — but that’s easier said than done. I’m not sure I’m tough enough.”

One of the factors that Ian’s been considering while reflecting on Bramham — and on the sport as a whole this spring — is ensuring riders know the difference between being qualified and actually being ready, and planning their seasons accordingly. Part of that, he says, is working on creating a greater distinction and progression between the national, international short-format, and international long format competitions at each level.

“My general feeling is that there’s quite a few events that people need to do to qualify, but they’re not necessarily getting the education for the proper four-star and five-star level. I’m not blaming the events, necessarily — riders also have to think about which events they’re going to go to to prepare for the three-day events. If riders are chasing MERs, they want to go to these events to get their qualifications, but being qualified doesn’t mean they’re ready. But I don’t know whether we should be getting [designers] to ask a little bit more and get a little bit tougher, or whether I need to back off and get down to their level — but that’s dumbing the sport down again, and I’m anti that. I’ve always been anti that.”

“It’s all got to be discussed and thrashed out. I don’t want to be out on a limb giving tough tracks if everybody else is going to be doing something different, because then that’s not fair on anybody, so I don’t know what the answer is to that. I’m just trying to look at it openly from both sides. Everybody said that if they jump around here, they’re going to be ready for Burghley, and that’s great. But what direction to go in? I don’t know.” 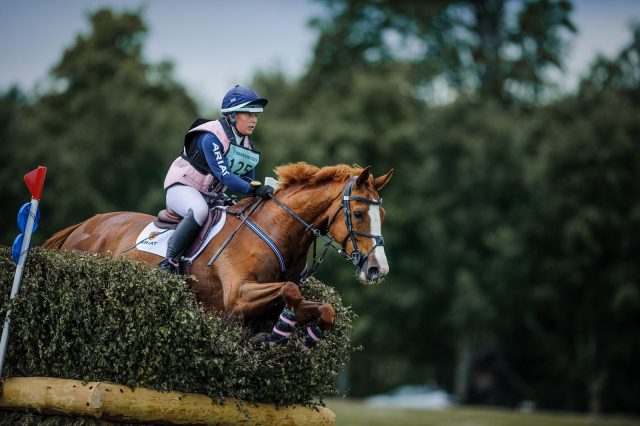 Heidi Coy and Halenza, who finished third in the under-25 CCI4*-L. Photo by Tilly Berendt.

While there was plenty of drama in the feature CCI4*-L class, the under-25 CCI4*-L, which ran over the same course and to the same optimum time, saw far fewer issues –- and had very nearly the same number of clears inside the time, despite a much smaller field of entries. Six of the 21 under-25s achieved this feat; in comparison, just seven of the 62 senior CCI4*-L started managed it. For Ian, who wants to emphasise education — and classic cross-country riding — in his courses, this is enormously heartening.

“[The under-25s] were brilliant; they’re talented young riders on talented horses. Maybe we need to get tougher on qualifications, but these riders got out there and got on with the job, and that’s kind of what I want to see — I want to see people react and ride cross-country. I don’t want to see trained riders who are used to riding on all-weather surfaces, and we’re in danger of getting along that line. I know we all want to look good out there, and we want good pictures, but it’s not all about having the nice picture to put on your mantelpiece. It’s a tough sport, it always has been, and it’s a risky sport. We all know that, and nobody wants to see horses or riders injured, but on the other hand, because I’m an old has-been, I want people to enjoy what I’ve enjoyed about the sport. That’s why I give them courses like this — because what I loved to do was ride that.”

In 2019, the event’s last renewal, the numbers in the under-25 class looked considerably different: 26 competitors started the cross-country, but just five came home without jumping penalties. 2018 saw a more successful Saturday: 27 under-25s left the start box, and 12 of those recorded clear rounds.

“It was interesting for me, because the first time I designed here [in 2009], the young riders’ class was a disaster. There was a group of them that came to me on the Sunday and they said, ‘we don’t know how to ride your course, but we will learn.’ I feel that they’ve been true to their word: they’ve risen to the challenge. Maybe that’s something to do with age and bravado, or maybe the rest of us are comfortable at a level.”

That ongoing education continues to play out, year on year. In 2019 we saw the coffin complex exert considerable influence throughout both long-format sections, largely because riders came in at too high a velocity. At the time, he told us that he was adamant about keeping the coffin in the course, because riders needed to put the time into learning to ride them properly and add them into their training regime — and this year, we saw the question answered consistently and correctly across the board.

“They’re learning, and if I’m honest, I gave them a fraction more room in the coffin and lowered the rail a couple of inches going in, because I thought, ‘they haven’t necessarily had coffins of that technical difficulty since 2019’,” he says. “Both in the long and the short, I thought people rode it really well, so they’re learning coffin canters, which is fantastic — hallelujah! But there’s still a lot to learn about riding lines and reacting. [Cross-country riding] is all about the reactions: we can all sit on a brilliant horse and steer them around there, but you’ve got to be ready as a rider to react quickly if the horse needs a bit of leg or a little bit of assistance.” 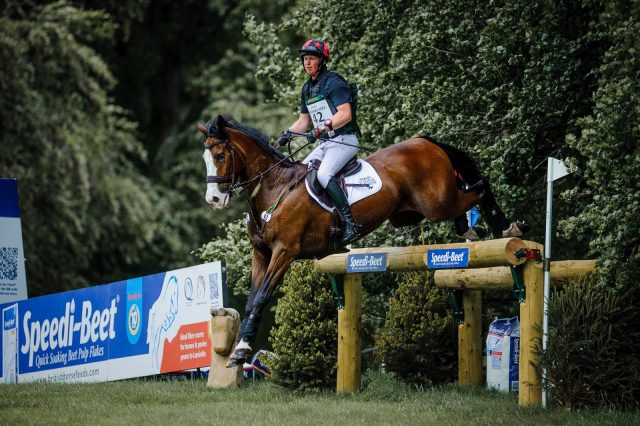 Matthew Heath and Askari jump around the CCI4*-L track. Photo by Tilly Berendt.

In our various conversations with riders, all were effusive in their praise of Ian’s Bramham track — a level of support that was bolstered by the event’s officials, who have to sign off the track before it can be used.

“There was no complaints about the course here,” says Ian. “At the riders’ briefing on Friday night there wasn’t a word from the riders — they were all happy to get out there and do it. The technical delegates said they’d never been to an event that had so few comments or negativity from anyone, so the ground jury were happy.”

Every event is an opportunity for development, though, particularly major ones and events like this, or like Badminton last month, where not everything goes quite to plan.

“I just need to go away and think a little bit more about the whole thing, because if the answer is that I need to make things a bit easier, what I have to have straight in my own head is whether I’m comfortable doing that and helping the sport be dumbed down. And I don’t know whether I am. That’s not arrogance, it’s not me being difficult — it’s just how I am. I’ve always been a very competitive person, and I want everyone to strive to be better. Maybe that’s unrealistic.”

“This day has just made me question myself, but it’s also my opinion just looking at the sport as a whole. I think we need to steer in a direction that’s right for the sport, and right for the riders. I’ve always been against us old farts dictating what the younger riders should have. I never liked it when I was a rider and the old bodies used to tell us what they wanted; I didn’t like it when they got rid of the steeplechase and roads and tracks; I didn’t like it when they got rid of all the weights. I’m sort of an old-fashioned traditionalist. But it’s the overall sport: I’m seeing a gentle dumbing down. Things evolve, we move on, and if that’s not right for an individual — ie., me — then it’s time for me to move on. But on the other hand, if people want what I’m doing… don’t get me wrong, I love it, but I’m not as tough as I pretend and it’s quite a sensitive issue when you put your heart and soul into and things go wrong. And they inevitably do. It feels like I have to a serious look at myself, as well as the sport, and then I have to move forward. And I will — I’ll get over it, but I want feedback to know which direction to go.”

He pauses. “I feel vulnerable, and I think the sport’s vulnerable,” he says, finally.