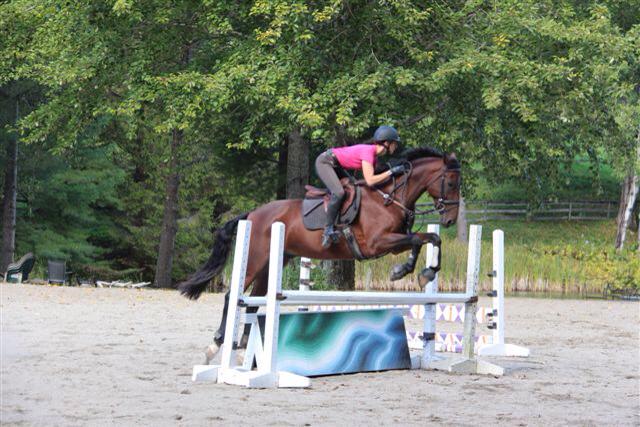 Last weekend my friend and I decided to go to an indoor jumper show at Stoneleigh-Burnham, in Greenfield MA. I’ve taken Mr T to two schooling events last fall, in addition to two indoor jumper shows this winter.

Stoneleigh would be our third jumper show together and I naively assumed he would react similarly to our previous outings. One crucial lesson this horse has taught me: never make assumptions or sweeping generalizations about any horse until you truly know that horse like the back of your hand, and even then, give your horse the benefit of the doubt. I take these lessons extremely seriously, and am grateful to continue my education.

So there I was warming up in Stoneleigh’s smaller indoor and all seemed well in the world. I knew Mr T was slightly on edge, but gave him plenty of time to settle into the seemingly foreign atmosphere with lots of encouragement. In fact, I am not sure if I’ve ever ridden a horse that responds so quickly and positively from praise, and human contact.

Although I am clueless about what life is like raising a teenage boy, I often equate Mr T’s personality to that of an arrogant teenage male who wants nothing to do with his mother, but surreptitiously wants his mom to be around helping him through life’s more challenging moments.

From the smaller indoor, competitors headed towards a narrower “waiting area” before entering the ring. I sat there, semi-loose reins, relaxed body and mind and when our number was called, we entered the ring.

Although I was unable to actually enter the ring. Some major switch turned on or off inside T’s brain and the idea of entering the ring triggered some insecure memories I am assuming. He went from nervous to defiant in a matter of seconds.

Ten years ago I would have been clueless in this situation and therefore, terrified and or irrationally upset. However, I’ve been riding long enough now to know that most horses are not evil menaces waiting or hoping to destroy your life and end your career.

“Mean,” or “nasty,” or “defiant,” horses are reacting out of fear. Fear will continue to act as the base, and whatever issues we run into after fear resides is simply the aftermath from that original trepidation.

In order for me to deal with this horse, or any horse I have to become a detective. I must figure out what makes this particular horse so nervous, and then devise a plan that will ensure comfort and confidence. This should go without saying, but this process will not occur overnight! 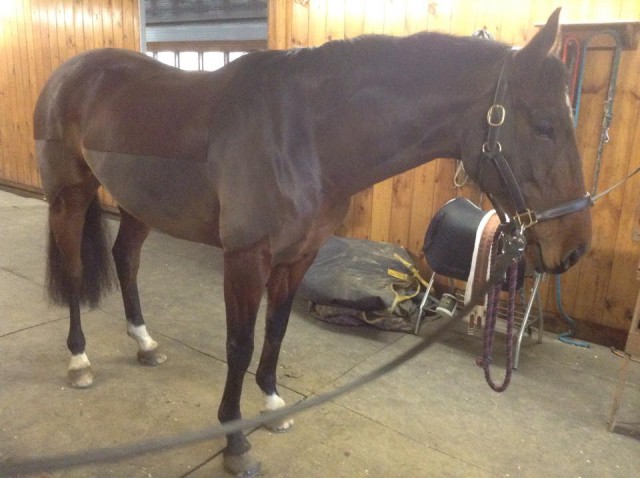 I finally managed to get Mr T into the ring, but he was on such a high alert, that every jump, and everything inside that building was instantaneously terrifying. By that time, I had no intentions of jumping a round, I wanted to give him time to see everything and understand that his life was not in imminent jeopardy.

I never hit him with my crop and got into any sort of fight. I felt he was so on edge, and his acting out, bucking, leaping, spinning was all steaming from fear. Why would anyone want to “beat” a horse during a time like this is beyond me?

I did encourage him with my leg and talked to him, as his heart was pounding noticeably through his chest. If I had fought with him, I am 100% positive, he would have fought harder, lost trust in me, and shut down even more.

All the volunteers and organizers were incredibly patient and encouraging, giving us the time we so clearly needed. They said I could keep trying as the classes continued, or I could school the course at the end of the day, which was very generous of them!

At that point, I had no idea where the rest of the day was headed, but I was going to continue to get him in and out of the ring in a non-confrontational fashion in order to get him feeling more confident.

He was not afraid of the jumps and he certainly does not have a jumping problem, he has a confidence problem and has trouble trusting. He has been all over the world, and in eight short years has had at least five different riders, which I’m sure has contributed to his deceiving lack in confidence, which is nobody’s fault, but rather an unfortunate situation for the horse.

We returned to the warm up and I meandered around, and then jumped some stuff. Took some time to let him chill out and did a lot of transitions, especially halting, as I needed to lower his rpm’s and wait for that sigh/deep breath of relief.

When I first started riding Mr T I actually had a lot of trouble just having him halt. At times, he would feel like a nuclear explosion was near, even though he usually did nothing … you could feel the buildup of fear. Hence, when things get spiraling, sometimes just stopping, and resting my hands on his withers and taking a deep breath helps tremendously. 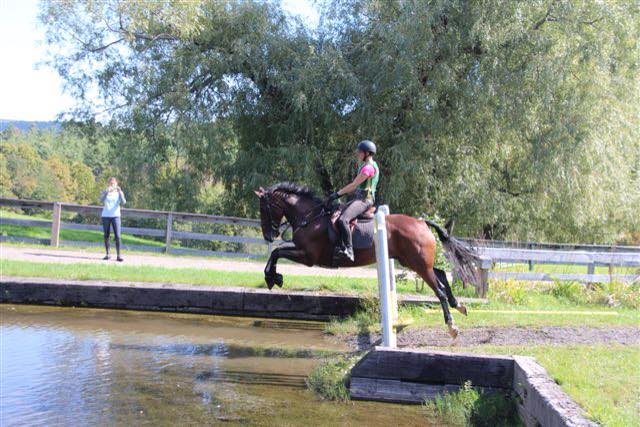 The next time I entered the ring, I had my friend lead us inside and she stayed with us until I gave her a thumbs up. From that moment on, things got increasingly better and better. We ended up jumping four rounds and sort of last minute decided we would take a crack at the 3’9” class and he jumped around spectacularly, and without touching a rail!

I wasn’t planning on jumping this round, but then again, I wasn’t planning on not being able to get my horse into the ring. I was reacting to the horse beneath me, and letting him tell me what he was able to do. He felt so confident by the end of the day and so proud of himself. I was impressed with where we started and where we ended up and how much I keep learning about this horse.

It’s so easy to get caught up in all of the amazing moments, and the competitions, and the ribbons. But there are always going to be setbacks, and things unexpected coming our way.

At times I feel like I am making immense progress with this horse, like we have taken five gigantic leaps forward, and then something like this happens, and you almost feel like you are back at square one, or even negative square one. This is what we call horses!

There are constant roller-coaster moments and times where we feel defeated, exhausted, and unsure of how to proceed. It would be so easy to give up and throw in the towel, but seeing something through, committing, learning, and adding to our wealth of knowledge seems far more alluring than finding a new more exciting and shinier project to polish.