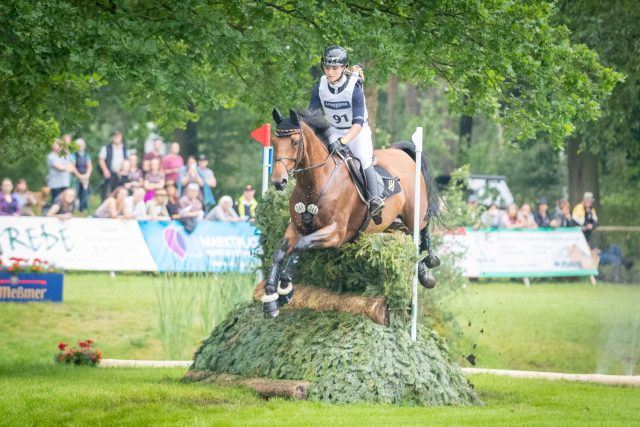 It’s wildly entertaining to see Germany’s eventing heavyweights duking it out at the top of the Luhmühlen CCI4*-S Meßmer Trophy leaderboard, and the cage match continued on the cross country course today. The top two after dressage, Julia Krajewski with Samourai du Thot and Ingrid Klimke with SAP Asha P, refused to budge, while third-placed Michael Jung kept his rank but switched out the horse.

When Luhmühlen got drenched with what EN’s boots-on-the-ground (Wellies, we hope!) reporter Tilly Berendt described as “an epic bucketload of rain,” the CCI4*-S cross country start got pushed back to lunchtime to allow for the floodwaters to get syphoned out by the local fire department.

Michael Jung was first out on course with his previously third-placed mount Creevagh Cooley. The mare, a new ride for Michael, fell at the second element of the #5ABC combination, a corner between two log skinnies. Bionic as ever, Michael went on to pilot his two other rides, Highlighter and Corazon, successfully around the course. A clear, fast round propelled Highlighter from 7th into 3rd; Corazon had 8.8 time penalties to move from 8th to 16th.

“I am super pleased with this young horse,” Michael said of Highlighter, an 8-year-old stallion. “He’s still a little green and I’ve brought him on slowly but today I was able to ride him a little faster to stay within the time and he presented himself beautifully in this difficult course.”

A tenth of a point separate Julia and Ingrid, who remain 1-2 on their dressage scores of 24.7 and 24.8 respectively. By all accounts the footing was no worse for the wear after the morning storms, as Luhmühlen’s ground can apparently take a lot of water and was excellently prepared. But the umbrellas lining the galloping lines did, apparently, take some horses by surprise — including the CCI4*-S leader.

“I know Sam really well and vice versa, which always helps,” Julia said. “At first he glanced at all the umbrellas but quickly focused back on me and the job at hand. He was superb and gave me a fabulous feeling all the way. Luckily he rides so well, which saves a lot of time at the fences.”

Ingrid was over the moon with Asha P’s performance today. “I was thrilled the mare rode so positively all the way round,” she reflected. “She thoroughly enjoyed our round and so did I. The spectators are brilliant and they really carried us round the course. Asha is a super fast horse and she rode just as I thought she would.”

German riders hold the next two leaderboard spots as well. Felix Etzel and Bandit are currently in 4th: “I am so happy we stayed without any jumping penalties in this technical course. Unfortunately, we didn’t quite make the optimum time. Bandit seemed a little taken aback by the atmosphere at first, but his concentration improved throughout the course.”

Rounding out the top five is Dirk Schrade with Unteam de la Cense, who jumped clear with 1.2 time penalties. “The ground was surprisingly good after all that rain we had this morning,” Dirk said. “But the quality of the grounds in Luhmühlen has always been very excellent. My horse was fantastic to ride but for me it was important to finish this course safe and sound.”

Japan’s Yoshiaki Oiwa is 6th with Bart L JRA.“So far my horse has only competed at smaller events last season and we haven’t been a team for long,” Yoshiaki said. “Today he rode amazingly and I could not be more pleased. This horse is quite shy and I thought he might find the atmosphere a little troublesome but he was great!”

As we noted yesterday, Luhmühlen’s CCI4*-S competition might not have top billing but it’s as equally fierce as the CCI5*-L headliner. A German dream team for the 2019 FEI European Championships is clearly under construction … who will we see back at Luhmühlen, which is hosting the Euros, in August? Stay tuned.

You can view the complete CCI4*-S leaderboard here.