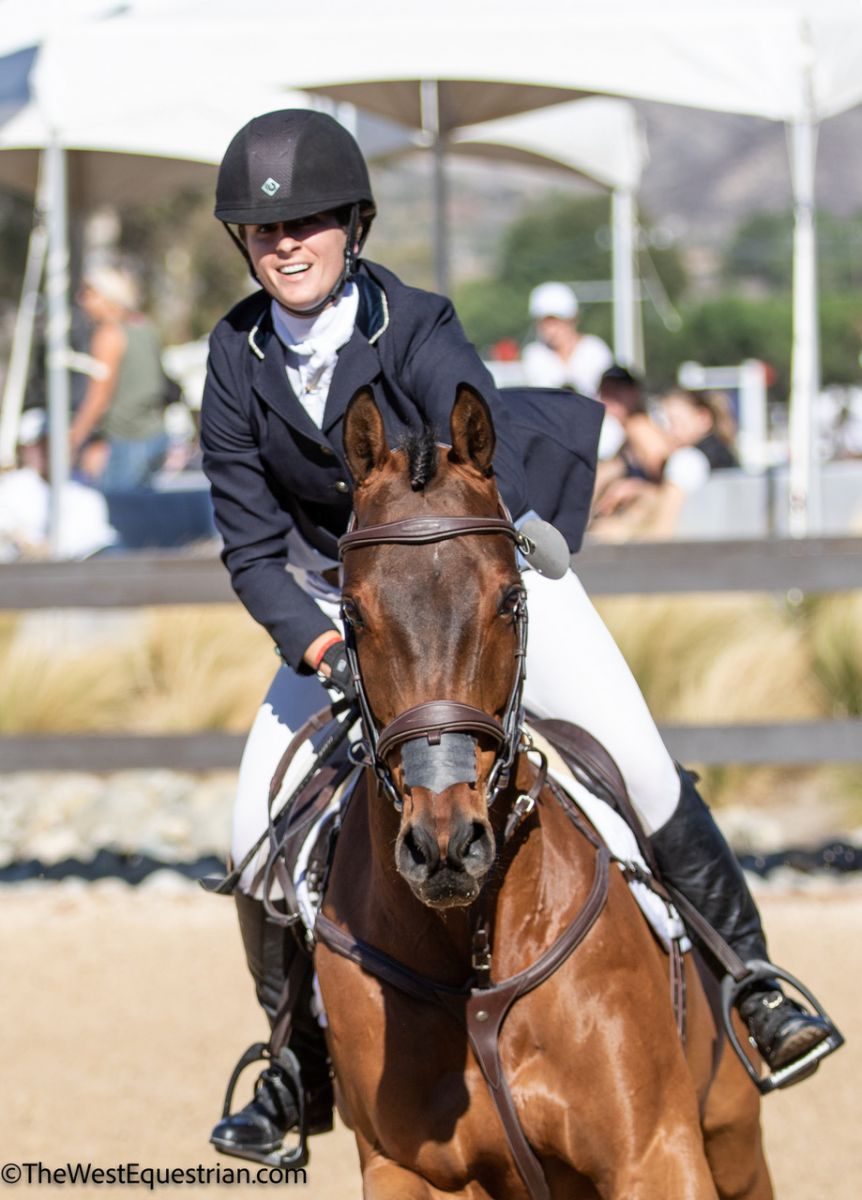 Those are the words of Alex MacLeod, a full-time veterinarian and four-star event rider. When Alex topped the leaderboard at the CCI4*L at Galway Downs last fall, you had probably never heard of her  – but that performance secured her a spot on the shortlist for the 2022 Eventing Development Program.

Everybody does think they’re busy, but none of us are quite as busy as Alex. The Los Angeles-based rider balances work and top sport remarkably well. For example, here’s a typical week in her life: on the days that she’s riding before work, she wakes up at 3:45am so she can get to the barn, ride her horse, and then get to work by 7:30am. On the days that she rides after work, she leaves around 5:30pm to go to the barn and gets home at about 9pm. She tries to take dressage lessons in the evenings with Jane Arrasmith Duggan, and come rain or shine, she rides five days a week.

Finding the Little Horse Who Would Make Dreams Come True

Alex’s 4* winner is Newmarket Jack, a 2009 Irish Sport Horse gelding owned by Alex and her mother, Carla MacLeod. He’s a horse that Alex has produced from the very beginning of his eventing career.

After graduating from Princeton, she knew there was a possibility of horses being in the picture.

“I wanted to give it a shot, to see how I felt about it,” she says.

During college she had been a working student for Phillip Dutton and rode through the intermediate level, and her horse at the time was ready to step down from the upper levels, so Alex began looking for another one. She was looking for “a going horse, not a green one.” But as horse shopping sometimes goes, you get what you fall in love with, not what you were actually looking for.

Alex’s mother, Carla, is Spanish, so they go to Spain every year to see family. Right after graduation, Alex went to Spain and then on the same trip hopped over to England and Ireland to look at horses, as she’d been looking at horses in the U.S. for a while but hadn’t found anything suitable.

It was in Ireland that Alex met Jack. He was five years old at the time, and according to Alex, jumped with “the best instincts in the world.” He was fairly small, only about 15.3hh, but he gave Alex a great feeling, and after she tried him, she couldn’t get him out of her head. She sent some videos to Phillip, and he approved. Then, the fun began. 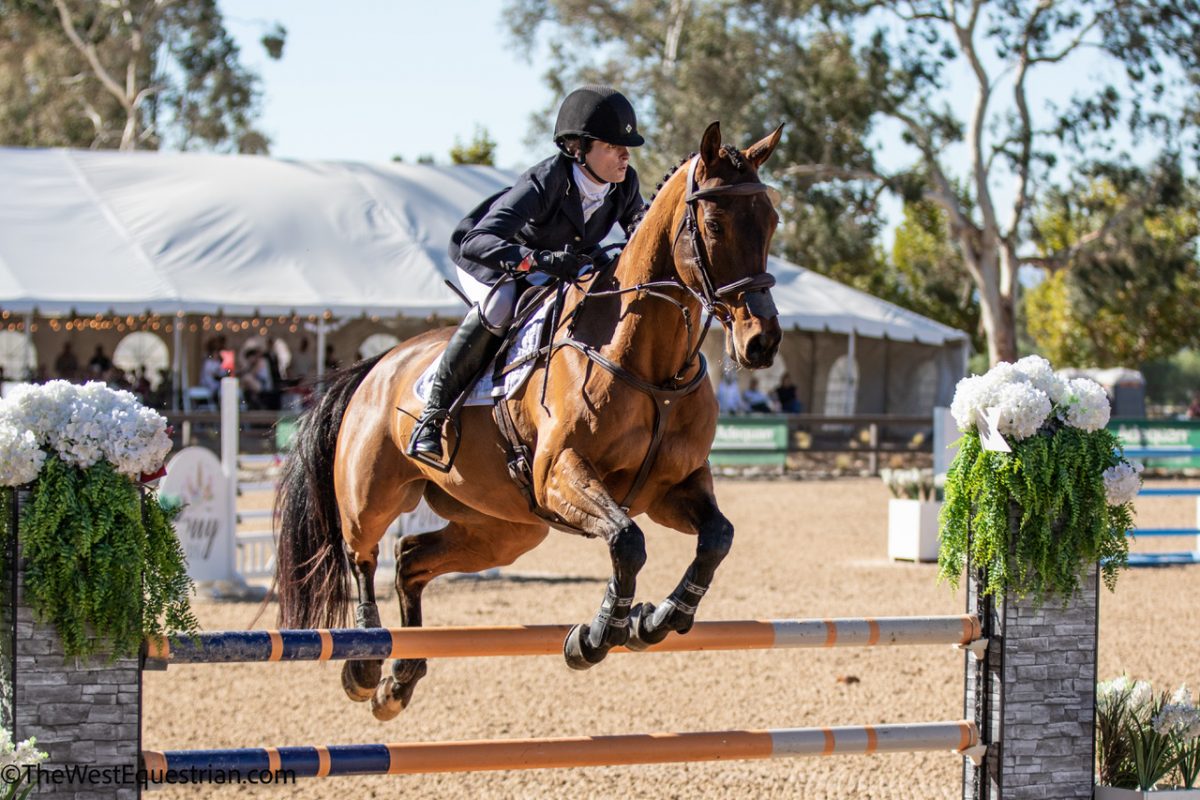 “He was horrible,” says Alex, reflecting on the early years with Jack. The gelding was difficult to load on the trailer and wild under saddle, and quickly became notorious for his naughty behavior at Phillip’s barn. Alex explains, “It’s always busy in Phillip’s indoor arena, but when I went in on Jack, everyone would clear out. No one wanted to be in our path!” People knew to steer clear of her opinionated youngster, whom she confesses had virtually “no steering, so we really needed the walls of the indoor to stop.” He also would often go up when she asked him to connect to the contact.

Tricky was to be an understatement, and that five year-old year was particularly difficult. Jack was in the habit of bolting to and from the jumps, so Phillip told Alex not to jump the horse until he had better flatwork. Phillip went away for a couple of months to a championship, and upon returning he assessed the horse again. Jack promptly bucked him off.

But as most good horses do, Jack turned a corner the next winter, when he was turning six years old. The flatwork began to come along, and his mental game was now more on Alex’s side. Because he was such a natural jumper, he easily went preliminary in his six-year-old year. 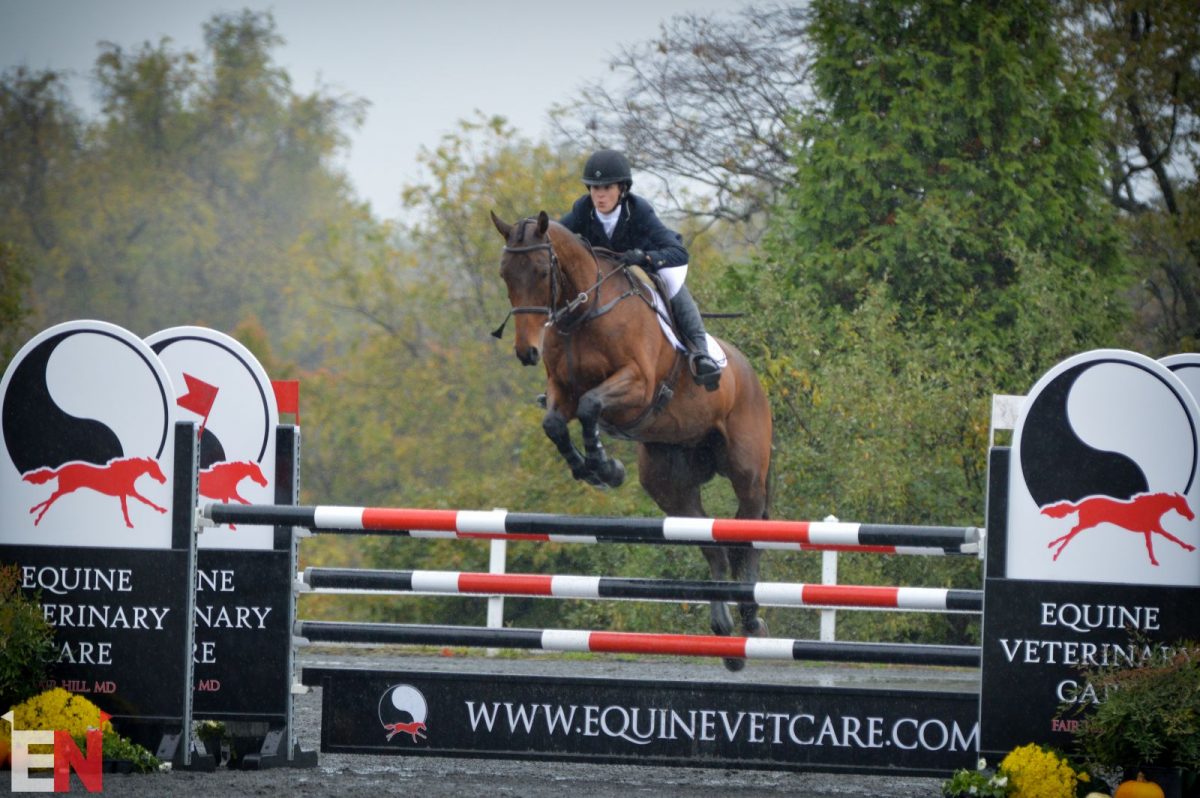 The pair kept ticking along, and moved up to Advanced when Jack was nine years old. But Alex had a few other things going on when she was moving up to the Advanced level for the first time: she was attending vet school at the University of Pennsylvania.

Alex started at Penn when Jack was going intermediate. She recalls that it was “really hard mentally – I thought that I would be okay because I went to a good college, so I would be well-prepared. But I was not.” She had to memorize a complete textbook within a month, including the full anatomy of different species of animals. Her first year was made even harder when Jack had a bad colic scare and Alex tore a ligament in her foot so she couldn’t ride with stirrups for several months.

According to Alex, “the second year of vet school is the worst year.” She had exams every week. The workload was nearly unmanageable: she had textbooks to memorize and so many species of animals to learn about. But she also had a special little horse to train.

Halfway through vet school, Alex moved Jack to the barn of Dan and Kaitlin Clasing who were, at the time, based in Pennsylvania. Alex was working at New Bolton Center, which was conveniently right across the street from their barn. She describes Dan as “very scholarly about the whole thing. He studies riding in ways that most people don’t.” As an intellectual person herself, Alex appreciated Dan’s approach to the sport. She was studying to be a vet, but she was also studying to be a successful rider at the top level – and she moved up to the four-star level under Dan’s tutelage.

With all these balls to juggle, you might be surprised to learn that Alex describes herself as a “chronic procrastinator.” So how did she manage her time effectively? She’s a creative planner and crucially, she’s not afraid to ask for help. She’s also brave about making scheduling requests to event organizers – for instance, in vet school she would ask to ride on Thursday if she had an exam on Friday.

One story she tells encapsulates the juggling quite well: at the end of her second year of vet school, she was required to do a practical horse handling exam. The exam included ‘very basic horse handling,’ so the irony was not lost on Alex that she could have done it with her eyes closed. Still, it was a requirement. The problem was that the exam was during the trot-up at Jersey Fresh, and it was a few hours’ drive away. She drove Jack to Jersey Fresh early that morning, braided him, and then had a friend trot him up for her while she took the exam.

Working As a Vet While Going Four-Star

If vet school was busy, Alex’s schedule as an intern has been even more intense. Part of being a medical professional is working emergencies, and being on-call brings special challenges to riding. Alex’s first equine internship, at Fairfield Equine in Connecticut, required her to be on-call for the first 90 days.

“The thing about being on-call,” Alex explains, “was that I had to be to the hospital within 20 minutes. My horse was 12 minutes from work, so if I got paged, I had 8 minutes to put him away and get in the car to get to the emergency. Needless to say, some of our trot sets turned into canter sets if I needed to make it back to the barn quickly.” She also couldn’t go off the property with her horse during that time. But she kept training, and kept the horse fit. When circumstances allowed it, she knew she wanted to be ready to compete.

Luckily for Alex, the internship had a satellite practice in Wellington, Florida, during the winter. She spent six weeks there, and brought Jack with her, so they were able to get a good start for the year. She successfully competed him at the Jersey Fresh four-star later that spring. Then, in July of last year, she moved to California to start a job at a small animal emergency hospital in LA called VCA Animal Specialty & Emergency Center. There, she does exclusively imaging, which is a crucial step on her path to becoming a radiologist. 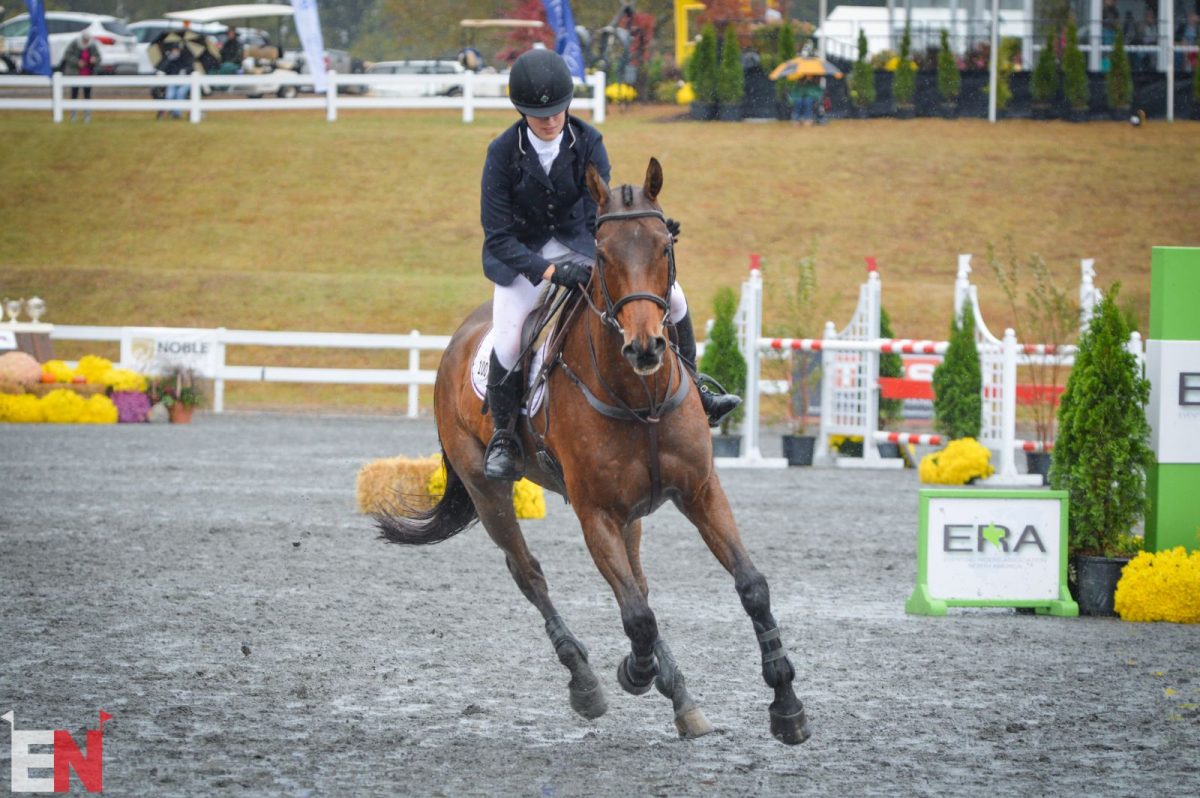 “You Just Make It Happen”

One challenge of being a young veterinarian is having to gain experience from different jobs, which often requires moving around. Alex says that “every time I change my job and start something new, I think I won’t be able ride.” But she makes it happen. She finds a barn, figures out a commuting schedule, and keeps training her horse.

“You can’t change the hours of the day,” Alex says, but you can change how you spend them. “I don’t know, maybe I sleep less or just get more efficient at doing things!”However she manages it, Alex is sure to note that she makes room for doing fun things on the weekends, whether it’s going on short trips or enjoying LA. This might mean that she has to do the bulk of her riding during the week days.

Because California’s events are almost always spread out over three days, Alex finds it difficult to compete sometimes, as working five days a week means she can’t leave on a Thursday to get to an event on a Friday. Last fall, she used up some of her vacation days for competing, but it’s undeniably tough to make it all work. Her mother, Carla, tries to make it out to the big events when she can to groom and cheer her on, and came out to California for Woodside and Galway last fall.

With a residency on the horizon, Alex is prepared to move again. Her dream is to be a radiologist, which would be ideal because it offers a lot of flexibility. She could work part-time at a hospital and do the rest of her work remotely, thanks to tele-radiology. She would like to have two or three horses eventually, and although she loves competing at a high level, she also loves the process of starting young horses and bringing them along. Whatever she does, she does it well – and as proof, I’ll leave you with a story that encapsulates her grit, drive, and attitude better than any other.

At Galway Downs 4*L last fall, the event Alex and Jack went on to win, Alex missed a turn on the cross country course. She had to make a circle to get back to the correct path, which put her down 20 seconds on the clock. At the four-star level, 20 seconds down is a lot — and it’s very difficult to make up, because of the technicality of the combinations and the high speed you are already traveling.

But as she would, Alex put the pedal down. She gave Jack a squeeze, and they chased down the clock.

They came in under the time. Maybe it was from all the practice of racing from the barn to the hospital in 12 minutes when she was on-call in Connecticut.