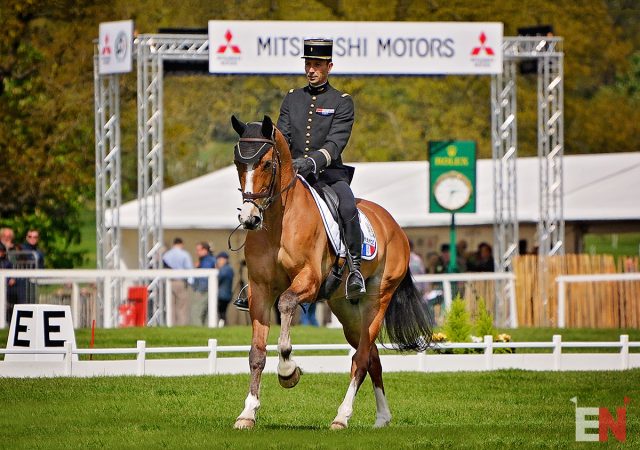 Thibaut Vallette and Qing du Briot EN HN top the standings after the first day of dressage at Badminton, giving us one of two scores so far in the 30s to lead on 38.7. These two have only competed in one four-star together in their 13 international starts as a combination, but they already have a slew of accolades to their name, including team gold at the 2016 Rio Olympic Games and individual and team bronze at the 2015 Blair Europeans.

Qing du Briot ENE HN, a 13-year-old Selle Francais (Eolien II x Henriette) scored 41.0 in his first career four-star test in Rio, and he bested that mark by more than 3 points today. Bettina Hoy and Designer 10, a 13-year-old Westphalian (Dali X x Caesy), scored 39.2 for second place, which didn’t match their score of 34.5 from last year when they finished sixth, but it will still be good enough to send them out of the starting box in a good position come Saturday. 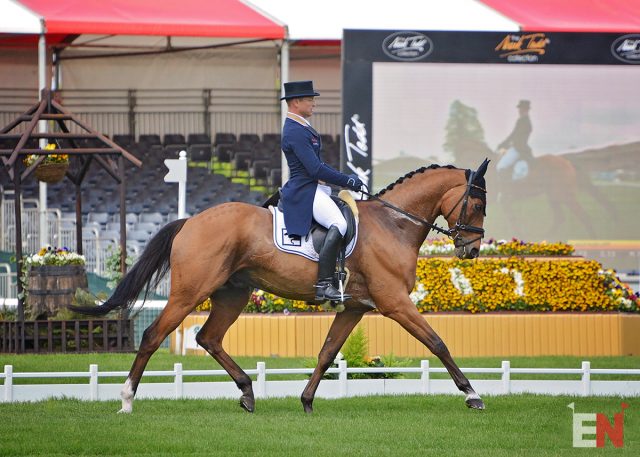 Michael Jung and La Biosthetique Sam FBW, who are looking to become the fifth back-to-back winners at Badminton in the history of the event, scored 40.0 for third place at the end of the first day. Sam, a 17-year-old Baden-Württemberger (Stan the Man XX x Halla) had been averaging a 37.1 in dressage over the past 12 months, according to EquiRatings.

While Michael and Sam’s score today didn’t come close to matching their personal best of 33.0 from the 2010 World Equestrian Games, remember that they battled back from fifth place after dressage at the 2016 Rio Olympic Games to ultimate win back-to-back gold. With Eric Winter’s course living up to expectations as a return to “big and bold,” we are expecting a very influential cross country day with the potential to turn the leaderboard upside down, much like we saw in Rio.

Stay tuned for quotes from Thibaut, Bettina and Michael just as soon as we wrap up the afternoon press conference.

We have two Americans sitting inside the top 15 after dressage. Hannah Sue Burnett and Jacqueline Mars’ Harbour Pilot, a 14-year-old Irish Sport Horse (Cruising x Shannon) are leading the way for Team USA after the first day, scoring 44.9 to sit in equal eighth in their Badminton debut. Read much more about their test and watch a video interview with Hannah in our morning report. 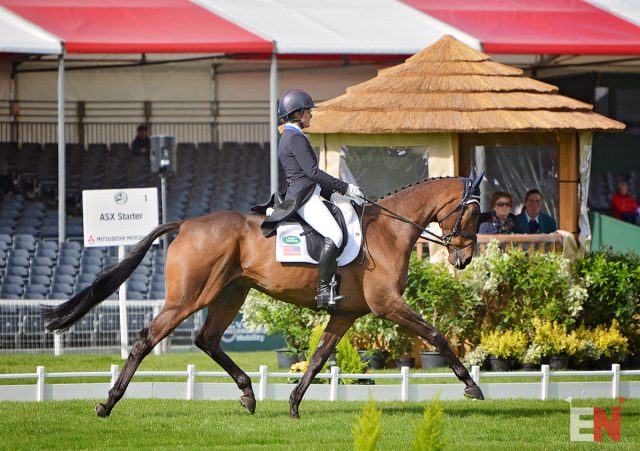 Lynn Symansky and the Donner Syndicate’s Donner scored a personal best of 47.2 in their Badminton debut to sit tied for 14th place. The 14-year-old Thoroughbred (Gorky Park X Smart Jane) left some points on the table when he was late behind with the first two changes in the test, but this is easily the most relaxed I’ve ever seen him in a big atmosphere.

“I usually have to climb my way back from his trot work, but his trot work today was great, and I struggled a little in the canter to keep him fully connected. I think he’s a bit body tired because I’ve had to ride him a lot this week. He’s been quite up,” Lynn said.

“He’s a full Thoroughbred ex-racehorse so sometimes you have to compromise the body a little bit to get the mind working with you, and I think I just lost him a little bit in the changes, but he still tried so hard. I was really happy with him.”

Lynn walked the course yesterday and said she feels confident considering Donner has already jumped around five four-stars without a cross country jumping penalty. “If any course is going to suit him it would be this one where it’s not such a dressage show for sure,” Lynn said. “I’m a little light on runs this year but he’s so experienced that he just needs to get out and school a lot, which I’ve done. He feels prepared.”

Lauren Kieffer also made her Badminton debut today, scoring 50.6 with Jacqueline Mars’ Landmark’s Monte Carlo, an 11-year-old Irish Sport Horse (Formula One x Glamour) to sit in 24th place after dressage. You can read much more about Lauren’s test and watch a video interview in our morning report.

Katherine Coleman and Longwood also made their Badminton debut today, scoring 53.6 to sit in 28th place after dressage. While Katherine and her own Longwood, a 15-year-old Irish Sport Horse (Limmerick X Cavale de Or), have never competed at four-star level together, that is their best score to date and a definite improvement from their 12-month dressage average of 55.3.

“I’m really pleased with him, as dressage is not his strongest phase. Yesterday in the trot-up he was wild and so I was really nervous about how he was going to be in there today in terms of all the atmosphere, and I’m really pleased. He pretty much kept his calm and was paying attention to me the whole time. I think that’s where we’re at for the test at the moment, and he went out there and did the best he can do.” 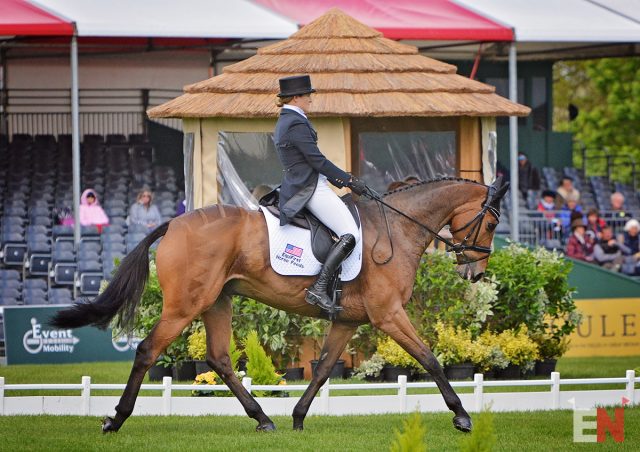 As for what it means to Katherine to compete at Badminton, she was in tears when she said how much it means to her to have so many people here supporting her. “We as riders are here together but it’s all about the people that get us here, because they’re here at 6 o’clock in the morning, 7 o’clock at night on a Sunday; they’re there. It’s the vets, the farriers, the physios … everyone just comes together to get you here. It’s amazing.” We couldn’t agree more!

Looking ahead to tomorrow, there are several other contenders with the potential to best Thibaut and Qing du Briot’s score in dressage. Ingrid Klimke and Horseware Hale Bob, who finished second at Badminton in 2015, are chasing their four-star personal best of 39.3. According to EquiRatings, over the last 12 months, Horseware Hale Bob has averaged 34.4 in dressage.

Others to watch are Andrew Nicholson and Nereo, Karin Donckers and Fletcha van’t Verahof, Chris Burton and Graf Liberty, Mark Todd and NZB Campino, and Jonty Evans and Cooley Rorkes Drift. Of these combinations, Andrew and Nereo are the only other pair aside from Ingrid and Horseware Hale Bob averaging in the 30s over the past 12 months (36.4).

If you’re noticing a lot of numbers in EN’s reports from Badminton it’s because we are teaming up with EquiRatings to bring you exclusive data and content. For MUCH more, be sure to follow them on Twitter @EquiRatings and also check out the daily video updates on Facebook.

We have three more North American combinations still to come on Friday:

Badminton is streaming all the action live, as well as posting videos for on-demand viewing. We’re posting the live stream and the on-demand videos at this link, so be sure to tune in tomorrow. Many thanks for following along with EN! Go Eventing.