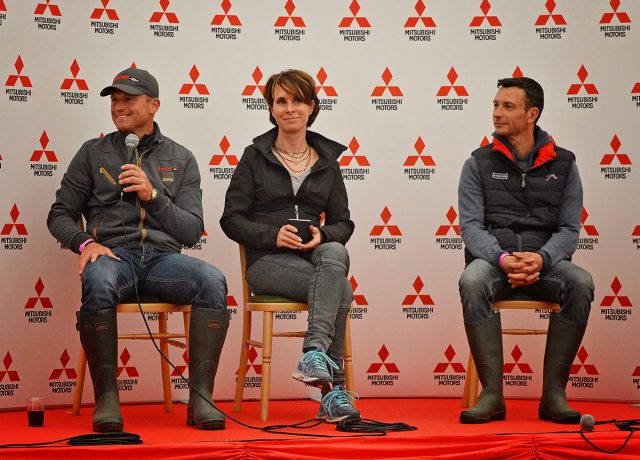 What did the top three have to say after the first day of dressage at the Mitsubishi Motors Badminton Horse Trials? Read on!

Michael Jung on riding in back to back four-stars: “It’s a lot to organise but it’s not difficult. It’s a new motivation and it’s nice that you have many, many nice horses and that you can compete in these big competitions.”

Michael on the cross country course: “I think it’s a very tough course and you have to be very concentrate from the beginning to the finish, and that your horse have enough energy to the end. They are very big fences, very upright, nearly every fence at the end and a lot of questions come directly with not a fence in between where you can give the horse a new motivation if you have some problems, you have to be very concentrate always.”

Michael’s preparations this year compared to years past: “It was nearly the same, we just missed one competition in Fontainebleu which was cancelled, so we had just one competition. But he has a lot of experience and he feels very good. He gives me a very good feeling the last couple of weeks and months so it changed not so much.”

Who rode La Biosthetique Sam while Michael was winning in Kentucky? “The same people like always when I’m in a competition. For example like, Isabel, or Pietro … different peoples who are working in my stables for riding the horses.”

Bettina Hoy’s thoughts on cross country: “I think Eric has built a very clever course, like as Michael said, I think you need to be extremely concentrated as a rider and I think you need to have an extremely good jumper underneath you because there’s basically just one big question after another and not many fences where they can get their breath back. Especially the last part, from the Dew Pond onwards it literally goes uphill so when you come to the two gates at the end you still want to have something left in the tanks so they can pick up and produce a nice jump.

“It’s tough with all this intensity in the middle and uphill at the end, I think the time will be tough. Eric has been very clever in building a lot of fences that you have to turn in to so that you have to actually slow down to get to the fence, which will make the time quite difficult to get. I’m quite sure Michi will be well up there and show us all how it’s done!”

Thibaut Vallette answered his questions via a translator.

On his first Badminton: “It’s my first Badminton and my first four star with this horse. I’m obviously very pleased to be here, it’s a dream come true for any eventer. I’m very happy with my dressage today  but of course this is only the beginning and there’s a lot left to do in the next few days.”

What Thibaut considers the highlights of his test today: “My horse has a very nice trot and it’s important for me to set off to a good start to make that apparent and score good marks for that. I was pleased with that. My horse is still a little difficult to collect and I wasn’t so pleased with the first flying change, but then everything went back into place and I was very happy with the finish.”

Thibaut on the cross country: “It’s his first four-star so my horse will have to go an extra minute longer than he’s used to so that will be an element, but not one that I’m particularly worried about. The horse is a very good all-rounder with great jumping capacities and he’s an enthusiastic cross country horse. There’s a lot to look out for and it will necessitate great concentration and it will mean listening out for all the signals from me to get it right. There are a few profiles that I’m not used to, that I don’t encounter so frequently in France so that will be a new experience for me.”