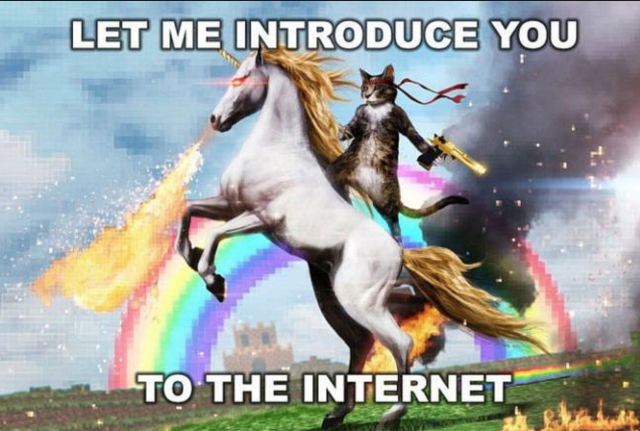 The internet: a veritable smorgasbord of wine-influenced purchases, blurry photos of nearly-naked eventers, and unsolicited advice and opinions. You know what they say about opinions, right? They’re like, um … feral barn cats. Everyone’s got one, they spawn bloodthirsty offspring on a worryingly regular basis and no, nobody’s going to pay a fiver for one of them. Where was this analogy going? Who knows.

With the empty expanse of the off-season yawning around us, eventers have to find creative ways to keep busy in the winter months. For some, that means cross-training their horses. For others, it’s Netflix-binging season. For a worrying majority, it’s the perfect time to get online and start telling strangers that they’re wrong.

Wrong about what, you ask? Well, for starters…

I wouldn’t clip any of mine, writes Barbara, it completely stops them from thermoregulating and rugs don’t do the job properly. Cruel really, just leave them alone.

As a result, Cedric, her ¾ Irish Draught, has grown a coat long enough to lose a small child in. If he was able to trot more than three strides without keeling over from heatstroke, he’d make an incredibly effective getaway vehicle in a diamond heist. Fortunately, his tufts make fantastic grab-handles when three tonnes of snow slides off the roof of the indoor. Who needs a neck strap? Not Babs.

Your horses aren’t wild, just clip the poor things if you’re going to ride them!!!! Bet you don’t believe in shoes either. I’m on clip #6. Itchy!

Annie’s horse is clipped every three weeks on the dot, starting on the first of September, and she doesn’t take any prisoners. Poor Angus has to bear the shame of being parked in front of his friends’ stables and getting liberally heckled while Annie wrestles his tail out of the way to get to some errant cheek hairs. She’s even patch-tested some Veet, but after dodging a swift kick to the head, decided that her husband’s Gillette was a better option for those close shaves. Every time Angus dozes off, the mocking faces of the other horses swim into his vision. “Oi, bald arse,” they snicker, “how’s the breeze back there?” Angus hasn’t slept in weeks.

It’s inevitable: the temperature drops by a couple degrees and the Facebook groups and forums explode in a rugging frenzy.

Sheila from Surrey has an unfortunate eye-twitch that kicks in whenever a lone snowflake appears, and she’s taking no chances with Princess Van Der Hoefslag’s comfort.

Brr! Going to be a cold one, she types from the corner office of her recruitment firm in the City. Princess is snug as a bug in a you-know-what with three rugs AND a duvet today. Necks up, obvs!

What Sheila doesn’t realise is that the long-suffering stable manager has painted a bullseye on Princess’ side and is hiring her out for target practice for the local shooting club. She doesn’t even stop grazing while they’re at it, and the stable manager has more than doubled her Christmas funds in the process.

Meanwhile, across the pond, Marnie in Maine has a conundrum. She’s fully clipped her OTTB, Milo, but on closer inspection – and in daylight – she’s realised that she’s actually turned him into a sad, corduroy zebra. She’s managed to score a spot in a clinic with William Fox-Pitt in two days, and she knows that once he’s journeyed to the tundra, he’ll never return again, so something has to be done.

Keeping mine naked – they’re designed to cope with these changes in temperature better than we are, she replies, feeling a bit guilty as she glances out her window at the stripy, shivering thing sulking outside. She closes her blinds and prays for a good 24-hour regrowth.

In the UK, we have enough mud to drown a hippo in. In the US — or at least, its wilder and woolier regions, you have to contend with an actual Antarctic expedition to get your horses to and from the field. Still, we all know the benefits of regular turnout, and we committed to this lifestyle, despite our mothers trying to push us towards more sensible hobbies, like hamster breeding or base-jumping.

Or whatever this is.

Gina limits turnout to an hour a day in the sand school, because she fears her horse will develop a nasty, untreatable case of mud fever if left to wallow in his field. Georgie, on the other hand, staunchly refuses to give her horses less than eight hours of turnout a day, despite 16 straight days of ice storms and almost hurricane-level winds.

Their discussion on this matter has become a six-hour long slagging match, and they’ve both been banned from the forum indefinitely for overuse of some VERY bad words.

Tina has ridden in three 2’6″ clear round jumping classes, one starter horse trials, and two dressage competitions, where she finished 3rd (out of three). She recently picked up a copy of Mary Thomson’s Eventing Year and is convinced that by following Mary’s routines exactly, she’ll be able to replicate King William’s successful 1992 season with her own Welsh Cob cross, Minty. As such, she chucked him straight in the field at the beginning of November and hasn’t actually seen him since.

Giving mine a proper winter holiday to recover from the season and digest what he’s learned, she writes. It’s really the only way to manage an eventer — I’ll bring him in in January and start his walk work.

If she can find him, that is…

Fliss, on the other hand, has never knowingly given her horse a day off in his life. She finished the season at a three-day and then sent her horse straight to Bootcamp With Bartle, reasoning that nobody ever improved by sitting at home eating Hobnobs. She’s squandered her family’s Christmas money on a spontaneous trip to Germany so that she and Flash can be shouted at in another language, for a bit of novelty value. Her children, she tells herself, are perfectly happy with a pine tree air freshener instead of an actual Christmas tree.

She feels very smug as she stops at a service station on the Autobahn at 3 a.m. to reply, No rest for the wicked here! Off to train with the very best and I think our results will show it next season. If you don’t hear from me again, I’ve moved to Ingrid’s yard!

Kitty grew up in Southern California and has recently moved with her new husband to upstate New York. At first, the prospect of a white Christmas was a real treat, but now, faced with the real thing, both she and her New Zealand Thoroughbred, Fritz, are thinking long and hard about divorce.

Back home, the worst she was faced with was a nasty case of quarter cracks. Now, everyone around her is giving her different, baffling advice on how to deal with snow and ice.

Borium is the only way forward, says one internet expert.

Mounds or nails though? Two different kettles of fish, responds another.

Don’t be ridiculous — think of the tendon strain. Shoeing can stay the same year round, argues a third.

If she’s going to work the horse on the roads, she definitely needs ice studs, someone counters.

What about snow pads? Can’t be without them! suggests a well-meaning contributor.

Have you ever heard of Vaseline?! someone snaps.

Can’t believe you all ride in winter. When there’s actual ICE on the actual ROADS. SO selfish! This is what’s wrong with modern horse owners. Trying to eke every last drop out of your animals. In the old days, we used to bring our horses into the house and get them to do sit-ups for fitness. Come spring, we had NO ROTATIONAL FALLS!!!1!

Kitty closes her laptop, takes a deep breath, and promptly opens it again.

Horse for sale, she writes, due to owner giving up and going into hamster breeding.

The internet is a great thing … just be nice to one another online, okay?