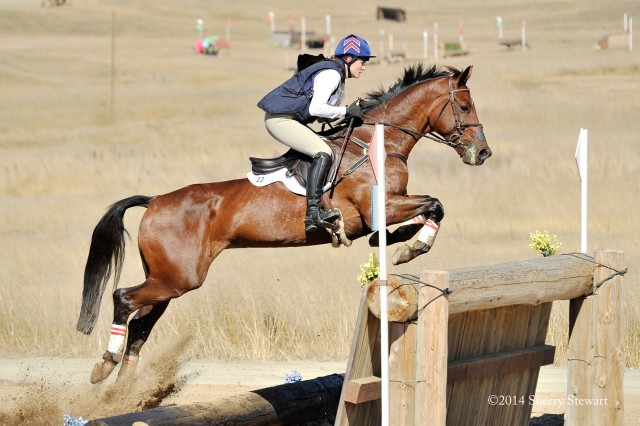 Bonner Carpenter came to Woodside looking for her first completion at the CIC3* level after a couple of unlucky attempts, but she’ll be driving home with a big blue ribbon on the dashboard. A double-clear cross-country trip was enough to move Bonner and Basco from second into first when overnight leader Bea di Grazia withdrew before cross-country.

“I went out there, honestly, just to get around,” Bonner explained in a press release. “But when I was on the early minute markers, I began to think that it would be possible, so I just kept going.”

The 26-year-old calls Dallas, Texas, home but has been in California since August in preparation for Galway Downs at the end of the month. It was her first time competing at Woodside and her first time tackling a Derek di Grazia course.

“I knew I had to be aggressive and ride forward to every jump. You have to be attacking all the way around,” she said. “But it really is a super course. Derek uses the terrain really well, and it feels like a huge galloping course.”

It’s been unseasonably toasty out there this weekend… 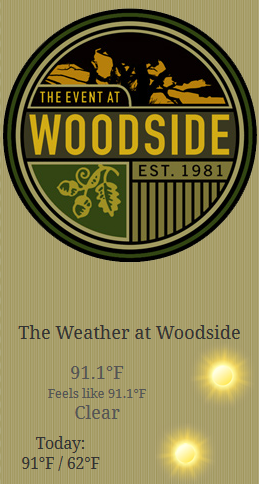 … prompting the ground jury to move the CIC3* cross-country start to 10:20 a.m. instead of the scheduled 1:20 p.m. Being a Texan, Bonner is used to the heat but was appreciative of the decision. “I think it was great that they changed it. It would have taken a lot more out of our horses to have gone in the afternoon,” she said.

In addition to glory, Bonner earned $3,000 along with the Adequan USEA Gold Cup and the CTETA Founders’ Cup, established to honor Robert E. Smith, whose vision established the Horse Park at Woodside in 1981. Since the CIC3* is a member event of the 2014 PRO Series Tour, she also walked away with a seven-dose box of Adequan, $350 in Nunn Finer products, a Smart Pak Wellfleet Eventer Bridle and $200 toward a Point Two Air Jacket. Nice haul, girl!

Second-place finishers James Alliston and Tivoli must feel like the rust has officially been knocked off, this being their second run since Rolex in 2013 and their first back at the Advanced level due to an injury.

James earned $2,250 for finishing second and, even though he and Tivoli won the Woodside CIC3* in 2012, he said he wasn’t at all disappointed.

“I figured I’d just take the time as it came, but he was right there from the start, so I just let him go,” said Alliston, who finished two seconds slow. “It’s amazing how older horses like him seem to remember everything. It was like he hadn’t had any time off.”

Like Bonner, James was thrilled with the way the course rode. “Derek is my favorite course designer,” he said. “He blends everything together into a complete course. I think he’s the best course designer in America, and maybe in the world.”

Kaitlin Veltkamp and Flashpoint D laid down a double-clear trip to round out the top three. Ashlynn Meuchel and Morning Star bested the small Advanced division. 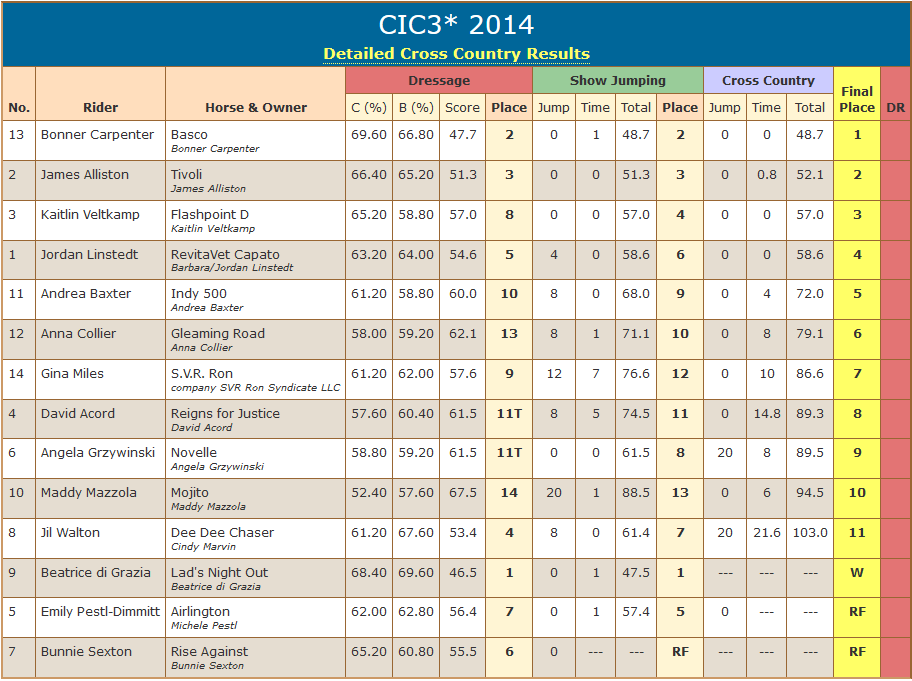 Lauren Billys and Castle Larchfield Purdy hung on to their show jumping lead for the CIC2* win. As she mentioned yesterday, Lauren had two horses competing in the division and was hoping to get a feel for how fast the course was riding on her first mount, Ballingowan Ginger. The mare picked up a run-out but Lauren capitalized on the experience for her second ride on Castle, a new horse. 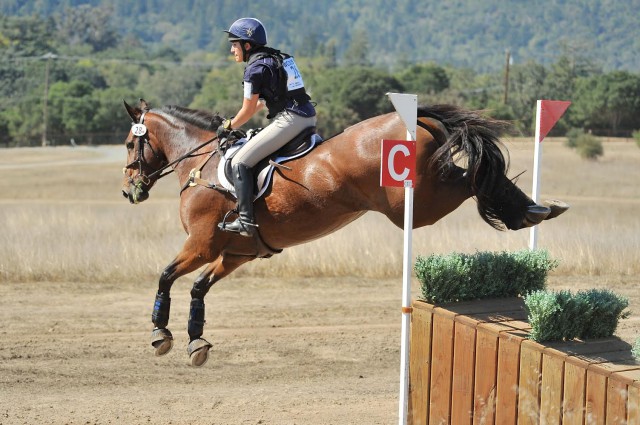 “I was going to be really brave today, and I got three-and-a-half strides instead of four strides to the wedge (at fence 10C), so she had no choice but to run past it. She jumped just great the rest of the way — I was bummed,” she said. “So I rode it differently on Purdy — I held for the four strides. I thought you were going to have to ride forward more to get the four strides, but you didn’t.”

Lauren trains with Derek di Grazia but he didn’t cut her any breaks on the course. “Wedges are my problem with Ginger, and his course uncovered it,” she said. “But there’s really no point on this course when you think, ‘OK, I’m home,’ until you get to the end. There are so many great questions, and he keeps you on your toes all the way around.”

She added, “I went out there with a plan, and it didn’t work out perfectly everywhere. But it still rode well, and I came off the course a little better rider because of the way he designed it.”

The 26-year-old lives in Sanger, California, but is a citizen of Puerto Rico and hopes to represent her home country in the 2016 Olympics. The next event on her calendar is CCI2* at Galway followed by a move-up to Advanced. 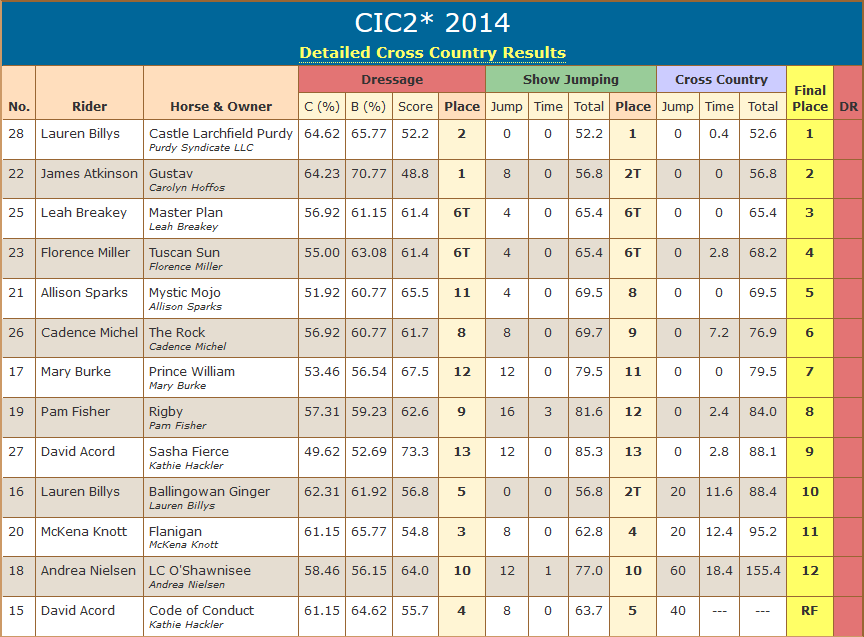 CIC1* winner Frankie Thieriot had said yesterday that, this being 6-year-old Chatwin’s first FEI competition, she would decide how much to put the gas pedal down when she got out on course. Her first priority, she said, was to cement their partnership and to ride the course in a good rhythm whether that meant making it under the optimum time of 5:37 or not. 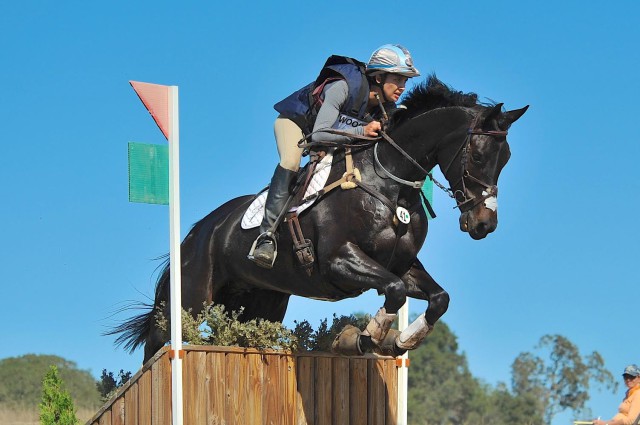 Chatwin came out swinging and ate up the course — Frankie even had to check him a bit toward the end.  “He was awesome,” she said. “His natural gallop is so big that we were up on the time at three minutes, so I slowed down to come home.”

Like Bonner and Lauren, Galway is the end-goal of Frankie’s 2014 season. “Even though he doesn’t have a lot of mileage, I thought Derek’s course was really good preparation for him to take the next step of doing the CCI1*,” Frankie said.

Continuing in Woodside’s tradition of rewarding its winners handsomely — a rarity in the event world! — Frankie received $1,000 for her first-place finish. 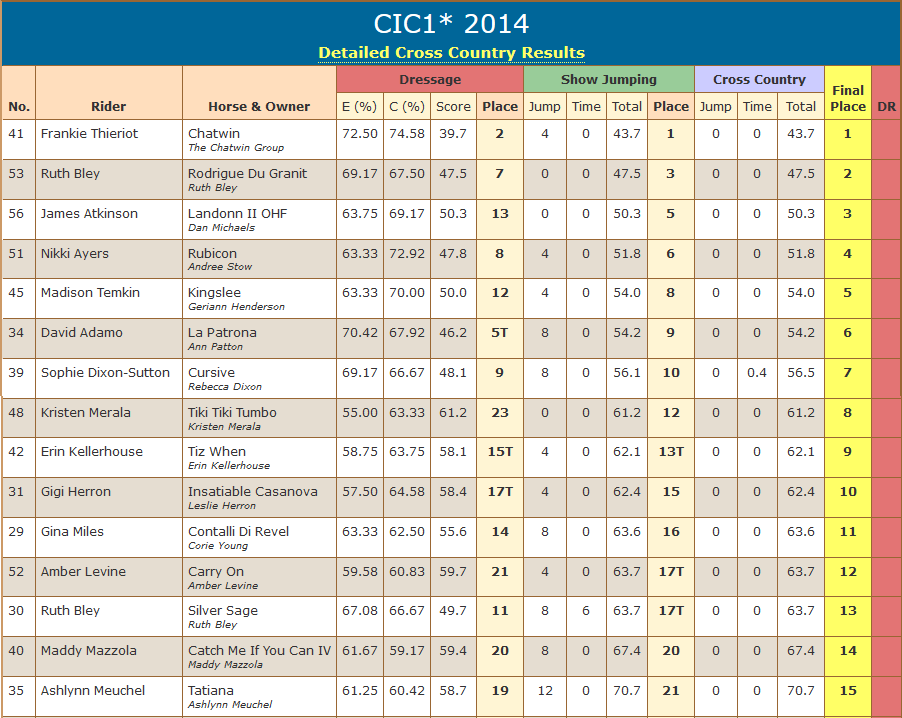 Frankie and her friends created a special award in 2011, the Fric Frac Berance Award, in memory of her former advanced-level horse. The award’s intent is to honor the horse in the CIC3* whose cross-country performance best emulates Fric Frac’s love for and cleverness at meeting the challenges of cross-country courses, jumping in a way that takes care of himself and his rider.

Frankie and a panel of three to five others choose the winner each year at the Woodside, and this year they chose Kaitlin Veltkamp’s Flashpoint D, a 13-year-old warmblood gelding whose faultless round propelled him to third place in the CIC3*, with no penalties added to his dressage score. The award comes with a $1,000 prize.