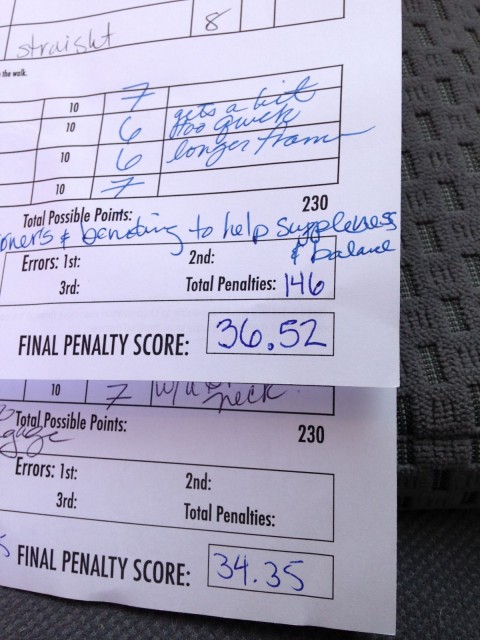 Two weekends ago at a combined test hosted by Woodland Stallion Station I achieved something I’d previously thought impossible.  I finally managed to score in the 30’s in Dressage.  Not just once, but twice! I still find myself reviewing my score sheets to make sure that it actually happened.

For a lot of riders, attaining a score in the 30’s is a relatively straightforward and unremarkable affair. Get your game face on and then head in to the ring!  In the ring, focus on keeping your horse round, with a consistent rhythm and make sure you’re spot on with your geometry.  In my case the “easy 30” has seemed almost mythical.

Dressage has been a long and often depressing road through the 40’s. Historically my score sheets have been riddled with at least one variation of my least favorite word, ‘tension’.  On my mare’s first outing, we had a 4 in the collective marks for Submission. (I suspect that the fact that all of the trot work in the second half of that test was extended rather than working had a big part in that mark.) Friends have regularly consoled me with comments like, “There were some passable moments,” or “Now you can get on to the good stuff”.  My score sheets have often had kind, almost apologetic comments like “Tactful ride!”

We went to the combined test at Woodland Stallion Station just to see what the test rode like and to get some feedback before our first real outing of the season.  We came away with not only feedback and some ideas of what to spend the next week or two working on, but also an oddly optimistic feeling. There’s a voice in my head that swears these two scores in the 30’s were a total fluke, but there’s also a whisper wondering if we might stand a chance at being competitive some day.  The way the movements are ordered in Novice A is so much better for both my brain and my mare’s.  I’ve finally figured out the right warm-up routine for my mare. I think we might actually be starting to get it.

We’re off to Twin Rivers in just over a week for our first outing of the year. Lets see if lightning can strike twice.