At just 7 years old “little eventer” Claire Peters has a riding resume as long as that of kids twice her age.

Claire was first introduced to horses before she was born, riding around in utero with her dressage enthusiast mom Anne. She sat on her first horse when she was 7 months old and started riding a walk-trot babysitter Welsh mare named Libby at a year-and-a-half. 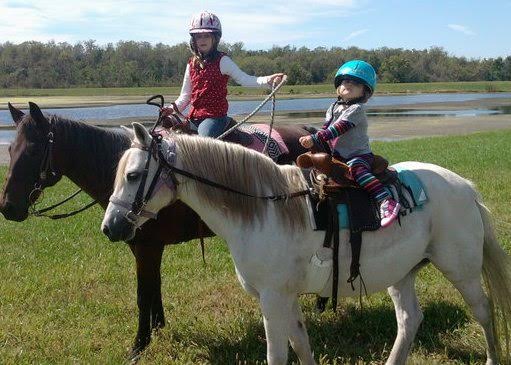 By age 2 she was tagging along with her 15-year-old eventer sister Grace to Pony Club meetings and rallies. She joined Pony Club herself a couple years later, at age 4, passing her D1 test on Libby with flying colors. 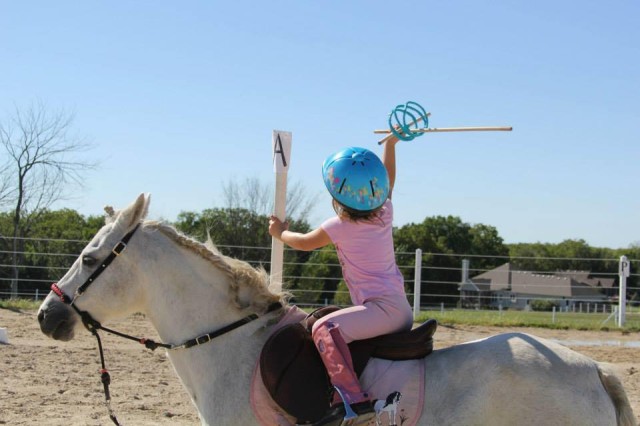 Claire warming up her mom’s 16.2-hand dressage horse at age 4:

Anne says Pony Club has provided the perfect foundation for her daughter. “It gave Claire the opportunity to learn not only valuable horse management skills, but to also participate in learning-structured competitions with the older kids,” she says.

Claire and Libby participated in their first rally in August 2015. At age 5 she was the youngest participant of the rally, which was formatted much like a mini trial with dressage, show jumping and obstacle course phases.  Claire and Libby scored over 70% on their dressage test, tying with two of the oldest kids for the highest dressage score of the rally. She sailed through the show jumping and obstacle courses to help her team finish in second place. 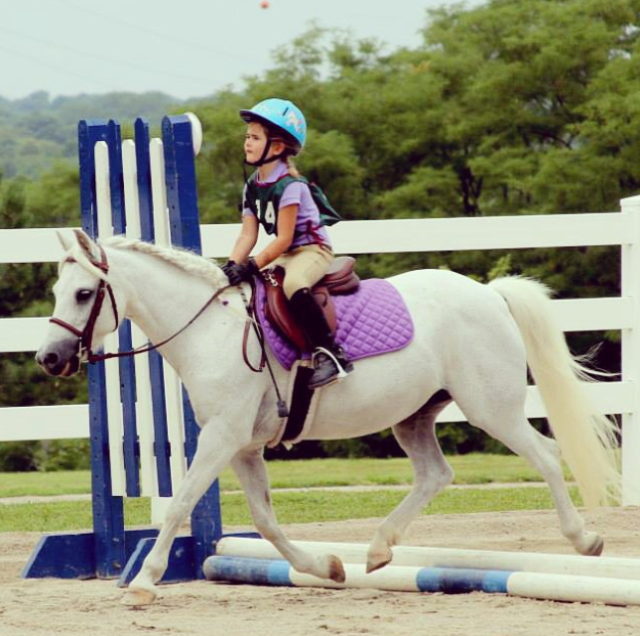 As a result of their success, Claire decided to move on to bigger goals. She wanted to be just like her big sister Grace, who was already training with event rider and coach Julie Wolfert and competing in Area IV recognized events. Anne recalls, “When her big sister went out to the pasture to ride and train, Claire would tack up Libby and be right behind her.”

Anne built Claire her own miniature cross-country course, she explains, “because in Claire’s ‘world’ she was sure her little pony was really a 17-hand upper-level event horse that was effortlessly flying over Rolex-sized jumps while she confidently piloted the wild beast.” 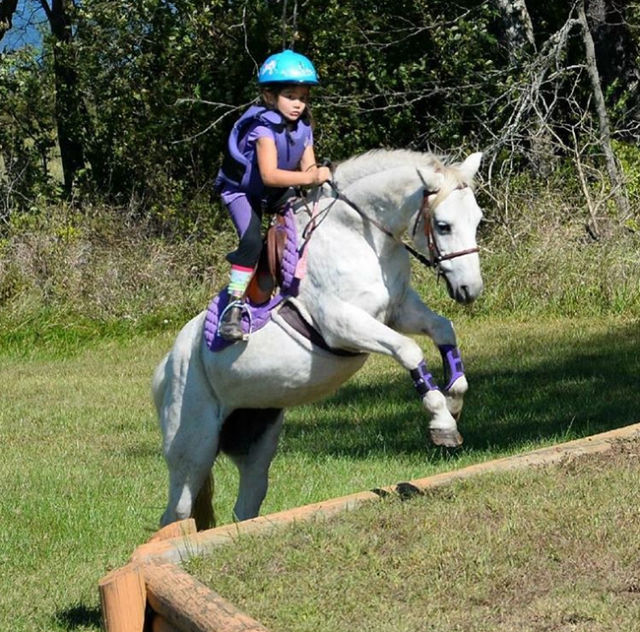 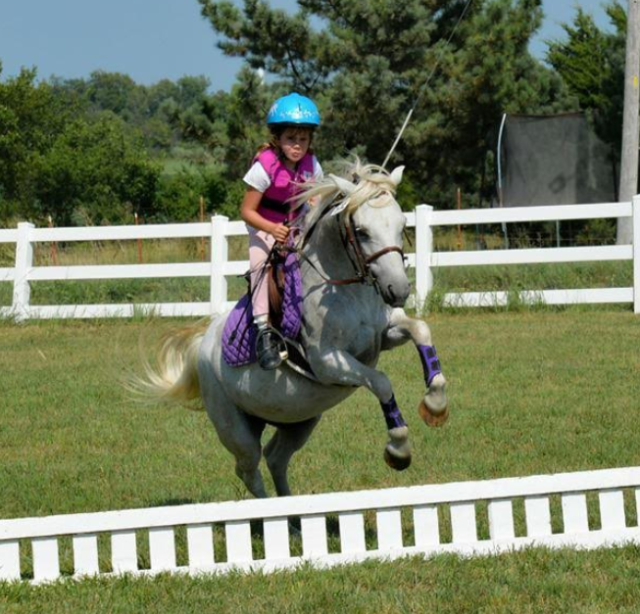 However, when the young firecracker — nicknamed “wild child” by friends — started cantering her pony over the obstacles with the reins in one hand and the other hand waving her pink sparkle crop in the air all the while squealing “wa-hoo!” mom knew it was time to start looking for a step-up pony.

Enter Tuff Dream (“Tuffy”), a western-trained POA Anne found last spring that she thought would be a good match for Claire. While he didn’t have any formal dressage or jump training, he had “buttons” and a kid-proof canter. They bought him sight unseen and brought him from Maryland to their home in Kansas.

Upon meeting him, Anne says, “Claire immediately invited him into her world of big dreams, informing him of all the things they were going to accomplish together.” 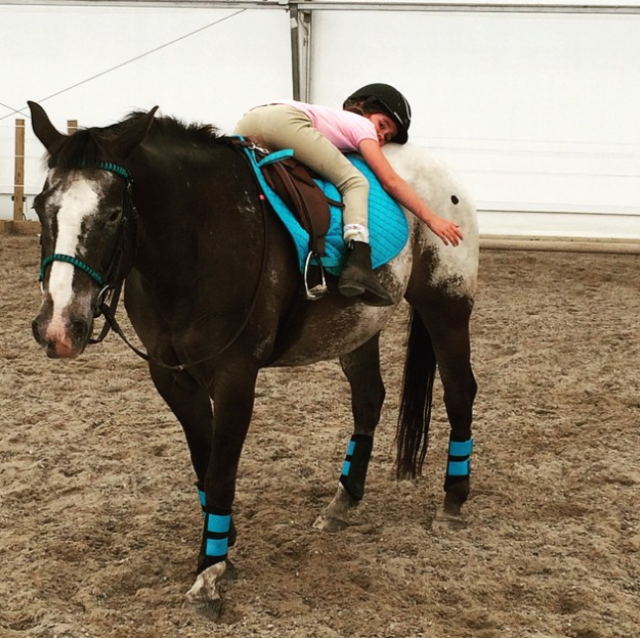 Tuffy took to jumping like a pro so Claire started popping him over cross-rails, logs and little brush jumps. She took him cross-country schooling at the local horse park with Grace, trotting him through the water and cantering him through the fields. 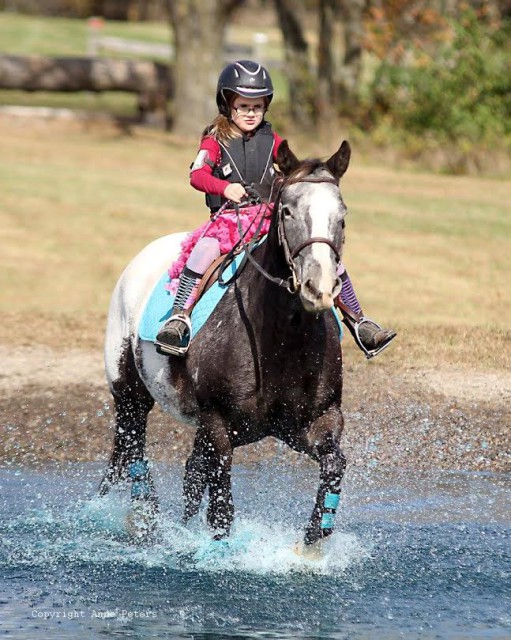 By August they were ready to enter their first Pony Club rally together. “She spent all summer practicing her dressage test because she insisted on doing it by herself without a reader,” Anne says. “Since this rally would include a ground pole cross-country course, she spent many days out in the pasture practicing courses. She had fun making up new courses and trying to remember them just like she would have to do at rally.” 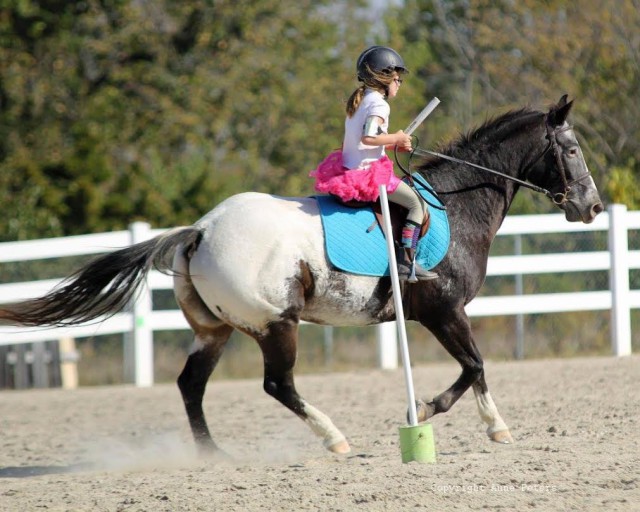 But a few weeks before the rally, Claire sustained a traumatic eye injury (non-horse related) that required emergency surgery to repair a mangled cornea with 13 stitches and left her with a chunk of her iris missing.

At the start of every follow-up appointment, in true eventer fashion, Claire asked her surgeon, “When can I ride?”

“Finally, the week of her Pony Club rally, Claire brought pictures of her and Tuffy to her doctor appointment and begged the doctor to let her ride in the upcoming rally,” Anne recalls. “The doctor gave in to her steely determination and gave her the go-ahead to ride under the condition that she must ride cautiously and not fall off risking damage to her eye. Claire gave her ‘the look’ that says ‘Relax, lady, I know what I’m doing!'”

And ride she did. Claire completed the entire mini trial on her new pony with just one eye, as her bad eye was covered by a patch. 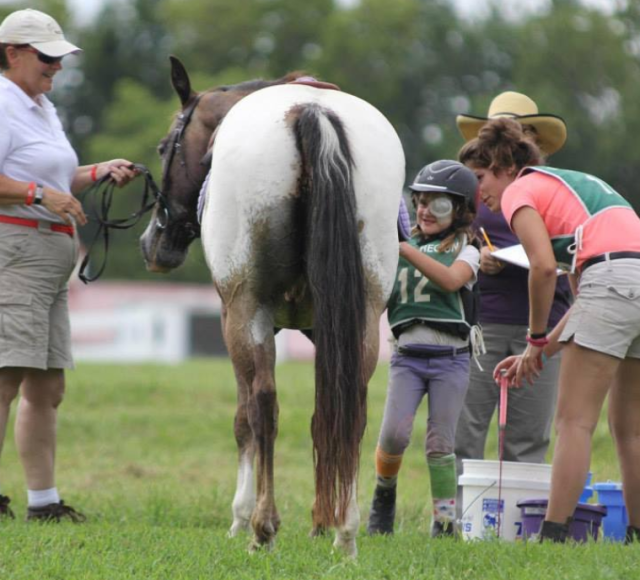 A short while after the rally, it was time to remove the corneal stitches. The surgeon found that four of her 13 stitches had been loose and rubbing against Claire’s cornea. “As painful as the the loose stitches had to have been, Claire never complained,” Anne says. “She just wanted to ride. When you’re busy making your dreams come true, there is no time for pain. If you’re an eventer, you already know this.” 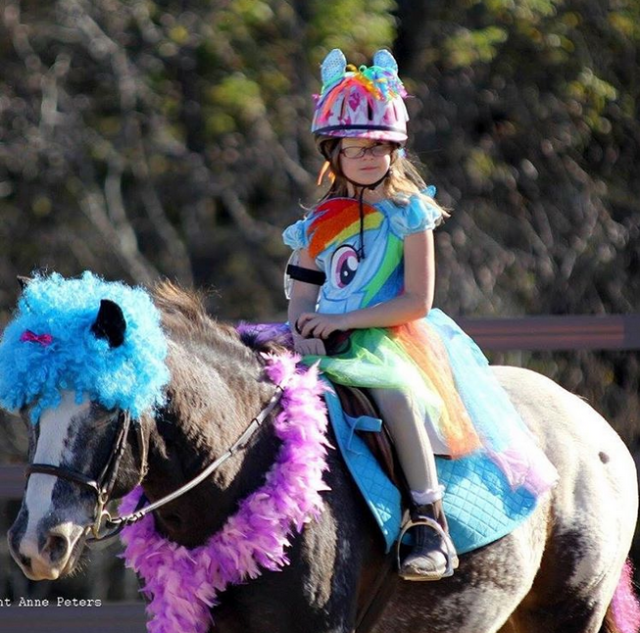 A girl can never have too many tutus. Photo courtesy of Anne Peters. 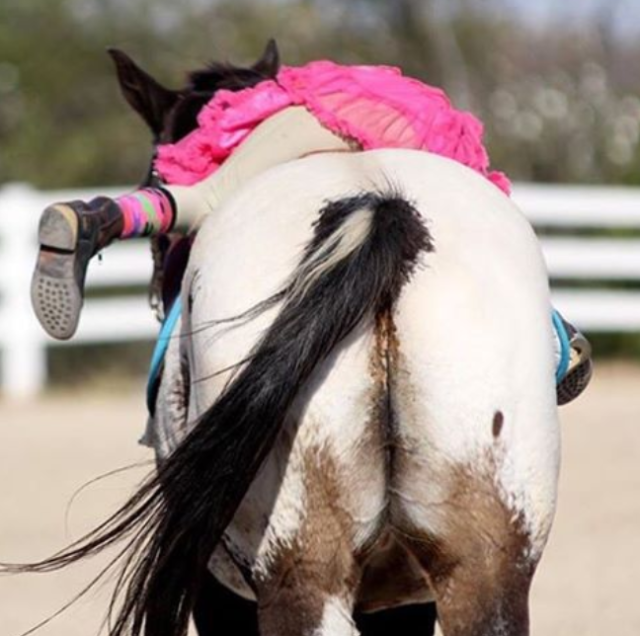 Never underestimate the power of determination and sheer will. Photo courtesy of Anne Peters.

Claire turned 7 at the end of January this year. She started the season competing in her first Mid-American Combined Test Association show, doing a dressage test and finishing in 2nd place. She and Tuffy have big plans for 2016: competing in local dressage schooling shows, getting their jumping in shape for a starter-level combined test, and attending the Midwest Region Pony Club Mega Rally in Nebraska in June and another Pony Club rally in August. 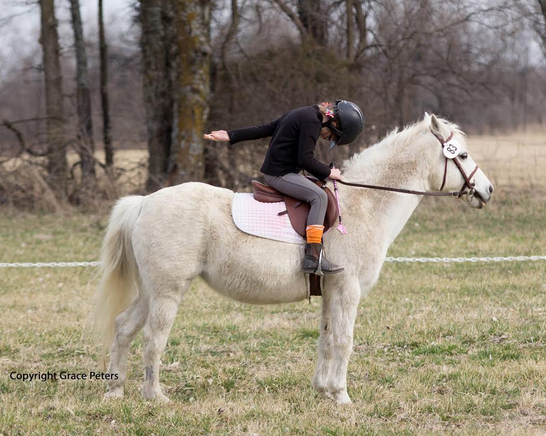 When she’s not riding you can find Claire at shows and lessons with her big sis, helping as a groom or helping set up the dressage ring. Her appetite for all things horses, Anne explains, is insatiable. 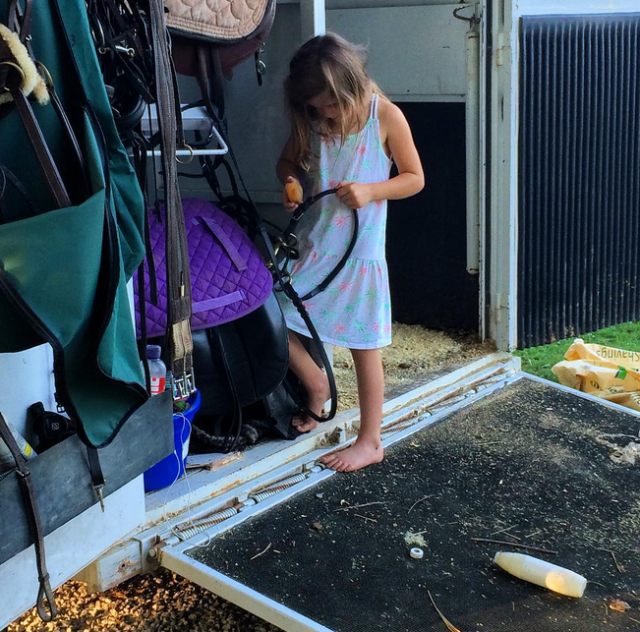 “Claire has an endless supply of energy, a healthy amount of sass to handle naughty ponies, and an infectious zest for life,” Anne says. “She is always willing to offer sound horse management and riding advice and she will continue to invite us into her bigger-than-life world where only fun, determination and big dreams exist.” 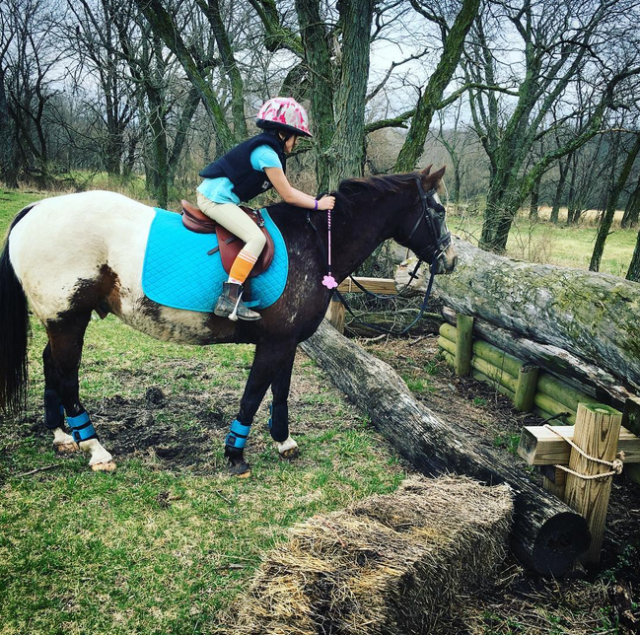 Clearly the sky is the limit for this big-hearted “little eventer.” In the meantime between now and when she makes the U.S. Olympic Eventing Team at age 10, you can follow her adventures on Instagram @little_eventer.