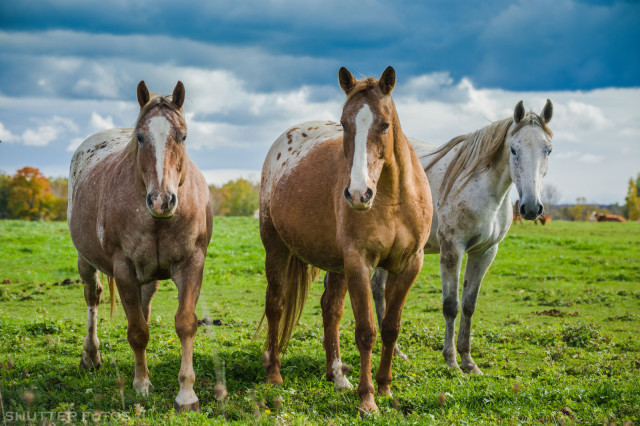 The group dynamics of a herd of horses are interesting to observe. Personalities emerge and a hierarchy inevitably becomes apparent over time. As owners, however, we hope that our horses don’t get into too much trouble trying to climb the social ladder…and keep the bite marks to a minimum.

I’ve moved multiple times with Willow, an Appaloosa pony mare, and she’s integrated really well into new herds, with both mares and geldings. This is mainly because she doesn’t care where she’s placed in the pecking order. You can see it on her face when she’s turned out with new horses and they think about sizing her up: “Don’t bother.”

Fey, however, a 5-year-old chestnut mare, is an absolute sweetheart in the barn – eager for attention and constant snuggles. In the pasture, however, she’s a total bossy pants. She insists the younger horses eat their hay on the opposite side of the feeder, where she doesn’t have to look at them. Of course she’s tried to push Willow around, but the pony just moves away, unimpressed.

We associate stallions and dominate mares as being the leaders in herds of wild horses, and we see some semblance of that dynamic in domesticated equines. However, when it comes to decision-making, the responsibility is apparently shared among multiple members of the herd, according to a recent study.

Examining two groups of horses that lived without supplemental feeding or human intervention, French researchers studied the groups’ movements in an attempt to identify leaders. You can read about their findings summarized by Horsetalk at this link.

Feed Healthy Treats: Who doesn’t love giving their precious ponies a goody now and then? If your horse doesn’t get mouthy about it, treats are positive reinforcement for a job well done, and a nice occasional gesture from “mom” or “dad.” But are treats healthy for your horse? We know we shouldn’t eat a pint of ice cream every day, no matter how our day went at work, but how much is too much for your horses? Choosing the right treats and feeding them in moderation is the key. [Horse Canada]

Dams Shape Foals Relationship with Humans: Some breeders say that a foal is influenced 60% by its dam and 40% by its sire. Regardless of the physical qualities they receive from their parents, however, the nurturing mare will greatly influence the foal’s habits and social relationships. A recent study shows that when it comes to human interaction in particular, the dam’s attitude is especially important. [The Horse]

Why Horses Spook: All you want to do is have a nice quiet ride to relieve the stress of the day, but your horse can’t seem to keep his brain between his ears, as he jumps and jerks at pony-eating bushes, buckets and bugs. Lauren Bond, an equine behaviorist, did the math over on our sister site, Horse Nation, and explained that often a spooky horse is reacting to multiple stimulus instead one scary monster after another. [Horse Nation]

Adding Oil to Feed: Need to pack pounds on a hard keeper or a horse whose work load has recently increased? One cheap and easy way to add calories without adding sugar or starch to the diet is splashing a bit of oil in their feed. Depending on the type of oil you choose, your horse may also receive nutrient benefits that will improve their immune and inflammatory status. [Horse Canada]

Why Does a Horse Bite? There are many reasons why a horse may resort to biting – fear, pain and protection are just a few. Biting can become a very dangerous habit in the barn and is one of the hardest things to train out of a horse. Understanding why horses bite may help you stop the behavior. [The Horse]