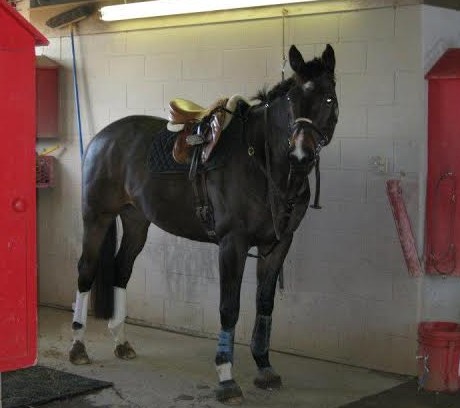 3 Sleets to the Wind ready to get to work at home. Photo by Mandy Alexander.

Mandy Alexander was just looking for a project horse to work with while she was in college. She rode for the equestrian team at Midway College and was in a team meeting when she half-jokingly said that she wanted to find a free lease horse to work with as a project. “One of the girls piped up and said she knew of a horse I should try,” Mandy recalled. “We laughed because we knew he was at a hunter barn and that I was looking for a potential event horse, but I decided to go look at him anyway.”

3 Sleets to the Wind had retired from racing a few years earlier. Racing under the name Triple Sleet, the 1996 gelding by Seattle Sleet out of Call Me Peach raced 21 times during a three year career, winning one race and bringing home around $28,000. “Cameron” was owned by Wyn Clark of Trackside Farm in Versailles, Ky., who wanted to find a good home for the horse after he retired from racing. Cameron ended up at a local hunter/jumper barn as a lesson horse when Mandy went to try him out.

“They told me at the barn that he was really sweet but that he didn’t really like to jump,” Mandy said. “I figured he would be a fun horse to just have around and learn on. If I didn’t go far on him, it was ok.” So Mandy decided to try her luck with Cameron and began working with him to find out if he had potential to be an event horse.

“When I finally decided to show Cameron, I thought I knew the ropes. I entered Novice at an unrecognized event, and off we went,” Mandy said. “Dressage was less than par, and he ran away with me on cross country. It was finally in show jumping warm-up that a dear friend came over and offered to introduce me to her trainer that I knew I needed assistance.” Mandy’s friend’s trainer helped her in the warm-up, and Mandy noticed a difference immediately after the adjustments were made to her riding. The biggest takeaway from this competition was that Mandy knew that she actually had a horse who loved his job, something that she wanted but had not expected to find in Cameron.

The pair moved up to Advanced in 2009 and consistently placed either in the top ten or well within reach at the Advanced and Intermediate level. They had also successfully competed at the CIC2* and CCI2* level prior to moving up to Advanced. Mandy commented on the boldness Cameron displayed on cross country. “He would have gone over any fence in his path. There were many times, especially at Advanced, when we would be marching to a huge fence and I’d have a fleeting thought, ‘Why do they do this for us? What makes them jump this stuff?’ The answer was because he loved it, not because he was stupid or had no sense of self-preservation. He just loved his job. He tackled every fence like he owned it. I never felt in trouble or unsafe when we went cross country.”

Cameron was retired after competing at Millbrook in 2010. Some past issues with his feet were popping up again and causing him discomfort, and Mandy decided that her longtime partner owed her nothing and decided to retire him from upper level competition. He now helps teach riders at the lower levels of the sport and participates in intercollegiate horse shows from time to time as well.

“Cameron taught me to reach for the stars because it is achievable,” Mandy said. “Without the heart he showed in his career, I am not sure where I would be today. I learned perseverance, patience and poise from him. My greatest triumph with Cameron was taking a horse that was supposed to only be a fun project to the CCI2* and Advanced level. He helped me achieve a level in my riding that I always dreamed of but never really believed I could or would achieve.”