Thoroughbred racehorses that go on to second careers are unique in that they have two retirements in their lifetimes: the first from the track and the second from the show ring. Thoroughbred Legends seeks to honor off-track Thoroughbreds that went on to accomplish great things as upper-level eventers and now enjoy a second retirement in their golden years. If you know of a great Thoroughbred for this series, email [email protected] 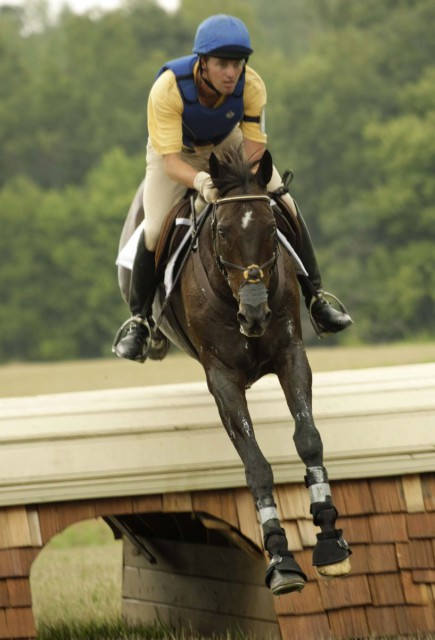 Will Faudree and Antigua. Photo by Mike McNally.

Will Faudree was 20 years old and a working student for Phillip Dutton when he began searching for a new horse. While he wasn’t completely sure what his ultimate goals were, Will knew he wanted to have a horse to learn on and as he moved to the upper levels of eventing. “Phillip really wanted me to get a horse that could teach me. I’d been fortunate enough to have great instruction growing up, but I always had green horses that I learned a lot from but that couldn’t take me as far as I wanted to go,” Will said.

“Phillip had a conversation with my parents, and we’d looked at a couple horses, but Phillip had his eye on (Antigua). He’d seen the horse at the Sydney Olympics, and it had become available.” Will went to Australia on a horse-shopping trip, and “Brad” was the first horse he looked at. He went on to look at a few other horses, but the 11-year-old unraced Australian Thoroughbred was Will’s top pick. “He passed the vet with flying colors, and the rest was history.”

Antigua, registered in Australia as Under Arm, is sired by the French stallion Match Winner and out of the Australian mare Great Mistake by Dorset. Will knew this horse would be one that could teach him. “He’d been to the Olympics, and he was still young enough that I knew he would take me far.” Will brought Brad home with him in 2001 and set to work forming a partnership with his new horse.

“He’s an old soul,” Will said. “I really think he knew what his job was; he knew that he was a mentor to me.” Will and Brad made quick work of the upper levels, never incurring a cross-country penalty through their time together. Will made it around his first Rolex in 2003 with Brad, finishing 12th overall. That year, the pair also was selected to represent the USA at the Pan American Games, where they took team gold.

Will and Brad improved upon their Rolex placing twice more, finishing 10th in 2004 and sixth in 2006. In 2006, they were selected to the World Equestrian Teams eventing squad and traveled to Aachen, achieving a top-20 individual placing. In addition, this pair competed at Badminton and Burghley, finishing in the top 25 at each.

“At Carolina International this year, we honored the members of the gold medal winning 1984 Olympic team,” Will recalled. “I told Karen Stives that I owed a large part of my career to her. After I’d gotten around my first WEG in 2006, she congratulated me and said, ‘Don’t expect your next horse to fill his shoes.’ I always remembered that and was always so thankful to be reminded of how special he was for me.”

Brad turned out to be everything Will hoped he would be, and then some. “I think that Phillip’s goal was for Brad to teach me the correct feel,” Will said. “I’d give anything to go cross country on him again; he was just such an amazing athlete. I never had a cross-country penalty on him, and not because I’m a great cross-country rider. It was because I would screw up royally, and he would pat the ground and get me out of it as if to say, ‘See? Now next time you have to help me out!’

“I didn’t teach that horse a damn thing. He taught me so much, and I’m so grateful for him. My favorite Broadway musical is ‘Wicked,’ and there’s a song that will always remind me of him: ‘For Good.’ One of the lyrics says ‘Who’s to say if I’ve been changed for the better, but because I knew you, I have been changed for good.’ That’s Brad to me. He changed my life. He gave me the plane ticket to the career I’ve dreamed of my entire life.”

Will wrote a lovely tribute to Antigua, which he gave in a speech at Antigua’s retirement ceremony in 2009. Click here to read the text of the speech.