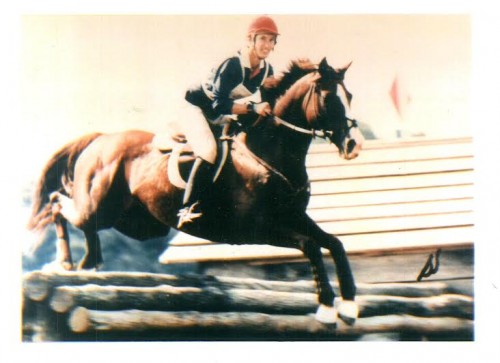 In 1969, a deep copper chestnut colt was foaled in Maryland, by Mystic II out of Babadana. Owned by Mr. and Mrs. M. Valentine, the colt was from royal steeplechasing lines on both sides of his family, having many successful and famous racehorses as relatives. Both Mystic II and Babadana had also produced Grand Prix jumpers and many show horses. Judy Wardrope has documented Babamists’s complete pedigree with references to today’s eventers and show jumpers. “Given the extent to which the ancestors appear in the pedigrees of world class eventers, it soon becomes evident that this is the lineage of a horse that was genetically destined to be a sire of distinction,” Wardrope said. “Babamist was not a fluke. He merely fulfilled his destiny.”

Babamist performed well on the track, racing 13 times over four years, winning four flat races and four straight hurdle races before retiring from the track life due to an injury. The Valentine family maintained their ownership of the lovely stallion, but sent him to Frank Chapot to train and show as a jumper after he recovered from his injury. Mary Hazzard, an avid breeder and eventer, took an interest in Babamist and bred her mare Badfix to him, hoping for something spectacular. What she didn’t expect was to be in a position to own the stallion herself. “Frank [Chapot] told me that I would have to ride him a little more than twenty minutes a day, as the colt had a lot of energy,” Mary said. 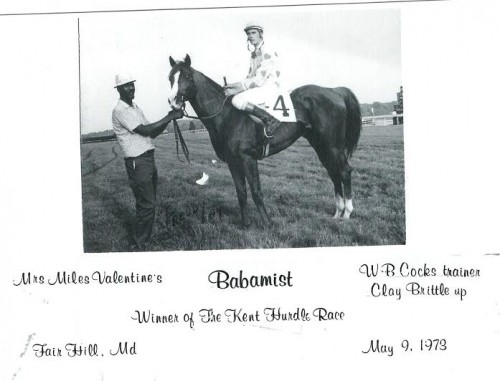 Based in Chester County, Pa., Mary proceeded to use the countryside to settle Babamist. She hunted him with the Cheshire Hunt, evented him at the upper levels, stood him at stud and even used him as a quiet guest horse. He went in a rubber snaffle and was always a gentleman. “I worked a full time job and rode him after work many times in the dark,” Mary said. “He always took good care of me”.

Babamist competed with Mary at all of the big-time competitions of the era: Fair Hill, Chesterland, Radnor, Ships Quarters and the event at Peter Green’s. The selection trials at Peter Green’s farm were particularly memorable for Mary, as the cross country was held during a lightning storm. “I think we were going about 900 meters per minute,” she said. ” We jumped across the whole water complex in one effort! The competition was not my life; it was my salvation, and I do it because I love it, as do my horses. Thank God for talented horses!” 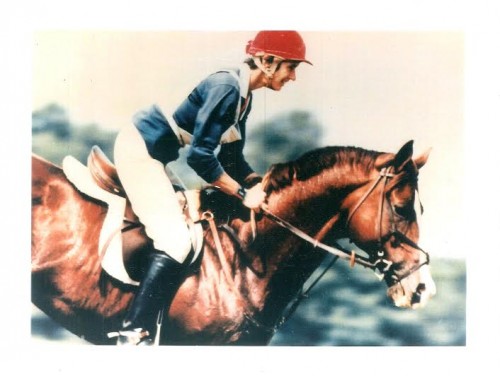 While Babamist was certainly successful at the upper levels as a competitor, he’s had an even bigger impact in his career as a stallion. He stood at stud during his whole time as a competition horse, and the results are astounding. According the the record of all U.S. eventing sires, Babamist stands head and shoulders above the others, with an impressive 4,069 points assigned to his progeny. He beats out horses such as Master Imp, Highland King, Cruising and Cavalier by more than a nose. Babamist has sired gold medal winners, Heyday, Good Force, Mystic Mike, Mystic Milo, My Turn, Snowy River, Mystic High and 87 other registered Thoroughbreds and a host of unregistered top eventers like Little Tricky.

Even today, we see the results of his progeny. Fair Hill’s 2013 Young Event Horse East Coast 5-year-old champion was Mr. Bo Jangles, who is by Mystic Replica, a prolific eventing son of Babamist. FYI, another son of Babamist, was also competing at Fair Hill in the CCI2*, and Mary was lucky enough to catch them completing their dressage tests at the very same time. “The grandchildren, including Magic Replica ridden by Ryan Wood, continue to prove the Thoroughbred blood is an asset to the event horse of today.”

If you know of a great Thoroughbred for this series, email [email protected]