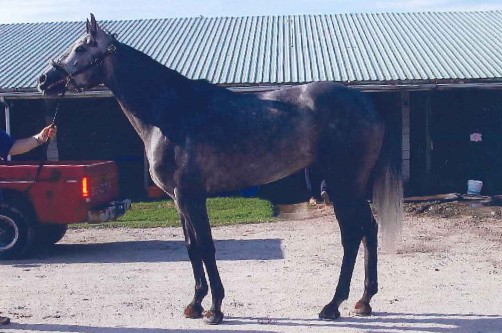 Zane as he was coming off the racetrack. Photo by Pam Sills.

Blue Cliff was foaled on March 27, 1998 as a grey or roan colt by the successful stallion Great Gladiator. The gelding raced for three years, running 39 races, winning five, and garnering $89,000. He raced exclusively in Canada, campaigning at Woodbine and Fort Erie Racetracks. He retired sound and ready for a new career at the age of five, and was lucky to be pulled off the track by Eventer Mark Nelson.

Mark did a few events with the grey gelding and sold him along to an amateur. It was quickly apparent that Zane was too much horse for his new owner, and he was sent to Pennsylvania to be sold again. Fifteen-year-old Stephanie Sills was searching for a new horse online when she came upon the striking dark dappled grey, and was informed by Zane’s current trainer that she would be well advised to not waste her time on the gelding. He had developed a reputation of being a righteous pain in the ass, and was difficult to get along with. Undeterred, Stephanie went to try him and they immediately clicked. She bought him and shipped him home to Vermont, and their journey began.

While Zane was a complete sweetheart on the ground, it was a different story once he was under tack. “He spooks at everything. His spooking was so bad that we had an eye specialist come out and look at him because we feared he actually had impaired vision,” remembers Stephanie. “His eyes are completely fine. He’s just ridiculously spooky!” The gelding also had a habit of rearing, bolting and exploding whenever another horse got within fifty feet of him in an arena, a trick that left Stephanie on the ground more than once. 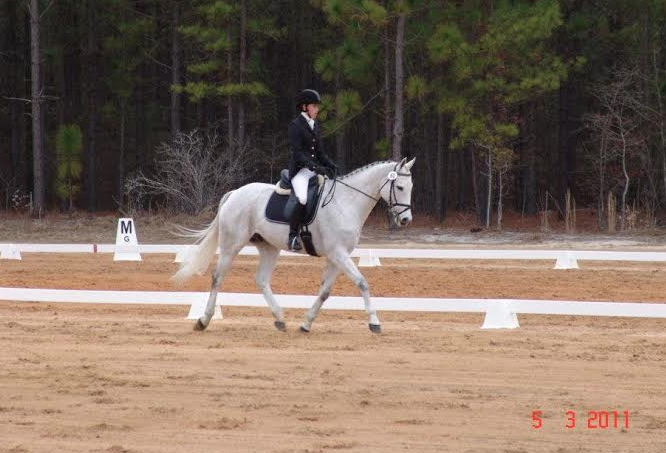 In May of 2006, the pair attacked their first event together. By her own admission, Dressage was a disaster, as Zane has a deep fear of dressage booths, dressage letters, sand hitting the sideboards and other moving horses. He had a stop in show jumping over a roll top, and trotted the cross country course, gathering twenty-two time penalties at Novice. Zane proved to be much more brave over jumps than he was in the dressage arena, and Stephanie was a determined rider who helped him with his confidence until he became a cross country machine.

While the spooking was always good for keeping Stephanie busy as a rider, Zane also struggled with his show jumping. “He’s not a scopey horse, he is athletic and he tries very hard, which is why he got so far,” says Stephanie. “We used to go bowling for rails. Three or four was normal when we moved up to Preliminary, and I think we even had eight at one competition”. Zane was capable of winning on the flat, and he was always fast and clean on cross country, but his show jumping record caused more than a few disappointments.

In 2009 the pair moved up to the Intermediate level. “At Richland Park, our third Intermediate, I had just turned 19 and probably had no business being at that level, but I had young fearless bravery on my side,” says Stephanie. “And then I walked the cross country course! It was almost the same as the CIC2* course, and I rode at the end of the day. I don’t think I said more than five words all day and I surely didn’t eat”. Despite her worries, Zane left the box and gave her a perfect round, finishing with a clear round and the second fastest time of the division. 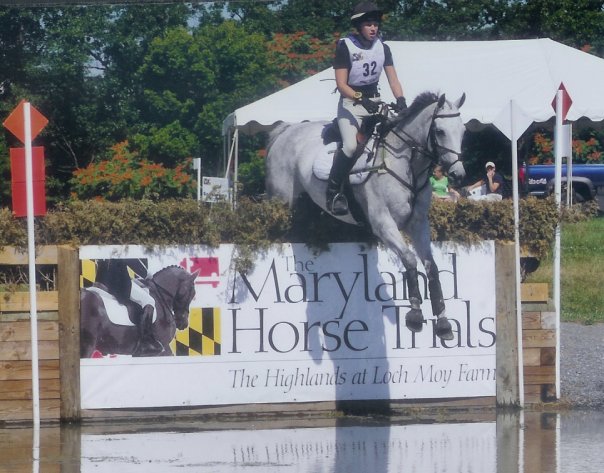 In 2010, Stephanie deployed with the military, and decided to lease Zane to a young rider, who did her first Preliminary on him. They rejoined in 2011, competing at the Preliminary level again. “I decided that as amazing as he was on cross country, he was best as a Prelim horse rather than Intermediate,” says Stephanie. Zane was leased out again for 2012, and reunited with Stephanie in 2013, when she realized that she wanted to do a full format event before they disappeared forever.  They completed the Preliminary 3-Day Event at the Kentucky Horse Park last year with a perfect and clean cross country round. Stephanie and Zane had now completed everything there was to offer at that level, including over 35 preliminary horse trials, a CIC* and a full format CCI*.

Zane is now leased to a junior rider on Stephanie’s farm, who gets the joy of dealing with his quirks and spooks daily. “I think he still has many years left in him. Even after 39 races and over 40 events at the upper levels he still has completely clean legs and has never yet had an injury that kept him out of work. I think his legs match his brain — they never really changed from his first season as a two year old on the track!”