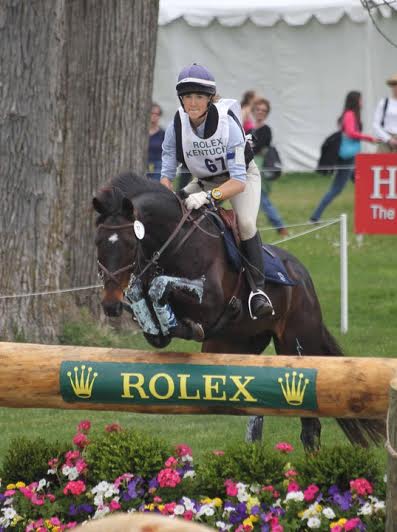 Tara Ziegler and Buckingham Place into the water at Rolex. Photo by Mike McNally.

Buckingham Place was born on Feb. 16, 1995, as a small bay colt with a star and a white left hind ankle. He went straight to the racetrack, running at Penn National Racetrack 36 times until the age of 6. The gelding only won five races, and eventually the decision was made to retire him because he bled through his Lasix medication three times in a row. He was ready for a new career.

Kim Ziegler and her 17-year-old daughter, Tara, were looking around the track for some resale projects, but were not coming away terribly impressed. Buck had raced the night before, and as he was led out of the stall, Tara fell in love with his handsome face and lovely conformation. They brought him home, and he started out his new life as an eventer.

Originally started by Kim, she was less than optimistic about his jumping abilities when he clobbered a railroad tie 13 times in a row one day. She turned him over to Tara, in the hopes that she could resell him to somebody at some point. As luck had it, Buck turned out to be an amazing jumper, and once Phillip Dutton saw him in a lesson, he immediately instructed Tara to take the horse off the market. 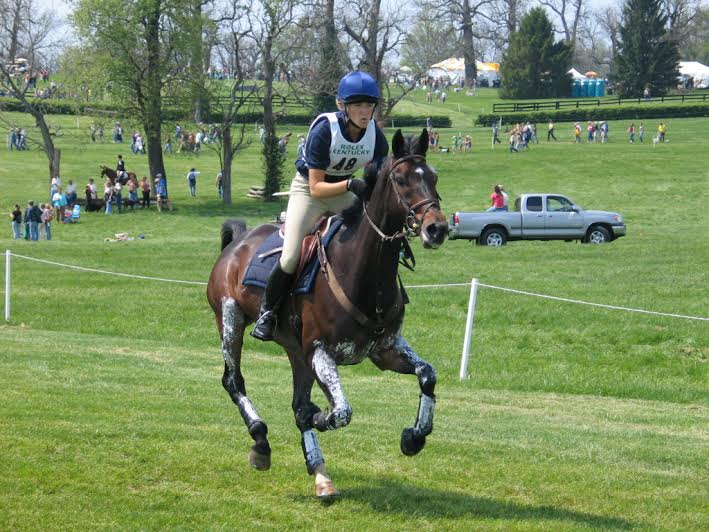 Tara and Buck galloping at Rolex 2007. Photo by Drew Bishop.

Although Buck was always an incredibly sweet and kind horse, he certainly had his quirks. He is still to this day fearful of inanimate objects, particularly poles on the ground. “Buck is incredibly narrow, and it’s like sitting on a fence rail,” Tara said. “In his early days, he could spin and wheel with the best of them. I must say it happened so fast that I landed on my feet a couple times!” Despite his baby moments, the gelding has been described as “a cat on a hot tin roof” over jumps and has an incredible lightness to him on the flat — when he decides to cooperate.

Buck also harbors an intense dislike of crowds, which backfires against him at big competitions in the dressage. “I think the biggest issue was always keeping him together despite his nerves,” Tara said. “We definitely lack stellar dressage tests anywhere with atmosphere.”

However, Buck progressed up the levels easily, and in 2006, he and Tara took on their first CCI3* at Fair Hill, finishing as the top under 25 pair. Shortly following that, they went to Rolex Kentucky CCI4*, completing in their first attempt at the level with just time and rails to add to their dressage score. “It was such an incredible experience to be in such an international atmosphere and gallop through the crowds and have them cheer you on,” Tara said. “Mary King did her first Rolex the same year as me!” The pair competed at Rolex three times in all, enjoying every moment of it.

Buck was the horse that carried Tara through her first pregnancy at the age of 25, and when she had her first child, Lucia, he took a short break to compete at the Novice level with a young Pony Clubber. In the spring of 2009, Tara took the reins again, and they won the Red Hills CIC3* together, winning the coveted Mercedes Benz in the process. Sadly enough, Tara was unable to take the car home, as she competed alone with only her 4-month-old daughter at her side and couldn’t get the car back home. 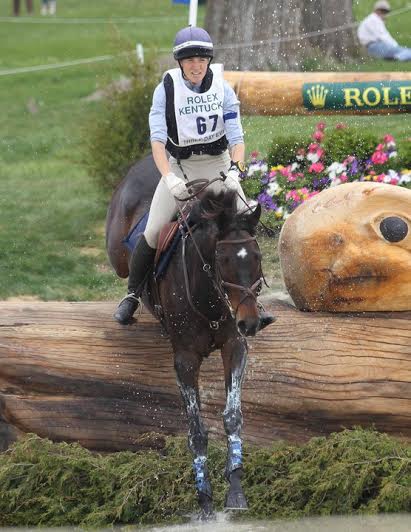 Tara and Buck through the water at Rolex. Photo by Mike McNally.

After that, Buck and Tara went to Rolex for one last time, but suffered an ugly fall on the down banks immediately following Oliver Townend. Both Buck and Tara were unharmed in the event, but that was the end of their four-star career together. “I had to make some hard financial decisions, and many said that Buck had taught me all that he could,” Tara said. “In the fall of that year, I leased him to a young rider named Amanda Silver, and he went on to take her to her first Intermediate competitions and her first CCI2*. I think he really enjoyed himself teaching her the ropes at that level with less pressure.”

After Amanda, Buck came back to Tara, and she made the decision to sell him to her friend Emily Bertrand in Canada. He is currently competing at the Preliminary level with her and hopefully will move back up to Intermediate in 2014.

“Buck taught me so much about balance and riding properly. I was able to have those ‘AH HA!’ moments with him that I’ve carried over to my horses now and certainly benefited from,” Tara said. “Buck kept me humble yet proud of the progress we made through persistence and perseverance. It has been great to see him content in his job and go on to be such a great teacher because he rewards you for riding correctly in his own completely innocent way.”