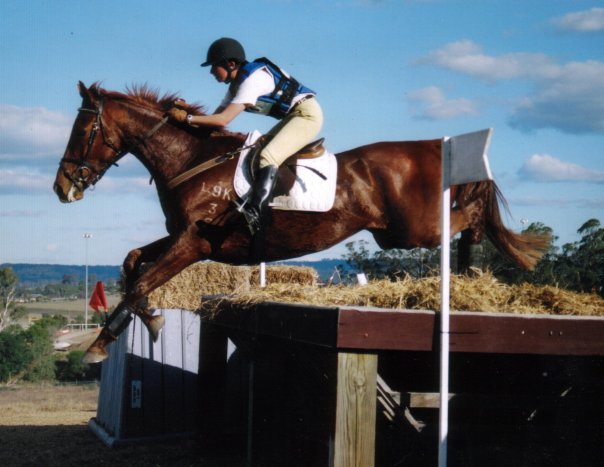 Kate and Danny at Camden Advanced. Photo by Winks Armstrong.

The year was 1992; the place was Queensland, Australia; and the horse was a tough little chestnut Thoroughbred gelding by Blue Sector. Bred and trained to be a country race horse, he came from scrappy beginnings. Although he was intended to race on the flat, Danny never made it to the races but instead was purchased at a young age as a pleasure horse, and brought home by Toni Cormie to become a riding horse.

One day at the Woodford Pony Club, a young Kate Chadderton was searching for her next mount and happened upon Danny, a young Thoroughbred with no official training. She loved him from the first second she saw him and only had to sit on him for a few minutes before deciding to lease him. Once this was settled, she rode him home! “The riding him home was necessary, as at that point we did not own a truck or trailer,” Kate said. “The ride was about two and a half hours at a trot with Mum following along in a car behind us.” At the age of 14, she’d found her first big-time horse. 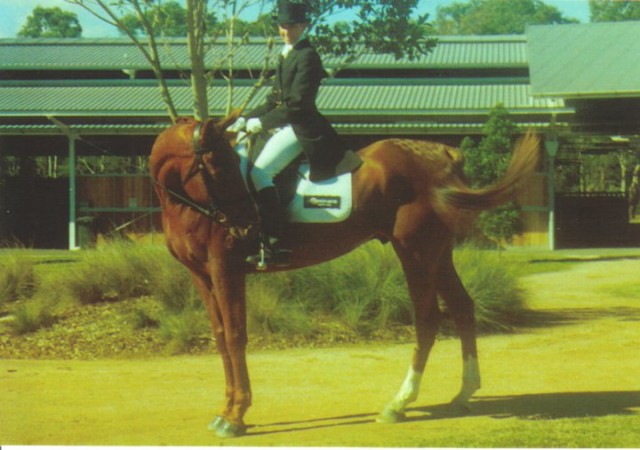 Kate and Danny at their first three-star. Photo by Dorne Chadderton.

Danny was generally a happy, generous and fun horse both on the ground and under saddle. Kate rode him at Pony Club and did a lot of “bush bashing,” or exploring the wilderness with him. They swam in the dam together; competed together at the local shows; and Kate continued to ride him everywhere, as she still didn’t have a truck or trailer.

“While Dan was an absolute angel, he did have a boisterous buck and a wicked sense of humor,” Kate said. He routinely pitched fits when other horses knocked rails in the show jumping warmup and also pretended to be frightened of other horses occasionally, using this as an excuse to buck her off.

After attending college, Kate decided she wanted to ride full time but realized that she wasn’t good enough to compete against the professionals. She packed up and took a few hundred dollars and her horse down south, near Sydney. Kate ended up working for a young, handsome, up-and-coming rider by the name of Boyd Martin. Starting her job at Training level, Kate went to her first CCI*, CCI2* and CCI3* under Boyd’s watchful eye. They were based with Heath and Rozzie Ryan, and after finishing her time with Boyd, she stayed at Heath’s barn for quite a few more years. 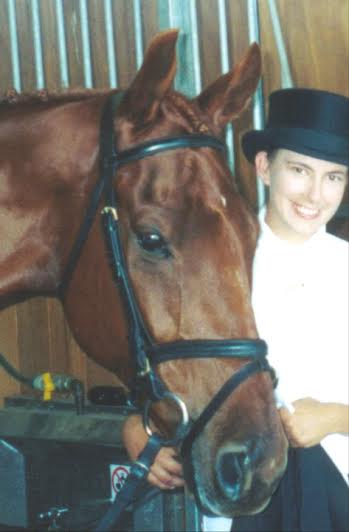 “I didn’t win anything major because I made way too many mistakes for that,” Kate said, “but I learned so much with that horse.” One year at the Sydney CCI3*, Danny hit the last fence on cross country and tried valiantly to continue galloping; however, Kate popped off between that fence and the finish line, much to her chagrin. Together they both competed at Prix St. Georges in pure dressage and learned canter pirouettes, tempi changes and a real extended trot.

When Kate decided to move to the U.S., she sold Danny to a young rider named Elise Armstrong, who competed him through Training level before allowing him to retire at her farm. “Danny really gave me the life that I live now,” Kate said. “He took me from the outback into the most prolific barn in Australia, enabling me to meet my idols, compete against them and eventually become their friend.” These days, Danny is retired happily in Australia, spending the majority of his time eating and hanging out.