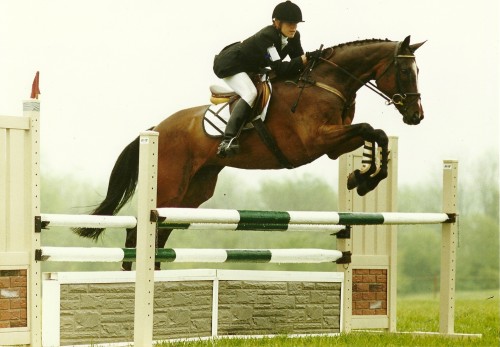 In 1985, a striking bay thoroughbred was born, and destined for the race track, he was registered with the jockey club as “Foolish Doll”. After his second year of life, it was determined that he was unlikely to make a profit in the racing world, and was offered for sale for a measly $500. He was luckily found by Virginia Benz Shemonic, a notable breeder in Illinois, who jumped at the opportunity to take him home and let him grow up a little in her fields at Rose Wood Hill Farm.

The gelding was gangly and huge from the start, standing at over 17 hands in his three year old year. He started his retraining slowly, but was soon realized as a great talent, and sent to Jill O’Donoghue to introduce him to Eventing. “Leggs” as he was known, was rechristened as High Tech, and began his career in Eventing in earnest in 1990. He quickly took to it, moving up the levels and placing 4th at his first CCI* at Radnor in 1993.

In 1994, Jill’s trainer Ralph Hill liked the horse so much that he took over the ride, and campaigned him at the Intermediate level, and the pair finished 11th at Bromont CCI2*. Unfortunately, that fall Leggs had what can be considered a career ending injury, and tore a hind suspensory ligament while on course at a horse trials. He was sent home to Virginia, who took him back and let him rest in her fields again. 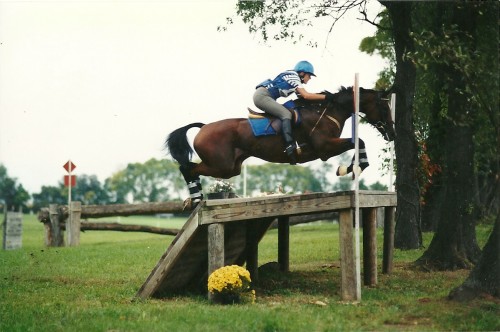 As he was still a young horse, Virginia was unable to give up hope on Leggs. After several years of rest, she offered him to a friend’s daughter as an experienced mount to rehab and compete. Natalie Hollis was elated at the opportunity, and as she was about to begin a working student year for Phyllis Dawson, the timing could not have been better. She got him back into work, but sadly one month after their arrival at Windchase Farm, Leggs was attacked by his own blanket, and shattered his splint bone in the ruckus. Leggs had surgery to remove the chips that they could, and was relegated to about 8 months of stall rest.

“He was a little accident prone, yes,” says Natalie, “but he was also really tough. He came back from that injury in 1998 as sound as ever!” Indeed Leggs returned to competition that year, kicking it off with two wins and a third place at Preliminary as his first competitions. Natalie and Leggs moved up to Intermediate, and subsequently to the Advanced level, with many great placings at both the national and the FEI levels. They won a CIC2* at Morven Park, and were 8th in a competitive division of Advanced at Fair Hill in 2001.

When asked about her favorite memory of Leggs, Natalie said that one stood out in her mind. “At the Radnor CCI2* in 2000, we were well placed after dressage, and going clean around the cross country until Leggs decided to attempt to clear an irish bank instead of jumping on top. Unfortunately, we both skidded off and I fell, but Leggs got up and took off galloping,” she remembers ruefully. “I ran after him, because at that time you could still get back on, and I finally caught him and had to gallop back to that jump and finish. We jumped all the straight routes and finished clear…. minus about 80 time penalties!”

Like a great Thoroughbred, Leggs jogged up perfectly sound the next morning after that episode, while Natalie was nursing a broken foot. She shortened her stirrup on the broken side, managed to get her boot on, and finished with one of the few clear rounds. 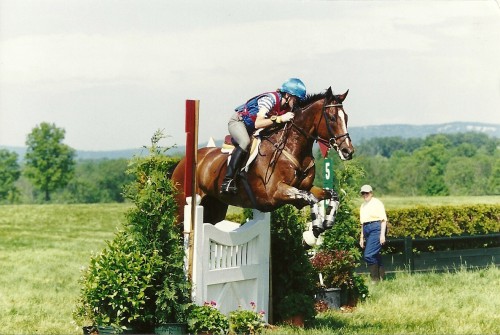 Sadly, after many years of upper level competition, Leggs was injured again at a CCI2* at CDCTA, when he was preparing for a fall CCI3*. Directly after their clean cross country round, it was determined that Leggs had severely injured a tendon, and Natalie was crushed. “I blamed myself and wished that it was me who was hurt instead of him,” Natalie remembers. “I felt like I owed him so much, and I just didn’t want him to ever be in pain. I’d have done anything for that horse, and that final injury weighed heavy on my shoulders for a long time.”

Leggs returned home with Natalie and she diligently rehabbed him. Within a year, he was sound again, amazingly. However, at the age of 17, she realized that his prime was behind him and attempted to retire him, but Leggs had other ideas. “He was bored out of his mind, he needed a job,” So Leggs became a Beginner Novice through Training schoolmaster for several of Natalie’s students until he was 23.

“Leggs just loved every part of it. He was the ultimate event horse. He loved going out there to show off, he clearly thought that everybody was there to see him. He had so many injuries that should have kept him down, but he had so much heart that he just kept coming back,” says Natalie. At age 23, Leggs colicked at night. After much deliberation, Natalie decided that it was best to lay him to rest, and end his suffering. “I’ll always be grateful that I got to be part of this very special horse’s life. He was one in a million.”