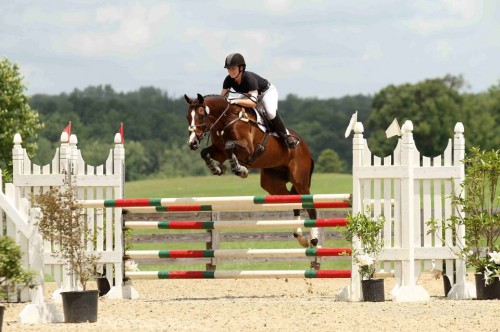 Kristin and Trance at the AECs. Photo by HoofClix.

In 1998, a bay colt was born and named Mr Andrew, registered with the Jockey Club and fated to be a racehorse. He ran only four times in southern Louisiana and made a measly $1,080. His racing comments included “unhurried” and “little impact.” The gelding left the racetrack to find another career, only to be sold to a horse trader looking to sell him to the slaughterhouse.

In 2002, Kristin Carpenter was searching the classifieds section of her local Louisiana newspaper and was finding only Quarter Horses for sale. On Valentine’s Day, Kristin saw an ad for a “16.3 brown TB,” and she jumped at the chance to go look at him. The gelding was living in a backyard with a fat black pony and had unsuccessfully been trying his hand at barrel racing. “I fell in love with his face instantly,” Kristin said. “I was young and stupid, so I didn’t vet him, paid my $1,200 and took him home. I thought that since he was pretty, I could re-sell him as a hunter and finally afford a ‘real’ event horse.” Kristin was 17, and the gelding was 4.

Newly renamed “In A Trance,” the young Thoroughbred turned out to be a handful. He had a bad habit of rearing, and when introduced to jumps, he simply bolted at them. Kristin enlisted the help of a cowboy to introduce ground manners to Trance, and he became marginally more reasonable. She even went as far as to sign up for a Jim Graham clinic, but it took six attempts to get Trance to jump a Beginner Novice rolltop. Kristin remembers Jim saying, “That horse has a world class jump, but you gotta stick on him like a tick on a dog!”

From that interaction, Jim offered Kristin a working student position, which she initially declined but decided after a few months that she needed a break from school, and in 2004, she and Trance went to Jim’s farm. “I couldn’t sit the trot, and when I got Trance to canter, I couldn’t stop him. It was a disaster!” Kristin said. However, Jim believed in them, and told her on the third day that her first event was in two weeks, going Novice at the Kentucky Horse Park. 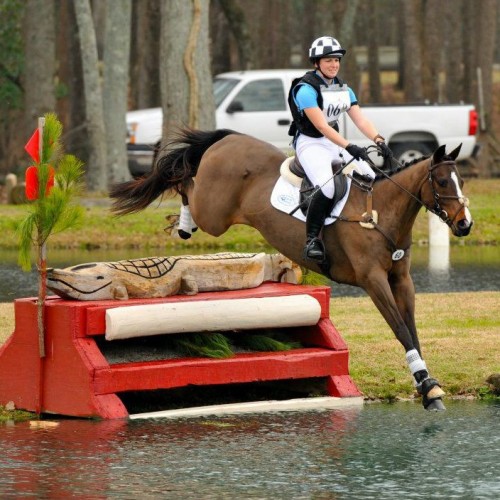 Kristin and Trance into the water at Pine Top. Photo by HoofClix.

Their first dressage test was filled with bucking, rearing and panicking from both parties. “The judge actually came out of the box and asked me if I had a trainer, and I didn’t tell her he was an Olympic selector,” Kristin said. However, Trance completed his first cross-country course with only one stop and put in a foot perfect clean show jumping on the last day. Kristin had herself an event horse.

Trance and Kristin continued to move up the levels, eventually completing two long format CCI*s and a short format CCI2*. He thrived in the long-format event, but when the format changed, he had to be more competitive on the flat, which was a constant struggle. “He has terrible natural movement and no suspension whatsoever,” Kristin said. “For us, dressage literally was the total improvement and transformation of the horse’s gaits. He worked so hard his whole life, and he became competitive on the flat from his heart and determination.”

The pair competed at NAJYRC in 2005 and brought home a team bronze. However, upon returning to Louisiana, Kristin and Trance were amongst those hit with Hurricane Katrina. Trance blew out 65 percent of his deep digital flexor tendon in a paddock accident during the hurricane and had to be immediately retired. Kristin returned to school and Trance was without a job for the next five years.

In 2010, they both moved to Virginia, and under the urging of her coach Skyeler Icke Voss, Kristin took a second look at the tendon, and slowly brought Trance back into work in May. He kept staying sound and looking better than ever, and in June of 2011, they smoked around the Bromont CCI2*. In the fall, while preparing for Fair Hill CCI2*, Trance was administered some Tildren, and he was the first horse in the U.S. to have the one in 1,200 chance of going into renal failure. He spent 18 days in the ICU, but fought his way back to health. 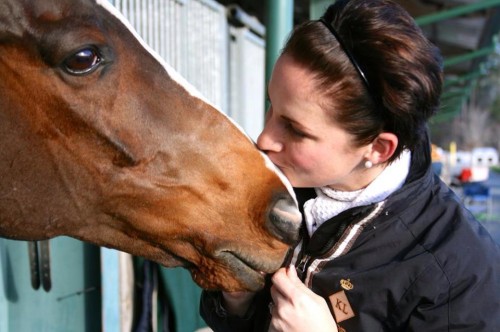 After this, Trance and Kristin competed twice more at the Intermediate level, but small things kept cropping up, and Kristin made the decision to retire him to a lower-impact job. Skyeler helped her find the perfect family in the Pitcher family and the two younger daughters who competed him at the lower levels. He spends his days spoiled rotten and occasionally breaking lose to gallop around the farm and give his mother a heart attack.

“Trance has taught me that the odds don’t matter. I grew up in an area where there is no real eventing, with a family who did not understand the “horse thing” or have the means to really support it. I wanted more than anything to go to the North American Young Riders Championships, and I wanted to compete internationally, and I had no reason to think I ever would. Against all the odds, and due to so much random luck and opportunity, I did those things with him,” Kristen said.

“He taught me that you can be considered broken, and you can be counted as done, and with a little time and patience, you can still achieve your dreams. The horse must have nine lives, and he has certainly used all of them, but he has found what he loves in life and will do it until the day his legs will no longer work.”