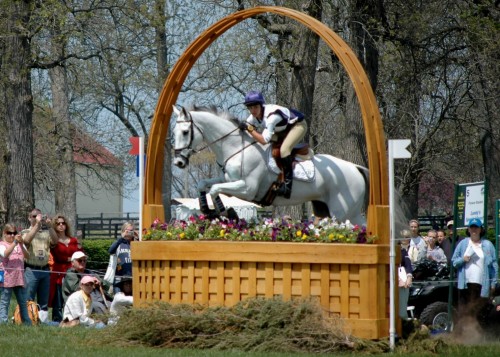 Lynn and Fergus at Rolex. Photo by Dana Voorhees.

A dark grey Thoroughbred colt was born in West Virginia in 1992 and registered with the Jockey Club as No It Tissant. Out of Yes Tis by Admiral’s Flag, he gave racing a fair shot, running at Charles Town, Philadelphia Park, Garden State and Laurel Park. The colt raced 24 times in all, winning three times, placing second three times and finishing third once. He earned $16,675 before retiring to the life of a sport horse.

Julie Gomena found Fergus and transitioned him into the world of eventing. They competed through Training level successfully, and at age 5 Fergus found himself for sale as an athletic and brave prospect. A young Lynn Symansky came to try him out, and at only 14, she was a little hesitant about purchasing the bold, young horse, despite the urgings of her coach Michael Mendell.

“All I can remember is that he felt incredibly powerful, and all I could do was point him at the jumps and try to hold on,” Lynn said. “He was insanely brave, almost to a fault. It was pretty typical for him to leave a stride or two out of most combinations until I was strong enough and educated enough to ride him better and know how to change his canter.”

While Fergus was more than willing and incredibly quick off the ground, he had an unconventional jumping style, hanging his front legs no matter the height of the fence. The Symansky family took Michael’s advice, despite some concerns from other Pony Club members, and bought the horse that would change Lynn’s life.

From the very beginning, Fergus was pushy and opinionated — both on the ground and in the tack. He has very little patience for anything, and has been certain from day one that he is king of everything that surrounds him. When Lynn tried to work on his strange jumping technique through the use of grids, he simply outsmarted her, no matter how many rails, circles, transitions or different distances she set.

“The only thing that seemed to slow him down was having my mom stand at the end of the line, and we would come straight at her and she would run out of the way at the last minute,” Lynn said. “Thanks, Mom, for risking your life on multiple occasions.” While Fergus’ insistent and bossy personality was difficult in the beginning, it made him into one of the best cross-country horses alive. He thought he ruled the world, and nobody would stand in his way. 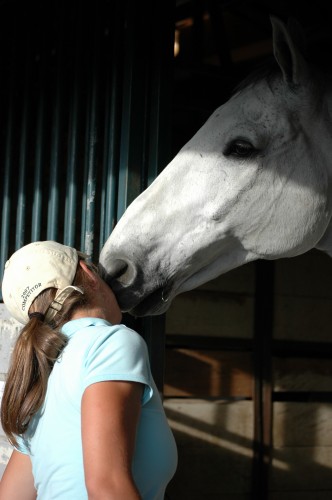 Lynn and Fergus sharing a moment. Photo by Dana Voorhees.

While Fergus positively lived to run and jump, he developed a distaste for dressage despite having natural talent in the arena. When Lynn showed up at Radnor CCI2* in 2001 for their first attempt at that level, he morphed into a beast and went absolutely wild in the dressage arena. Shortly thereafter, they moved up to Advanced, and Fergus got a real taste of the upper levels and big cross-country courses. He experienced real fitness for the first time in his life and lost all respect for the dressage.

“I think if I had him right now from the beginning, he would have turned out differently,” Lynn said. “I had no idea what I was doing. I was still a teenager when we were running around CCI3* events, and we were both learning together. On lucky days, I was able to score in the 30s at Advanced. On unlucky days, we saw FEI dressage scores in the 80s.”

Lynn tried all the regular tricks: multiple rides, no rides, lungeing, one-and-a-half hours of warm up, no warm up, five tests in a row at a dressage show, jumping right before the show and doing dressage in her jump saddle, but nothing seemed to mitigate Fergus’s wild antics. Despite these struggles, Lynn and Fergus moved up the levels quickly, and the pair completed their first CCI4* together at Rolex in 2007.

Due to a minor setback just two weeks before Kentucky, Fergus was relegated to walking hills for hours each day leading up the event, and only got the go ahead from Dr. Kent Allen the day before the first horse inspection. Lynn had a terrible time convincing Fergus to take his time around the cross-country course, but they jumped clear with time on Saturday and returned on Sunday to deliver another clear round in show jumping. “I think it turned into a great weekend because my expectations were quite low, and our end result far exceeded that, and I was also lucky enough to be sitting on one of the best cross-country horses in the country,” Lynn said.

In 2008, the pair returned to Rolex feeling much more prepared. This time, they made the time on cross country and won the award for the best conditioned horse. “There’s nothing better than a bold, confident OTTB to do your first CCI4* on!” Lynn said. “I would give anything to have another cross-country horse as game as him, and I hope one day that I’m able to find something as incredibly bold and honest as he was.” 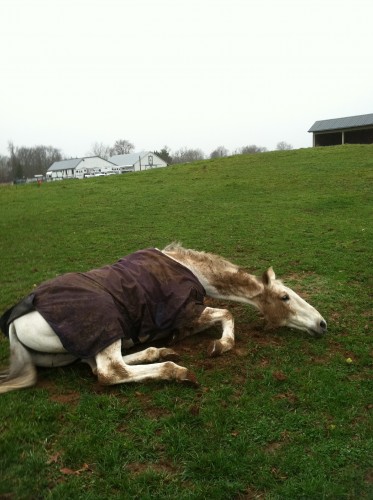 Fergus changed Lynn’s life. He taught her some of the most important lessons in eventing and the horse business as a whole. While he was difficult in the dressage, he taught her to stand up straight even after a horribly embarrassing test and gather her wits for the cross-country ride of her life.

As an accident-prone horse, Fergus taught Lynn that not making it to a certain event was not the end of the world, even if it was a three-day. He was always bossy and rude on the ground, and now Lynn realizes that part of it was because she didn’t work with him enough on the groundwork, and now she is diligent in teaching even the most quirky horses basic ground manners.

Fergus’ fearlessness on the cross country injected Lynn with her own confidence. This feeling is one that she never forgot and still works to create that in all of her horses. “Fergus really taught me horsemanship,” Lynn said. “He was always getting injured in weird ways, and he showed me that I shouldn’t take a day for granted. However, I had to be really careful about how I trained, competed and conditioned him, which was hard because he was my only upper-level horse, and I needed the practice. I learned how to get the most out of every second spent in the saddle.”

At 17 years of age, Fergus retired from the upper levels. He taught both Retsy Holliday and Cara Goode the ropes at the preliminary level, which was amazing for Lynn to watch. Sadly, he was injured less than a week away from his CCI* with Cara, and Lynn decided to fully retire him. He now lives on Lynn’s farm, fully sound and muddy as all get out. He keeps himself busy by bossing other horses around and galloping laps around the field in the morning.