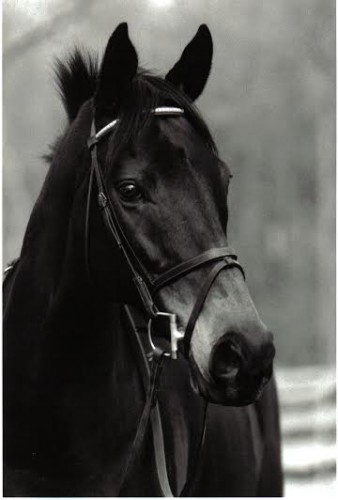 “Pickle Road is a bumpy dirt road in Pottersville, New Jersey. Pickle Road is also that name of a 17 hand plain bay Thoroughbred gelding who was born at Merrywind Farm on that very road in 1990. Pickle’s life has been much like his namesake, full of twists and turns and many bumps, but the views can be amazing!!” says Heather Gillette. Pickle was royally bred, by Cormorant out of a mare named Choice of Power, and his owners sent him to the track hoping for winners circle glory. Sadly, the gelding only managed to win $8,600 in flat racing, and when he tried his hand at steeplechasing with Janet Elliot, he failed to stay sound. In 1994, Pickle was sent home to Merrywind, officially retired from racing.

Heather Gillette happened to be riding a horse for a friend at the farm, and took pity upon the forlorn looking four year old, and began to slip him carrots on the sly. Their friendship blossomed despite Pickle’s aggressive attitude in the stable. “He would gnash his teeth and make threatening faces that struck fear in just about everyone,” remembers Heather. “The farm manager at the time told me to stay away from him, because he was ‘the rankest horse in the barn and he would tear me up!'” Heather decided the accept the challenge, and armed with carrots, apples and peppermints, she began to stand in the stall with him, letting him battle with his inner desire to be grumpy and at the same time his intense lust for treats.

As Heather was the only seemingly willing candidate, she was asked to sit on him. Pickle began life as a sport horse in a wild way, but began to make slow and steady progress towards civility. His athleticism was unmistakeable, and Heather scraped together $2,600 to buy him, and decided to quit her ‘real’ job in order to focus on training and competing Pickle. In 1996, Heron’s Landing Event Team was born, all due to Pickle.

Pickle was a difficult ride from the beginning. Heather describes him as a “big time worrier, who became a blithering idiot if he thought he was in trouble”. He was absurdly barn sour, and only good to hack out if you were heading away from the barn. While he stayed grumpy in the stables, he was always very sweet and quiet with children and small animals, routinely sleeping with one of the barn cats. 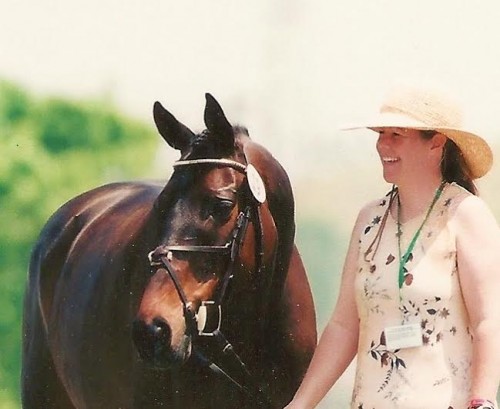 Pickle and Heather at Jersey Fresh. Photo by Eric Nichols.

Despite his tricky nature, Pickle took to eventing like a duck to water. He began competing with Heather as a five year old, and only a year later he was second at the Essex CCI1*, and moved up through Intermediate and right on to Advanced by the summer of 1998. He finished that year with an 18th out of 68 at the Fair Hill CCI3*, after only four other starts at the Advanced level. Heather was swamped by offers to buy him after cross country that weekend, as the Sydney Olympics in 2000 were looming and Pickle’s performance had been outstanding. However, she politely declined and took her eight year old thoroughbred home for a winter’s rest.

In 1999, Heather and Pickle were invited to participate in the Developing Riders training sessions in Ocala, and she was thrilled to see all her hard work paying off. “My dream of representing my country seemed possible, but I was going to have to find some serious cash,” says Heather. “How was I going to do this amazing horse justice? He needed to play on the world stage, everyone said he had the quality to do so. But how?”

Heather was inundated with offers to buy Pickle, but she simply couldn’t part with him. In response, she put a completely unreasonable price on his head, and the calls stopped. However, on December 30th, a phone call came that accepted the price on Pickle’s head and wanted to come try him. “After much soul searching I came to the conclusion that I was not going to be able to afford to make a team run. I wanted Pickle to be the international star I knew he could be,” remembers Heather. “I had struggled through his quirkiness when some folks thought I was crazy. He was a fantastic horse and I wanted the world to know, so I decided to sell him to a program with all the tools to get him there”.

In March of 1999, Heather drove Pickle to his new home, crying the whole way. She had written a guide to everything Pickle, titled “How To Keep Pickle Sound and Happy”, which she gave to his new owners. Sadly, the new owners disregarded the all inclusive manual, and were never able to compete Pickle at all.

In 2001, Merrywind Farm’s owner Kathleen McDermott heard that Pickle was looking for a home. He wasn’t sound, and needed a place to rest. Pickle Road returned to Pickle Road, and Heather was there the day he arrived to say hello. A deal was struck, and Pickle came home to Heather once again. With her special knowledge of everything Pickle, he was sound again in two weeks.

The two began competing again, running a few Preliminary events and moving back up to Intermediate. Heather broke her hand while aiming for Fox Hall in 2002, and Stephen Bradley took over the ride, and blazed around the cross country. Afterwards, it was discovered that Pickle had a sliver of bone dislodged near his fetlock joint, so off he went to have surgery, recovering well afterwards. 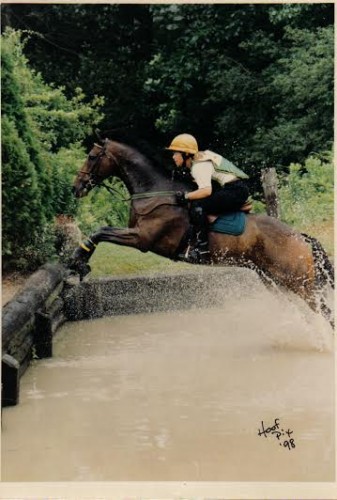 At Millbrook in 2002, while running the Advanced, Pickle made an uncharacteristic mistake at the double bounce banks up, and Heather and Pickle flipped. While walking back to the barns, he became very lame indeed, and the vets thought that he might have broken a shoulder. However, it became apparent that he had torn his biceps tendon in his shoulder, and through Heather’s patient approach, was able to come sound again.

After falling victim to the FEI qualifications rules, and various little niggling injuries, Heather and Pickle were still kicking on together. In 2006, they were 2nd at The Fork CIC3*, had a top ten finish at Jersey Fresh CCI3* and finished the year as the USEF Silver Stirrup Award Champion at Advanced. In 2007, a suspensory injury prevented them from attempting Rolex, despite Pickle’s energy and enthusiasm. In 2008, Heather made the decision to retire him at the age of 18, in order to preserve his soundness and happiness.

Turned out in a field to enjoy his retirement, Pickle decided that he was bored and convinced all the other horses to play Kentucky Derby in their free time. In 2009, Pickle had two field accidents related to careening around, fracturing a large piece of bone in his shoulder and finally breaking a two inch piece of bone which secured the ligaments that hold the stifle together. Despite worry from the vet, Pickle seemed happy enough, eating and drinking and defying the odds on a daily basis.

After 7 months in the stall, Pickle had healed, incredibly enough. He still spends his time out in the field that he grew up in as a weanling, and yes, he still tears around the field like a maniac with all his fuzzy and fat retired friends. “I get to see his face every day, and I am so thankful to have had him in my life nearly twenty years. He epitomizes the greatest characteristics of an OTTB. Athleticism, heart, courage and an undaunted and indomitable spirit. It has been my great privilege to be part of this horse’s life! It has all been gravy!”