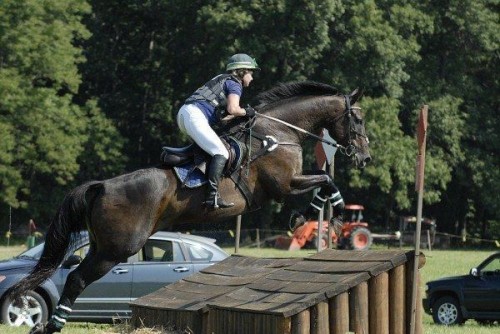 The Shaq Attack over an Intermediate cross country fence. Photo by Carlos Gonzalez.

Twenty years ago, an enormous dark bay colt was born, registered as Right On Spruce, and sent right into training as a Thoroughbred racehorse. However, due to his size, he was unable to race until he was 3, and even then his showings were not promising. After 12 starts, only one win and total earnings of $1,200, the colt was retired from racing and shipped off to Maryland to find a new job.

“I got a call from my trainer, who said she had found a horse that was just my type,” Erica Davis said. “I went to see him, and he was absolutely huge, over 18 hands, and he had this awful pencil neck. He was so gangly and ridiculous looking, but I got on him and rode him around and popped him over a cross rail. I knew right then that he was a special horse.” Erica renamed the gelding The Shaq Attack due to his enormous size and brought him right home.

Shaq began his training to become an eventer and instantly garnered a fan club. He was extremely recognizable due to his stature, and his gentlemanly ways won everyone’s hearts. However, in his 4-year-old year, Shaq was diagnosed with EPM, which at that time was a largely untreatable ailment. “I ignored all the advice to put him down and sat down on the computer and researched different trial treatments available,” Erica said. 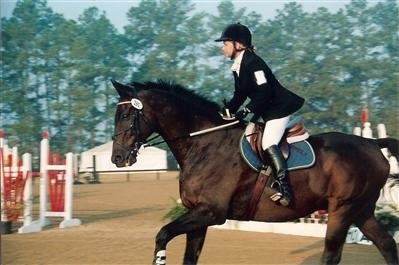 Erica & Shaq at the AECs (photo by Karen Hecker)

Her dedication to Shaq payed off; through a little luck, her vet was able to obtain an experimental EPM medication from Canada. This medication, a chicken antibiotic that later became Marquis, had very little proven efficacy at the time. Erica dutifully fed Shaq a pound and a half of powdered medicine every day for a month and hand-walked him through the woods and over logs to help his muscles regain some coordination. After a full month, Shaq was recovered, and Erica was elated.

The next year, the two of them began their eventing career together. Shaq was not overly fond of the dressage phase, as it was quite difficult for him to fit his large body in the tiny arenas. However, he more than made up for that with his enthusiasm for the jumping. “In stadium jumping, as we would canter around, Shaq would get so excited about jumping that he would strike out with his front legs and squeal like a pig.” As you can imagine, he was hard to miss at a competition, and his fan club grew.

Erica and Shaq steadily moved up the levels from Beginner Novice to Intermediate. They both learned the levels together and were extremely successful the whole way. Shaq positively adored the cross country, eating it up easily and galloping around with the happiest expression on his face. He was a total machine and never once had any cross country penalties. 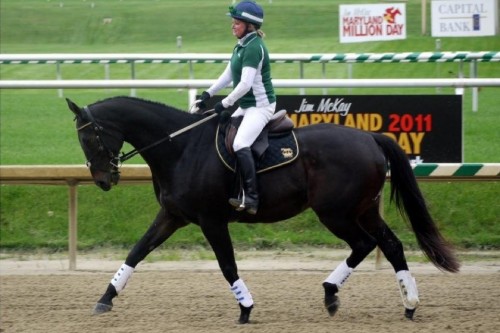 The bond between Erica and Shaq is the stuff of legends and is proof that the Thoroughbred heart simply cannot be matched. “I’m very proud of my accomplishment of bringing a horse off the track up to Intermediate level. You don’t have to find a made horse, and you can be an amateur and still achieve your goals,” Erica said. “These horses off the track are well worth the effort.”

As for a memorable Shaq moment, his rider had a hard time picking just one. While she was competing at Waredaca one weekend, Shaq slipped going up a bank and Erica just popped off the side. She lost her reins and Shaq decided to head back to the start box. “He went back the exact same way he had gotten there, including jumping all the jumps backwards,” Erica said. “I had to get a ride on a golf cart back to the start box to get back on him and return to the fence where I fell.” Erica remembers the time fondly. “That horse really loved jumping cross country.”

At the age of 18, Shaq started to slow down a little. He developed some minor issues associated with old age, and Erica decided it was best to retire him from upper-level competition. Shaq now enjoys keeping younger horses in line and continues to trail ride and get attention daily. Recently he represented OTTBs at the Maryland Million Race Day at Laurel Park, and Shaq was more than proud to show off for a huge crowd. He never lost his polite and gentle demeanor, and Erica will always consider him her horse of a lifetime.