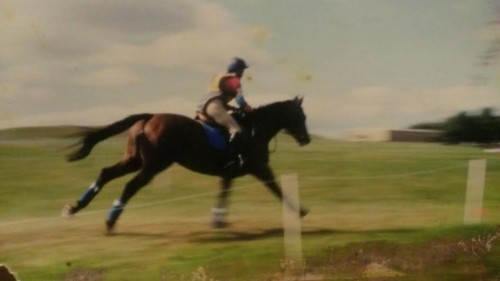 Sabrina Morris and Donald on steeplechase in the 2000 Morven Park CCI*. Photo by Sallie Morris.

In the year 1990, Pretty Woman was the most popular movie of the year, the Red Hot Chili Peppers were just hitting their stride, and a plain bay Thoroughbred colt was born, registered Time For One More with the Jockey Club. The colt was born on January 16th, and was by the stallion Honest Pleasure out of a mare named Sovranna by Sovereign Dancer. While his bloodlines were a touch inbred, he still harbored hopes of being a successful racehorse. Sadly, this was not to be, and after several poor finishes and a strained suspensory, he was taken off the track and thrown into the back forty by owner Kevin Bowie.

Kevin was one of the first female jockeys in the United States, and after a few years, realized that this plain bay gelding was still sitting in the field. She pulled him out and decided to put him to work, letting him become a project for some unsuspecting working students. Colleen Rutledge was a working student for Kevin, and managed to bring her twelve year old little sister to work with her one day. Sabrina was jokingly assigned the task of catching and tacking Donald, which resulted in a long chase around the field and a series of wrestling matches to apply tack. Donald was well known around the barn for removing riders by squealing and levitating, rearing and cracking his riders in the face, but Sabrina didn’t know any better so she hopped on. “I took him into the arena and began flopping around on his back like a monkey, when I realized a crowd had formed at the ring to watch me,” remembers Sabrina. “I jumped him around a little course, all grins”. 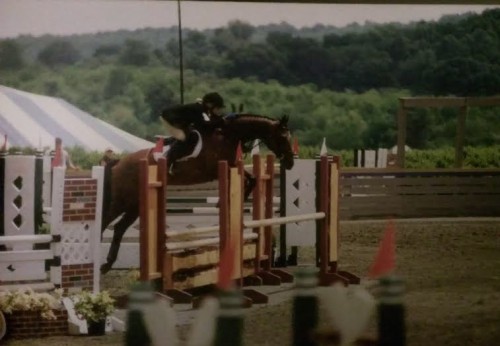 Donald in the Commonwealth CCI* in 2001. Photo by Coy Morris.

The two seemed fated to be together, and Sabrina set about buying Donald through a payment plan. Donald was certainly a learning experience for the young rider, and not many people could rave about his good behavior. He was very fond of squealing at other horses, and at unwelcome spurs. He had a habit of breaking free of his stalls and running away from hand walkers, only to gallop around the show grounds wreaking havoc wherever he went. Donald was a handful, to say the least.

While Sabrina dealt with learning how to ride Donald’s unpredictable personality, he developed an issue with water jumps early in his career. After misjudging a very full water complex during a pony club schooling outing, both Donald and Sabrina went fully underwater, and the gelding never quite forgot it. “I took lessons from top trainers, all telling me to ride differently, but in the end it was about his confidence and not the way I rode to the fence,” says Sabrina. “I learned to think outside the box. I hunted him in the off seasons, and then I got the idea to take him swimming in the river”.

Her persistence and unusual methods payed off, as Donald’s confidence grew and they moved up the levels together. At the age of 16, Sabrina entered her first CCI* long format event at Morven Park. Without the aid of a groom, Sabrina completed the event, went clean on cross country, won the fitness award and finished seventh individually. The pair went on to complete three more long format CCI* events, as well as several seasons of Intermediate horse trials. When they weren’t Eventing, Sabrina and Donald tried their hand at point to point races, even winning a few times. 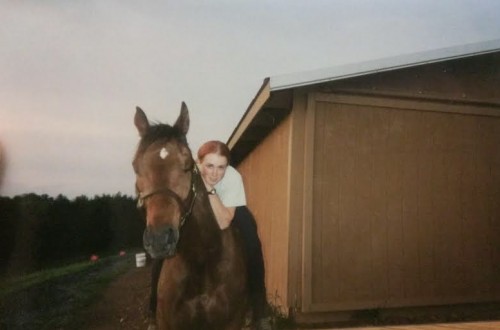 Sabrina and Donald hanging out around the barn. Photo by Sallie Morris.

However, after a freak accident in the Show Jumping at the Virginia CIC2* before NAJYRC, Donald was injured and eliminated from the competition. Sabrina, in the meantime, moved from Maryland to Florida and rehabbed her beloved horse. He recovered well, and went on to win an Intermediate division at Rocking Horse, but she felt like he wasn’t 100% sound. “He ran so hard for me, for so many years, so I shipped him back to my mom’s farm in Maryland for some serious time off. He was never lame but I also didn’t want him to get that way because I was simply greedy.”

Donald went on to take a junior rider to her first Training three-day, and an adult amateur through Training level as well. He’s been a lesson horse for both beginners and experienced riders for years now, and lives in a semi-retired state in Maryland. Sabrina gets the chance to ride him on the trails every once in a while, and he still squeals and canters sideways down the paths.

“While I was competing him, I was told that he’s not fancy enough, not a good enough mover, he’s not professionally trained or a tidy jumper. But Donald didn’t know or care about any of those things,” remembers Sabrina. “We won our fair share of events, but we also got eliminated too. Life isn’t always about doing well. Life is about accepting who you are and being the best you can be, and appreciating the personality that God gave us all”.