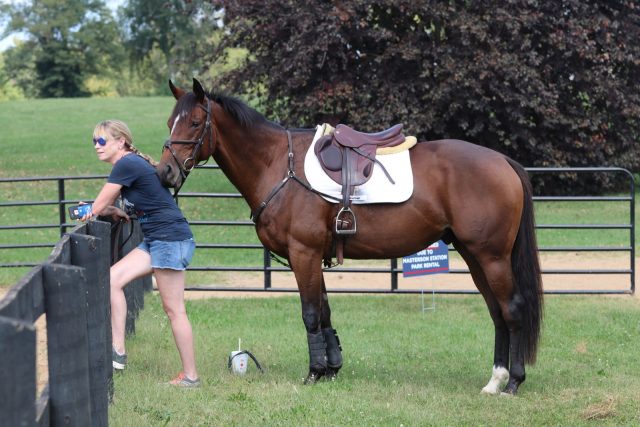 Fifteen of the over 400 entries for next weekend’s Thoroughbred Makeover at the Kentucky Horse Park came to a preview Tuesday afternoon at the Masterson Equestrian Complex here in Lexington. We saw barrel racers, field hunters, eventers, jumpers and dressage horses, and of course they all have one thing in common — they’re all former racehorses with less than a year’s training off the track under their belts.

Next Thursday and Friday 5th and 6th October will be the discipline specific competitions, taking place at the Kentucky Horse Park — some in the old indoor arena, the jumpers in the Walnut Ring, the eventing and field hunters out on the cross country — and the top three will be selected in each division. That is free and open to the public once you’ve paid your horse park entry fee.

On Saturday 7th October the top three in every discipline return to the indoor arena to try and win the coveted title of ‘America’s Most Wanted Thoroughbred’ awarded to the supreme champion of them all. Tickets to attend this are $25, but $15 for RRP members and children, and there will also be a live streamed in case you can’t make it in person.

And that’s not all … if you’re in the market and one of these catches your eye, almost half of them will be available for sale on Sunday 8th October. You can find all the details on the RRP website.

With $100,000 of cash and prizes to give away, the Thoroughbred Makeover is the richest racehorse retraining competition in the world, and the competitors are coming from all over the USA and Canada.

But let’s get to know a few of the Kentucky entries better.. 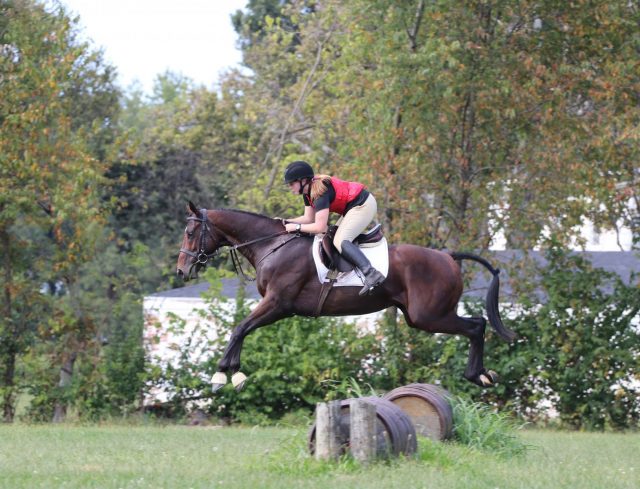 Bobbie Jones got Proud Royal from Winchester Place Farm last November thanks to a friend’s recommendation. Bobbie events and is a pupil of Cathy Weischoff’s (last year’s eventing winner) but she’ll be contesting the Field Hunter division next weekend. “I wanted to try something a little different and he’s game for anything!”

This is Bobbie’s first time doing the Makeover, and she reports that training so far has been fairly straight-forward. “He’s been really good, he’ll jump anything, he’s super-brave.” Proud Royal’s former owners at Winchester Place Farm gave Bobbie a set of silks in the colours that he used to race in, and they’ll be attending the Makeover to watch him go. 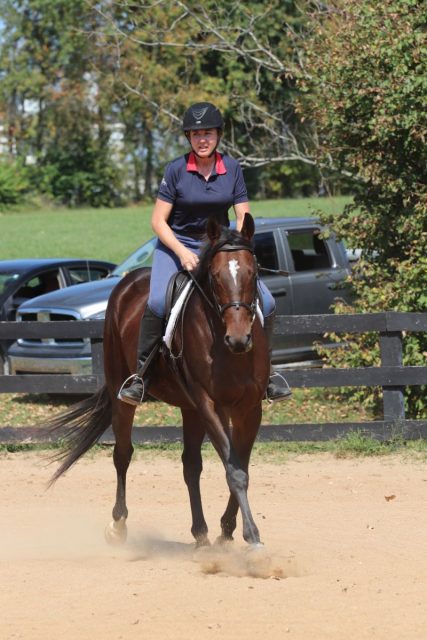 Carol Deeble and West of Denali. Photo by Samantha Clark.

Carol Deeble is riding West of Denali in the hunter/jumper division. She only got him in March after he retired last year with two wins from 22 starts and about $47,000 of earnings. Carol is an event rider, but with the time crunch and her horse’s laid back personality, she decided to switch to hunter/jumpers for the Makeover.

“He’s got a really good tempo at the canter, that’s his strong point, he stays really consistent, really quiet. Being around horses and stuff does not phase him one bit. The biggest issue I have with him is just getting enough energy out of him to keep him going!” 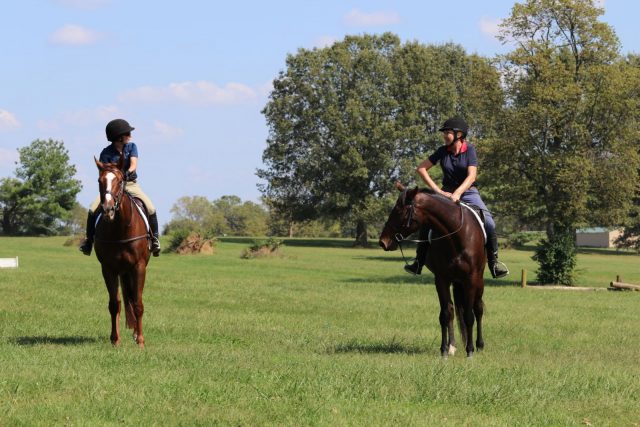 Carol saw West of Denali on a Facebook ad, and travelled up to Michigan to meet him, and she jokes, “The rest is History!” It will be her first attempt at the Makeover, but she works in the USEF office at the Horse Park so she’s seen it before. “I’ve gotten to see it a couple of times and thought what a great thing it is. I love Thoroughbreds, I’ve always had thoroughbreds and it’s something I really wanted to try.” 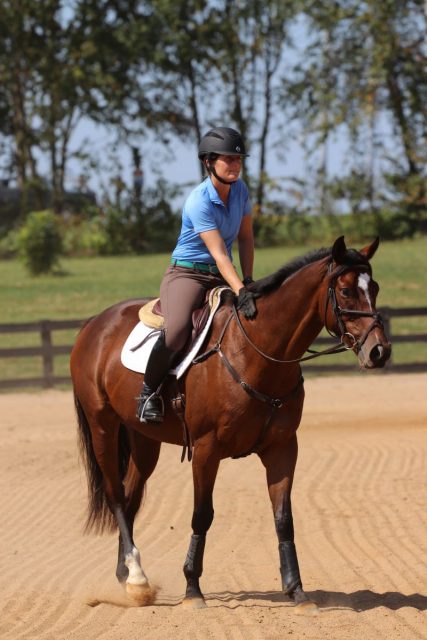 Jenn O’Neill runs Lucky Dog Eventing out of Haylands Farm here in Lexington; she is renowned for consistently picking and producing some exceptionally nice OTTBs, and her entry in the Makeover, Nucifera, is no exception.

Nucifera has been snapped up already by her client Tess Utterback. Tess is retiring her older 15-hand Paint gelding this year, and their plan was to go to Ireland this October and buy her a proper event horse, but as fate would have it, she rode Nucifera once and declared, “I have to have him!”

According to Jenn, “Tess is a self-proclaimed nervous amateur, but that horse gives her so much confidence, he gives her wings! She NEVER EVER wanted a Thoroughbred. Funny how one horse can change your entire stereotype,” and she added, “This horse is such a class act; I’m so fortunate to still be riding him.” 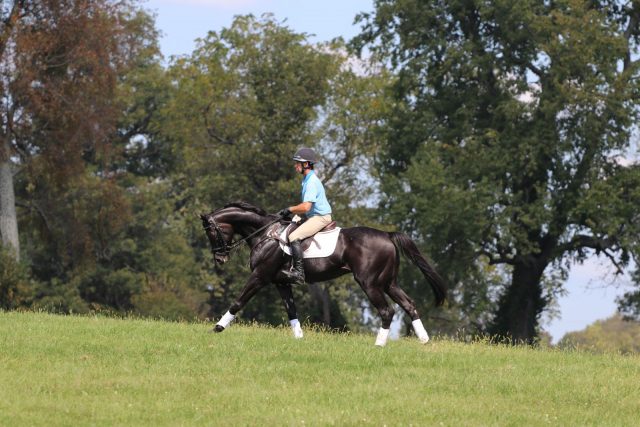 Nick Larkin and Love’s Not Fair. Photo by Samantha Clark.

New Zealand event rider, Nick Larkin, who won the inaugural CCI4* at Rolex in 1998 on Red, is back! He’s moved to a new farm here in Lexington, and after a break from eventing he’s excited to plunge back in and start competing seriously again. His Makeover entry belongs to Megan Sanders and is seriously fancy.

Lebron’s Jockey Club name is Love’s Not Fair and he’s by Fairbanks; he last raced in July of 2016 and won five races out of 36 starts, earning just over $123,000. His owner Megan Sanders knew she wanted him as soon as she saw him.

Kelly Murphy-Alley will be competing Storm Prospector in the barrel racing division, and he will be for sale on Sunday. 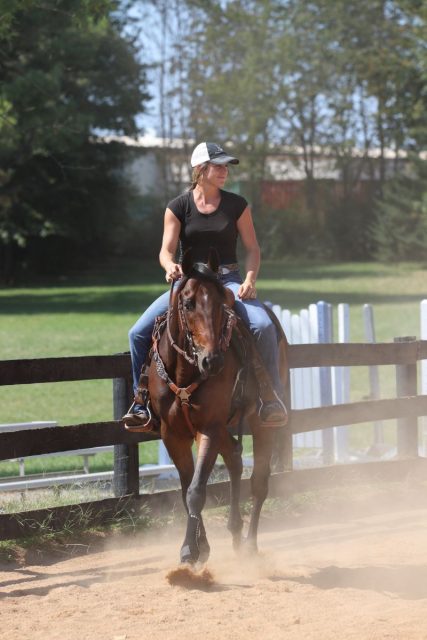 I watched Kelly ride him in the arena, tie him up to the trailer while she hauled her own barrels or sat and played with her baby, and I couldn’t have been more impressed by either of them; they’re a class couple. And those boots…!

It was such a pleasure to talk to all these riders and listen to them wax lyrical about their lovely Thoroughbreds. Each one mentioned their horse’s brain and temperament, and the whole afternoon was a testament to the versatility of the OTTB.

The RRP Makeover website is chock-full of information about each horse, and some fascinating statistics on the competition — you can easily lose an hour or two browsing it, and I highly encourage you to do so!

If you do make it here to the Horse Park next weekend, try to catch Rosie Napravnik talking at 10 a.m. on Thursday in the Club Lounge, or Dan James and Tik Maynard at 1 p.m. Tik will also be presenting Freestyle 101 on Sunday, and Nick Larkin will be doing cross country schooling that day too.

If this was just the preview, I can’t imagine how much fun next weekend will be and wish all the competitors the very best of luck. With thanks to Thoroughbred Charities of America for their sponsorship of the event, and to all the various retraining and rehoming programmes and individuals who work so tirelessly to promote the ex-racehorse.