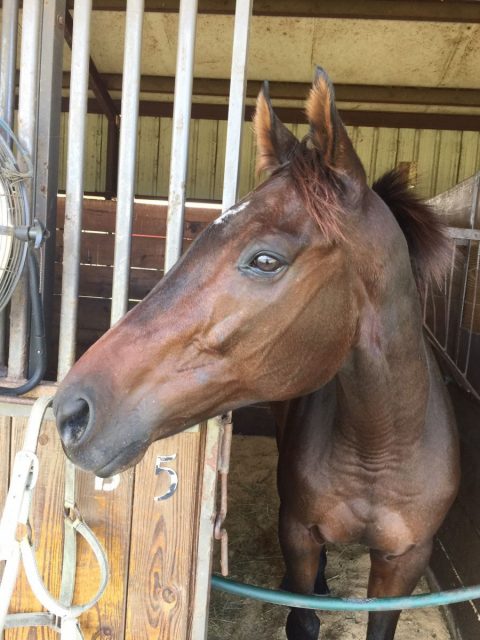 Immortal Wink, who was running in Puerto Rico last year, enjoys retirement in his home state of Florida.

The Thoroughbred Retirement Foundation is using its annual Hay Drive to assist efforts to feed nearly 900 horses at Camarero racetrack in Canovanas, Puerto Rico. The track, which is located about 15 miles southeast of San Juan, was devastated by Hurricane Maria, leaving the horses stranded in barns where the roofs had been ripped off, without access to sufficient food and fresh water.

“In the spirit of horse organizations helping each other,” TRF will give 50 percent of Hay Drive donations received between now and Sunday, Oct. 1, to Caribbean Thoroughbred Aftercare Inc.

Diana Pikulski, TRF’s national director of major giving, said the group decided to work with the CTA because the two organizations have partnered before. In June 2016, TRF and CTA joined forces to bring home Immortal Wink, a 10-year-old Florida-bred gelding running in Puerto Rico, and retire him to a TRF facility in the United States.

“We worked with them before and we know how hard they work and we know what they’re up against on a good day in the Caribbean, with the number of horses that are down there and the circumstances for keeping horses there,” Diana explained. “We know how hard it is and how incredibly expensive it is and how little land there is to keep horses. It’s amazing the job they do.”

Shelley Blodgett, CTA co-founder, told Thoroughbred Daily News, “There are 864 U.S. Thoroughbreds (all Jockey Club registered) stabled at Hipodromo Camarero Racetrack. … The racetrack, including the barns, was heavily damaged during Hurricane Maria. Further, the horses cannot leave their stalls due to debris, downed fencing and flooding.”

Having worked with CTA before, Pikulski and the TRF knew that the best and fastest way to get help to the horses in Puerto Rico would be to utilize the fundraising mechanism of its own annual hay drive, which was already underway, and to reach out to those who were already well acquainted with the problems of horse care in the Caribbean.

“We thought having somebody who was there, knowing exactly what the logistics are — horse people on the ground — seemed like the best option for us,” she said. “And that was also why we felt lucky that we had a partnership there already, because from our end we wouldn’t know what to do.”

This is the ninth year of the TRF’s Hay Drive, which began on Sept. 11. Donations for horses in Puerto Rico will be accepted through Oct. 1, but overall fundraising efforts will continue until the organization’s original goal of $300,000 to provide wintertime forage for its own herd of nearly 800 horses, at 24 retirement facilities spread across nine states, is met.

This year’s drive kicked off with an announcement that every donation up to a total of $50,000 would be matched by the Geoffrey Hughes Foundation, a charitable organization based in New York City.

Besides the TRF, other horse welfare organizations and industry groups are working tirelessly to help the horses in Puerto Rico and other parts of the Caribbean that also suffered the disastrous impact of this month’s series of hurricanes.

Keith Klein, the director of industry relations for the American Association of Equine Practitioners, told Daily Racing Form that the AAEP was coordinating with the United States Department of Agriculture to provide supplies to horses in Puerto Rico and the Virgin Islands, where three other racetracks suffered heavy damage. However, efforts have been hampered by the widespread power outages and communications problems that have complicated general relief efforts for residents.

Other organizations providing funds and assistance include The Jockey Club and the United States Equestrian Federation. Daily Racing Form reported that The Jockey Club will be making its own donation to the AAEP. Meanwhile, the USEF announced that it is extending the appeals for contributions to its Equine Disaster Relief Fund, which recently received more than $400,000 for victims of Hurricane Harvey.

Pikulski said that Immortal Wink, a war horse who ran 142 times and earned just over $110,000, is now at Lowell Correctional Institution, the TRF’s facility in Ocala, and is “one of our all-time favorites.”

“We just thought, ‘Wow, the horses that are still down there really, really need some help and we have a great story, we have a great following, we have a connection with this organization that does incredible work in the Caribbean, so here’s an opportunity for us to help.’”

Click here to buy a bale of hay (or two! or more!) to aid Puerto Rican horses impacted by the devastation of Hurricane Maria.